Hersham and Walton Motors (HWM) is the world's longest established Aston Martin business (having acquired the franchise in 1951) and is well known as a racing car constructor. As a constructor, it is best known for its involvement in Formula Two from 1950 to 1953 and Formula One in 1954. When HWM owners George Abecassis and John Heath went racing together from 1946 and in 1948 they built a streamlined sports racing car on the chassis of a Sports Alta, and thus embarked upon the construction of racing cars and racing sports cars at their motor works in Walton-on-Thames, England. The 1948 car gave them encouraging results and so new car, this time called an HW-Alta, was constructed and raced in 1949; this car was sufficiently successful to convince the partners to embark upon building a full team of cars for the 1950 Formula Two season of British and continental events: these cars were known as HWMs.

From 1950 to 1952, HWM achieved remarkable success in Formula Two for a team that was run on very little money and yet which faced the might of continental marques in every race. By 1953 they were outclassed, but when the international Formula changed in 1954, John Heath constructed a works car to compete in Formula One. HWM abandoned the new Formula One after two appearances as their car was seriously outclassed. Meanwhile, the first Jaguar-engined HWM sports racing car had appeared in 1953, and this had some success with Abecassis at the wheel. From then on until 1957, the team was involved in sports car racing both in Britain and on the continent, sometimes beating their Jaguar and Aston Martin Works competitors. After John Heath was killed on the 1956 Mille Miglia in Italy in an HWM Works car, Abecassis did not wish to continue and the works racing programme continued for just a year.

Results of other HWM cars

Christian Fittipaldi is a Brazilian former racing driver who has competed in various forms of motorsport including Formula One, Champ Car and NASCAR. Named after the less known Brazilian driver Christian Heins, he was a highly rated young racing driver in the early 1990s, and participated in 43 Formula One Grands Prix for Minardi and Footwork between 1992 and 1994.

Raymond Sommer was a French motor racing driver. He raced both before and after WWII with some success, particularly in endurance racing. He won the 24 Hours of Le Mans endurance race in both 1932 and 1933, and although he did not reach the finishing line in any subsequent appearance at the Le Mans, he did lead each event until 1938. Sommer was also competitive at the highest level in Grand Prix motor racing, but did not win a race. He won the French Grand Prix in 1936, but the event that year was run as a sports car race. After racing resumed in the late 1940s, Sommer again won a number of sports car and minor Grand Prix events, and finished in fourth place in the 1950 Monaco Grand Prix, the second round of the newly-instituted Formula One World Drivers' Championship. He was killed toward the end of 1950, when his car overturned during a race at the Circuit de Cadours.

The Alta Car and Engineering Company was a British sports and racing car manufacturer, commonly known simply as Alta. Their cars contested five FIA World Championship races between 1950 and 1952, as well as Grand Prix events prior to this. They also supplied engines to a small number of other constructors, most notably the Connaught and HWM teams. 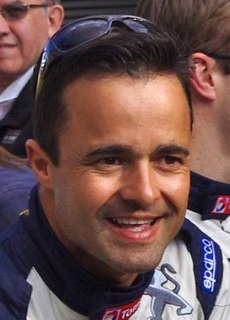 George Edgar Abecassis was a British racing driver, and co-founder of the HWM Formula One team.

Johannes "Jan" Lammers is a racing driver and team principal from the Netherlands.

Marius Aristide Yves Giraud-Cabantous was a racing driver from France. He drove in Formula One from 1950 to 1953, participating in 13 World Championship Grands Prix, plus numerous non-Championship Formula One races.

William Michael "Mike" Wilds is a British racing driver from England. He participated in eight Formula One World Championship Grands Prix, debuting on 20 July 1974. He scored no championship points. 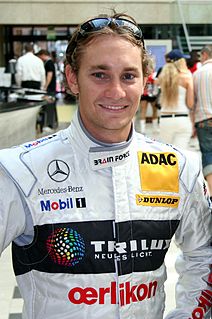 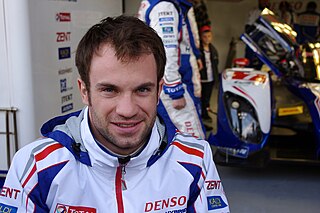 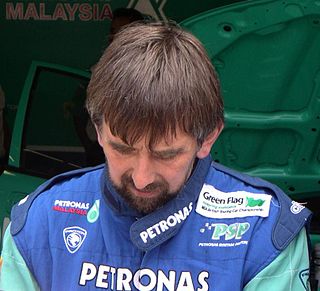 David Leslie was a Scottish racing driver. He was most associated with the British Touring Car Championship, in which he was runner-up in 1999. He was particularly noted for his development skill, helping both Honda and Nissan become BTCC race winners. He was born in Dumfries, Scotland.

Franz Konrad is a former race driver and founder of Konrad Motorsport in 1976.

Peter Kox is a racecar driver from the Netherlands.

The Aston Martin DBR4/250, commonly referred to simply as the DBR4, is a Formula One racing car, designed by Ted Cutting for the sports car manufacturer Aston Martin. Following notable successes in sports car racing during the mid- to late-1950s — culminating in winning the 24 Hours of Le Mans endurance race and the World Sportscar Championship title in 1959 — the DBR4 was intended to repeat this success in the highest tier of open-wheel racing. 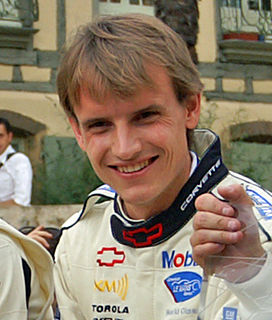 Antonio García Navarro is a Spanish professional racing driver. He has three class wins in the 24 Hours of Le Mans, winning GT1 with Aston Martin Racing in 2008 and with Corvette Racing in 2009 (GT1) and 2011 (GTE-Pro).