The Taunus is a mountain range in Hesse, Germany, located north of Frankfurt. The tallest peak in the range is Großer Feldberg at 878 m; other notable peaks are Kleiner Feldberg (825 m) and Altkönig (798 m).

The Taunus range spans the districts of Hochtaunuskreis, Main-Taunus, Rheingau-Taunus, Limburg-Weilburg, and Rhein-Lahn. The range is known for its geothermal springs and mineral waters that formerly attracted members of the European aristocracy to its spa towns. The car line Ford Taunus is named after it. [1]

It is a relatively low range, with smooth, rounded mountains covered with forest. The Taunus is bounded by the valleys of the Rhine, Main, and Lahn rivers and it is part of the Rhenish Slate Mountains. On the opposite side of the Rhine, The Taunus range is continued by the Hunsrück.

For geographical, ecological and geological purposes the Taunus is divided in three parts:

The Taunus range originated during the Devonian period. [2] The geological composition of the mountains was formed in a region covered by an ancient sea that was a few hundred kilometers wide and are mainly made up of phyllite, greenschist, gneiss, slates, and sandstone. [3]

The Roman Limes was built across the Taunus. The Saalburg, a restored Roman castellum, now houses a museum.

After the fall of the Limes (in 259/260 AD), the Alamanni settled in the range and for this reason there are some Alemannic cemeteries in the southern foothills of the Taunus (Eschborn). This area of the Taunus became part of the Frankish confederation of Germanic tribes after the Battle of Tolbiac around 500 AD. [4]

In past centuries the Taunus became famous among aristocrats for its therapeutic hot springs. [5]

Certain towns in the area, such as Bad Homburg vor der Höhe with its Kurpark, have geothermal spas that were formerly renowned. Other spa towns in the Taunus range are Bad Schwalbach (formerly Langenschwalbach) mentioned in documents dating back to the 16th century, Bad Ems, one of the most reputed therapeutic spas in Germany since the 17th century, as well as Bad Weilbach, where a spring reached wide fame for some time. By the 19th century the most famous spa towns in the area were Wiesbaden, Bad Homburg vor der Höhe, Bad Nauheim, and Bad Soden am Taunus. [6]

Main-Taunus is a Kreis (district) in the middle of Hessen, Germany and is part of the Frankfurt/Rhine-Main Metropolitan Region as well as the Frankfurt urban area. Neighboring districts are Hochtaunuskreis, district-free Frankfurt, Groß-Gerau, district-free Wiesbaden, Rheingau-Taunus. It is the second most densely populated rural district in Germany. 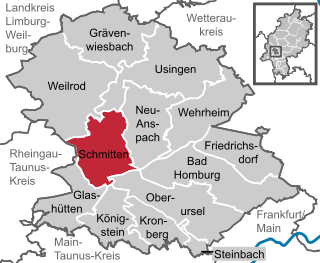 Schmitten is a climatic spa and municipality in the Hochtaunuskreis in Hessen, Germany. 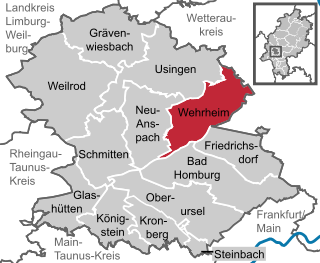 Wehrheim is a municipality in Hesse, Germany some 30 km (20 mi) north of Frankfurt am Main. 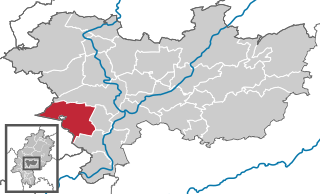 Rosbach vor der Höhe is a town in the district of Wetteraukreis, in Hesse, Germany. It is located 25 kilometres north of Frankfurt am Main, on the eastern side of the Taunus mountain range. The town has a population of approximately 12,000.

Steinbach is a town in the Hochtaunuskreis that borders Frankfurt am Main to the east. Other neighbouring towns are Oberursel, Kronberg im Taunus and Eschborn. It is in the German state of Hesse. 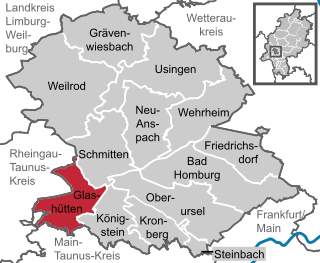 Glashütten is a small municipality in the Hochtaunuskreis. This community in the Taunus, which is made up of the three formerly independent communities of Glashütten, Schloßborn and Oberems, lies in the Hochtaunus Nature Park, not far from Königstein im Taunus, Germany.

The Taunus Railway in the High Taunus is a railway route between Frankfurt (Main) Hauptbahnhof and Brandoberndorf via Bad Homburg, Usingen and Grävenwiesbach. It was operated from 1993 to 1995 by the Frankfurter Verkehrsverbund as the T-Bahn and subsequently by the Rhein-Main-Verkehrsverbund as line 15. It is listed in table 637 of the Deutsche Bahn timetable. The Friedrichsdorf–Brandoberndorf line, which has the infrastructure number of 9374, forms part of the old Friedrichsdorf–Wetzlar line, which was known as the Taunusbahn. The line is owned by the Verkehrsverband Hochtaunus. The infrastructure is managed by HLB Basis AG on behalf of the VHT.

Bundesstraße 455 is a German Bundesstraße in the federal state of Hesse. The route runs southwest from Schotten in Vogelsbergkreis to Mainz-Kastel, a borough of the Hessian capital city of Wiesbaden.

The Frankfurter Neue Presse (FNP) is a German daily newspaper, based in Frankfurt am Main and focused on local and regional topics. 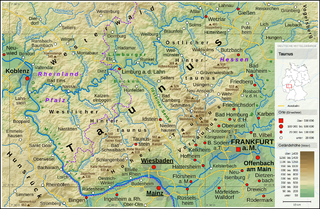 The High Taunus is the name of a major natural region unit in the Hessian Central Uplands range of the Taunus mountains and forms the area immediately around the main ridge of the Taunus. It should not be confused with the term Hochtaunus, in the sense used in the name of the county of Hochtaunuskreis which is only the eastern part of the Feldberg massif. The High Taunus separates the Anterior Taunus in the south from the Lower Taunus in the north and includes the majority of the highest mountains and hills of the Taunus. The eastern part of the natural region lies within the Taunus Nature Park and its western part in the Rhine-Taunus Nature Park. 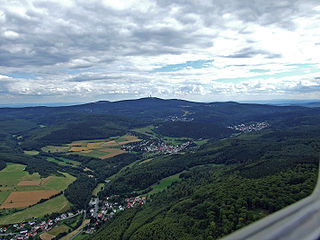 The Taunus Nature Park is a nature park in Central Germany with an area of 134,775 hectares (1347.75 km²) in the Central Upland range of the Taunus. It is one of two Hessian nature parks in the Taunus and the second largest nature park in Hesse.

Usingen station is the station of Usingen in the German state of Hesse) and the operations centre of the Taunus Railway from Brandoberndorf via Grävenwiesbach and Usingen to Bad Homburg. The entrance building is heritage-listed.