Last updated May 03, 2021
Specialized resort town situated around a mineral spa
This article is about a town around a spa. For other uses, see Spa (disambiguation).

A spa town is a resort town based on a mineral spa (a developed mineral spring). Patrons visit spas to "take the waters" for their purported health benefits. The word spa is derived from the name of Spa, a town in Belgium.

Thomas Guidott set up a medical practice in the English town of Bath in 1668. He became interested in the curative properties of the hot mineral waters there and in 1676 wrote A Discourse of Bathe, and the Hot Waters There. Also Some Enquiries Into the Nature of the ￦ater. This brought the purported health-giving properties of the waters to the attention of the aristocracy, who started to partake in them soon after. [1]

The term spa is used for towns or resorts offering hydrotherapy, which can include cold water or mineral water treatments and geothermal baths. [2]

Most of the mineral springs in Australia are in the Central Highlands of Victoria, although there are a few springs in South Australia, Moree, New South Wales and Queensland. Most are within 30 km of Daylesford, Victoria: the Daylesford and Hepburn Springs call themselves 'Spa Country' and the 'Spa Centre of Australia'. [3]

See: List of spa towns in Bosnia and Herzegovina

Bulgaria is known for its more than 500 mineral springs, including the hottest spring in the Balkans at Sapareva Banya - 103 °C. Other famous spa towns include Sandanski, Hisarya, Bankya, Devin, Kyustendil, Varshets, Velingrad.

In Bulgarian, the word for a spa is баня (transliterated banya).

Harrison Hot Springs is one of the oldest among 18 in British Columbia; there are also two in Alberta and one in Ontario.

In Croatia, the word Toplice implies a spa town. The most famous spa towns in Croatia are Daruvar, Šibenik and Sisak.

In the Czech Language, the word Lázně implies a spa town. The most famous spa towns in Czech Republic are Teplice and the West Bohemian Spa Triangle of Karlovy Vary, Františkovy Lázně and Mariánské Lázně.

In France, the words bains, thermes, and eaux in city names often imply a spa town. There are more than 50 spa towns in France, including Vichy, Aix-les-Bains, Bagnoles-de-l'Orne, Dax, and Enghien-les-Bains.

Borjomi is one such example in south Georgia.

In Hungary, the word fürdő or the more archaic füred ("bath"), fürdőváros ("spa town") or fürdőhely ("bathing place") implies a spa town. Hungary is rich in thermal waters with health benefits, and many spa towns are popular tourist destinations. Budapest has several spas, including Turkish style spas dating back to the 16th century. Eger also has a Turkish spa. Other famous spas include the ones at Hévíz, Harkány, Bük, Hajdúszoboszló, Gyula, Bogács, Bükkszék, Zalakaros, the Cave Bath at Miskolctapolca and the Zsóry-fürdő at Mezőkövesd.

In Italy, spa towns, called città termale (from Latin thermae), are very numerous all over the country because of the intense geological activity of the territory. These places were known and used since the Roman age.

Most spa towns in Poland are located in the Lesser Poland and Lower Silesian Voivodeships. Some of them have an affix "Zdrój" in their name (written with hyphen or separately), meaning "water spring", to denote their spa status, but this is not a general rule (e.g. Ciechocinek and Inowrocław are spa towns, but do not use the affix).

Portugal is well known by famous spa towns throughout of the country.

Due to its high quality, as well as the landscape where are located, the most important ones are:

Serbia is known for its many spa cities. Some of the best known springs are the Vrnjačka Banja, Bukovička Banja, Vrujci, Sokobanja and Niška Banja. The hottest spring in Serbia is at Vranjska Banja (96°C) [4]

In Serbia, the word Banja implies a spa town.

Slovakia is well known by its spa towns. The most famous is the city of Piešťany in Trnava Region. Other notable spa towns in Slovakia include:

Spa towns in Spain include:

Taiwan is home to a number of towns and cities with tourism infrastructure centered on hot springs. These include:

Main article: List of spa towns in the United Kingdom

Some but not all UK spa towns contain "Spa", "Wells", or "Bath" in their names, e.g., Matlock Bath. Some towns are designated Spa Heritage Towns. Two out of three of the English towns granted the title "Royal", Royal Leamington Spa and Royal Tunbridge Wells, are spa towns. 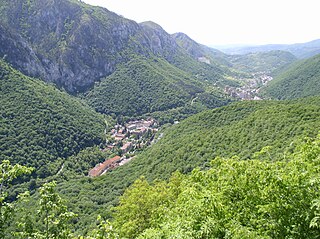 Băile Herculane is a town in Romanian Banat, in Caraș-Severin County, situated in the valley of the Cerna River, between the Mehedinți Mountains to the east and the Cerna Mountains to the west, elevation 168 meters. Its current population is approximately 5,000. The town administers one village, Pecinișca.

Évian-les-Bains, or simply Évian, is a commune in the northern part of the Haute-Savoie department in the Auvergne-Rhône-Alpes region in Southeastern France. In 2018, it had a population of 9,100. 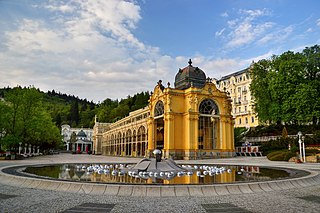 Mariánské Lázně is a spa town in Cheb District in the Karlovy Vary Region of the Czech Republic. It has about 13,000 inhabitants. The town, surrounded by green mountains, is a mosaic of parks and noble houses. Most of its buildings come from the town's Golden Era in the second half of the 19th century, when many celebrities and top European rulers came to enjoy the curative carbon dioxide springs. 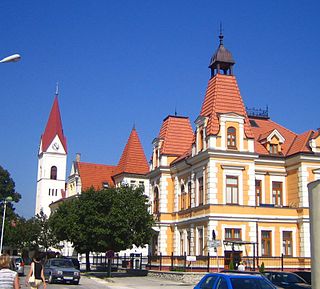 Trenčianske Teplice is a health resort and small spa town in western Slovakia, in the valley of the river Teplička, at the foothills of the Strážovské vrchy mountains. Just a few kilometres away from the city Trenčín.

A spa is a location where mineral-rich spring water is used to give medicinal baths. Spa towns or spa resorts typically offer various health treatments, which are also known as balneotherapy. The belief in the curative powers of mineral waters goes back to prehistoric times. Such practices have been popular worldwide, but are especially widespread in Europe and Japan. Day spas are also quite popular and offer various personal care treatments. 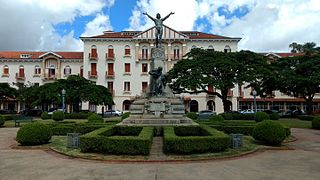 Poços de Caldas is a municipality in the south of Minas Gerais state, Brazil, in the microregion of the same name. Its estimated population in 2020 was 168,641 inhabitants. The city has hot springs. 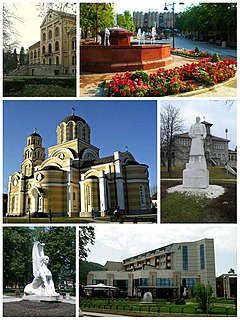 Aranđelovac is a town and a municipality located in the Šumadija District of central Serbia. As of 2011, the municipality has a population of 46,225 inhabitants, while the town has 24,797 inhabitants.

Františkovy Lázně is a spa town in Cheb District in the Karlovy Vary Region of the Czech Republic. It has about 5,500 inhabitants. Together with neighbouring Karlovy Vary and Mariánské Lázně, it is part of the renowned West Bohemian Spa Triangle. The town centre is well preserved and historically significant and since 1992 is protected by law as urban monument reservation. It was nominated for inclusion in the UNESCO World Heritage roster. 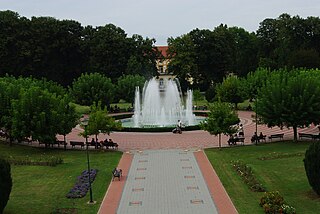 Banja Koviljača is a popular tourist spot and spa town located in the city of Loznica, Serbia. Situated on the west border of Serbia by the Drina River and 137 kilometres (85 mi) from Belgrade, it is the oldest spa town in Serbia. As of 2011 census, it has 5,151 inhabitants. 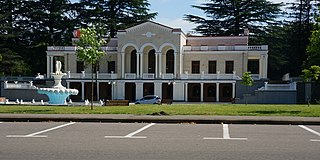 Tskaltubo is a spa resort in west-central Georgia. It is located at around 42°20′23″N42°35′57″E. It is the main town of the Tsqaltubo Municipality of the Imereti province. It is known for its radon-carbonate mineral springs, whose natural temperature of 33–35 °C (91–95 °F) enables the water to be used without preliminary heating.

Rimske Toplice is a settlement in the Municipality of Laško in eastern Slovenia. It lies on the right bank of the Savinja River on the road from Celje to Ljubljana via Zidani Most. The area is part of the traditional region of Styria. It is now included with the rest of the municipality in the Savinja Statistical Region.

Termas de Chillán is a town located 82 km east of the Chilean city of Chillán. It has a ski center and three hotels.

Aulus-les-Bains is a commune in the Ariège department in the Occitanie region of south-western France.

Ovčar Banja is a village and a spa located in the city of Čačak, Serbia. Located near the Ovčar-Kablar Gorge in the valley of the West Morava, it is known as the "Serbian Mount Athos" because of the numerous monasteries situated in this area. As of 2011 census, it has a population of 122 inhabitants.