Thomas Richardson House is a historic home located at Ilion in Herkimer County, New York. It was built around 1873, and is a brick structure with an asymmetrical rectangular plan in the Italianate style. The two-story main block has a hipped roof and 3 two-story projecting bays with clipped gable roofs covered in slate. It features a three-story tower with a two-tiered, concave mansard roof. The property includes the original carriage house and landscaping. [2]

It was listed on the National Register of Historic Places in 1984. [1]

It is now owned by YouTube and Netflix personality Christine McConnell. 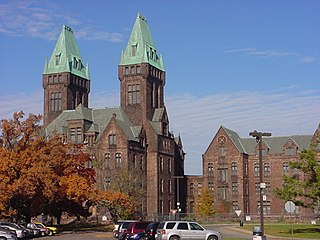 The Richardson Olmsted Campus in Buffalo, New York, United States, was designated a National Historic Landmark in 1986. The site was designed by the American architect Henry Hobson Richardson in concert with the famed landscape team of Frederick Law Olmsted and Calvert Vaux in the late 1800s, incorporating a system of enlightened treatment for people with mental illness developed by Dr. Thomas Story Kirkbride. Over the years, as mental health treatment changed and resources were diverted, the buildings and grounds began a slow deterioration. In 2006, the Richardson Center Corporation was formed to restore the buildings. 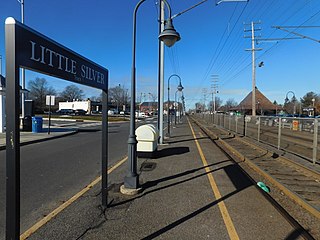 Little Silver is a railway station in Little Silver, Monmouth County, New Jersey, United States. It is served by trains on NJ Transit's North Jersey Coast Line. The station is located in between two grade crossings, and trains can back up traffic when they stop at the station. 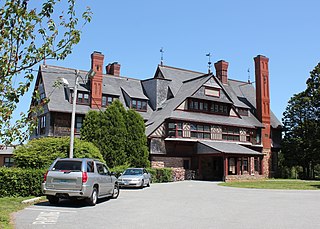 The William Watts Sherman House is a notable house designed by American architect H. H. Richardson, with later interiors by Stanford White. It is a National Historic Landmark, generally acknowledged as one of Richardson's masterpieces and the prototype for what became known as the Shingle Style in American architecture. It is located at 2 Shepard Avenue, Newport, Rhode Island and is now owned by Salve Regina University. It is a contributing property to the Bellevue Avenue Historic District. 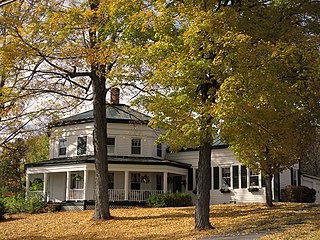 The Jenkins Octagon House is an historic octagon house located on NY 395 in Duanesburg, Schenectady County, New York. It was built about 1855 by noted master carpenter Alexander Delos "Boss" Jones. It is a two-story, clapboard-sided farmhouse with Greek Revival style features. It features innovative stacked plank construction, a low-pitched polygonal roof with a central chimney, a full entablature circling the structure, and a one-story porch with a hipped roof. Also on the property are two contributing barns, a shed, and a gazebo.

The building at 38–48 Richardson Avenue is a historic residential rowhouse in Wakefield, Massachusetts. Built c. 1912, is believed to be one of the oldest rowhouses in the town. They were built by Solon O. Richardson, Jr., on a portion of his family's estate. The building was listed on the National Register of Historic Places in 1989.

The buildings at 35–37 Richardson Avenue are historic rowhouses in Wakefield, Massachusetts. These two rowhouses, built c. 1912–15, are among the earliest apartment blocks built in the town. They were built by Solon O. Richardson, Jr. on a portion of his estate. The buildings were listed on the National Register of Historic Places in 1989. 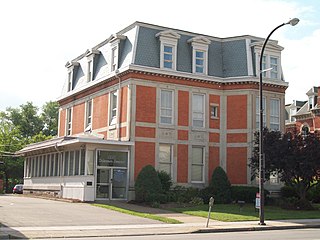 William Dorsheimer House is a historic home located at Buffalo in Erie County, New York, that was listed on the National Register of Historic Places in 1980.

Richardson-Bates House is a historic home located at Oswego in Oswego County, New York. It is constructed primarily of brick and built in two stages. The main section is a ​2 1⁄2-story, Tuscan Villa style brick residence with a gable roof and 4-story tower designed by architect Andrew Jackson Warner about 1867. The interior features carved woodwork by Louis Lavonier. The South wing addition included a private library, formal dining room and kitchen that was completed in 1889. 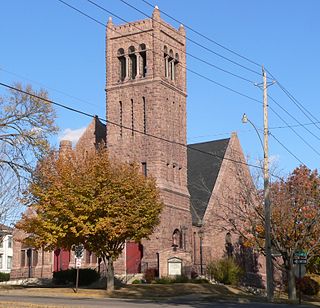 St. Thomas Episcopal Church is a parish church in the Episcopal Diocese of Iowa. The church is located in Sioux City, Iowa, United States. The church building was listed on the National Register of Historic Places in 1984.

James L. Dix House is a historic home located at Glens Falls, Warren County, New York. It was built in 1866 and is a two-story, hip-roofed, brick vernacular residence with Italianate and Colonial Revival style design elements. It consists of a three-bay main block with a two-story, gable-roofed service wing. 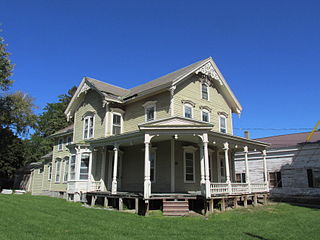 Thomas Stilwell House is a historic home located at Glens Falls, Warren County, New York. It was built about 1875 and is a rectangular, two and one half-story, frame residence with a gable roof and sheathed in clapboards. It features a raised, bracketed one-story porch with balustrade and ornate scroll-sawed fretwork. It is representative of a modest transitional Italianate – Eastlake style.

Gaige Homestead is a historic home located at Duanesburg in Schenectady County, New York. The house was built about 1830 and is a rectangular two story, five bay frame building in a vernacular Federal style. It has a one-story, gable roofed side wing. It features a gable roof with cornice returns, a recessed central entrance, and two brick interior end chimneys. Also on the property are two sheds, a carriage house, and a shop building.

Thomas Liddle Farm Complex is a historic home and farm complex located at Duanesburg in Schenectady County, New York. The farmhouse was built about 1850 and is a 2-story, three-bay clapboard-sided frame building in a vernacular Greek Revival style. It has a gable roof, prominent cornice returns, a wide frieze, and broad, fluted corner pilasters. The ​1 1⁄2-story rear wing dates to the late 18th century. Also on the property are a contributing barn and a tenant house. 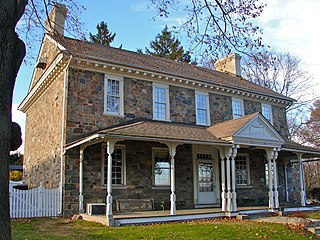 Glynrich is the site for two historic homes: the Richard Richardson House and the Brick Mill House. They are located at Wilmington, New Castle County, Delaware. The Brick Mill House, also known as the John Richardson House, was built about 1723, and is a two-story, three-bay, gable roof brick structure with Flemish bond and glazed headers on the facade rising from a full raised basement. It has a one-bay, hipped roof, wooden entrance porch. The Richard Richardson House was built in 1765, and is a two-story five-bay, center-hall, double pile with a lower single pile two-story wing at the east end. It is in the Georgian style. It has a five-bay, hipped roof Georgian Revival porch added around 1900. The property was the site of extensive milling activities on the Mill Creek in the 18th and 19th centuries.

The John Richardson Homestead is a historic house on Hancock Road in Dublin, New Hampshire, United States. Built about 1798, it is a well-preserved example of a modest Federal period farmhouse. The house was listed on the National Register of Historic Places in 1983. 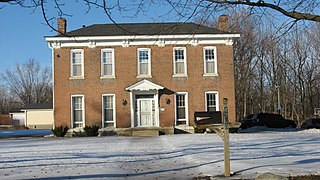 Thomas Moore House, also known as the Moore-Christian House, is a historic home located at Indianapolis, Indiana. It was built in the 19th century, and is a two-story, five bay, "L"-shaped, Italianate style brick dwelling. It has a low hipped roof with double brackets and segmental arched openings. At the entrance is a gable roofed awning with large, ornate brackets and ornate Queen Anne style scrollwork design on the gable front.

The Jacob F. Richardson House, at 205 Park Ave. in Park City, Utah, was built around 1888. It was listed on the National Register of Historic Places in 1984. 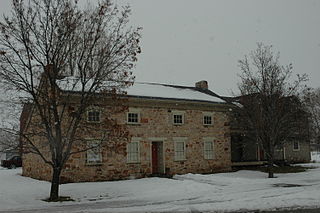 The William D. Skeen House is a historic house in Plain City, Utah. It was built in 1862 for William D. Skeen, a Pennsylvania-born pioneer who converted to The Church of Jesus Christ of Latter-day Saints in 1850. Skeen had two wives: his first wife, Caroline, was an immigrant from England, while his second wife, Mary Davis, was an immigrant from Wales. The house was built with the help of two other Mormon pioneers: William Sharp, the stonemason, and Thomas Singleton, a carpenter. The house was purchased in 1868 by Ebenezer C. Richardson, who lived here with his four wives and 12 children. It has been listed on the National Register of Historic Places since August 9, 1982.

Washington Post, Realestate: Historic houses for sale across the country