Tonawanda Municipal Building is a historic municipal building located at Kenmore in Erie County, New York. It was designed by the noted Buffalo architecture firm Green and James and built in 1936 with funds provide by the Works Progress Administration. It is a two-story, steel frame and brick building clad in limestone with Art Deco design elements. The building serves as home to both the Village of Kenmore and Town of Tonawanda governments. [2]

It was listed on the National Register of Historic Places in 2013. [1] 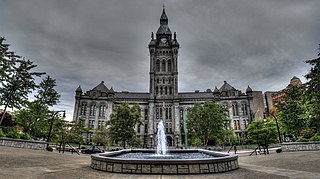 Amherst is a town in Erie County, New York, United States. Amherst is the most populated town in western New York, and an inner ring suburb of Buffalo. As of the 2010 census, the town had a total population of 122,366. This represents an increase of 5.0% from the 2000 census. 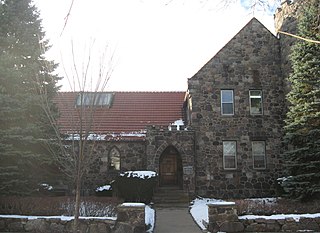 East Aurora is a village in Erie County, New York, United States, southeast of Buffalo. It lies in the eastern half of the town of Aurora. The village population was 6,236 at the 2010 census. It is part of the Buffalo–Niagara Falls Metropolitan Statistical Area. In 2015, East Aurora was rated the third-best town to raise a family in New York State by Niche. According to the National Council of Home Safety and Security, it is also among the safest places to live in New York State. 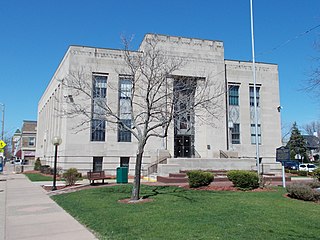 Kenmore is a village in Erie County, New York, United States. The population was 15,423 at the 2010 census. It is part of the Buffalo–Niagara Falls metropolitan area. 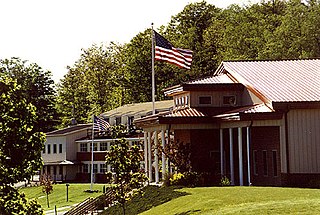 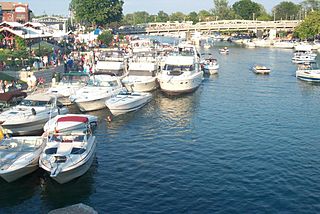 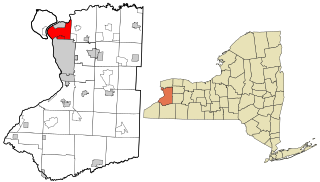 New York State Route 265 (NY 265) is a 19.75-mile (31.78 km) long state highway located in the western part of New York in the United States. NY 265 is a north–south route that roughly parallels the western parts of the Niagara River in Erie County and Niagara County. For much of its southern course, it is more frequently referred to by its longtime name, Military Road, which dates back to 1801 as a road to connect the city of New Amsterdam and Fort Niagara near Lake Ontario.

Electric Tower is a historic office building and skyscraper located at the corner of Washington and Genesee Streets in Buffalo. It is the seventh tallest building in Buffalo. It stands 294 feet (89.6 m) and 14 stories tall and is in the Beaux-Arts Classical Revival style. It was designed by James A. Johnson and built in 1912. The tower was based upon an earlier Electric Tower constructed for the 1901 Pan-American Exposition; as with most of the buildings constructed for that event, the original was only temporary and demolished shortly after the fair ended. Additions were made in 1923 and 1928. The white terra-cotta clad was originally built as the Niagara Mohawk Building and features an octagonal tower which steps back three times to terminate in a large lantern. It is also known as Iskalo Electric Tower, for the real estate development company that owns the building.

Kibler High School is a historic high school building located at the city of Tonawanda in Erie County, New York. It was designed by the Buffalo architectural firm of Edward B. Green, & Sons and constructed from 1925 to 1927 in the Classical Revival style. The exterior features a rusticated ground floor, central entrance pavilion with pilasters and pediment, an elaborately decorated cupola, and red tile hip roofs. The school was named for the president of the Tonawanda Board of Education in 1924, William J. Kibler. The building functioned as a school until 1983. The building was renovated as senior housing in the mid-2000s. 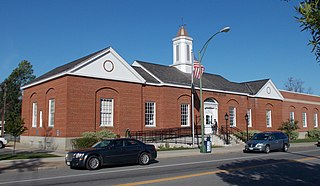 US Post Office-Tonawanda is a historic post office building located at Tonawanda in Erie County, New York, United States. It was designed and built 1939–1940, and is one of a number of post offices in New York State designed by the Office of the Supervising Architect of the Treasury Department under Louis A. Simon. The building is in the Colonial Revival style and features a central pavilion crowned by a cupola and flanked by end pavilions with gable roofs. The interior once featured a mural by Symeon Shimin, but it was removed and has disappeared. An addition to the north was added in 1964. 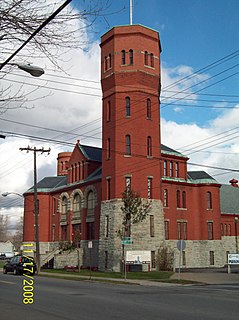 The Tonawanda Armory is a historic armory originally built for the 25th Separate Company of the New York National Guard, and located in the city of Tonawanda in Erie County, New York. It is a brick and stone castle-like structure built in 1897, designed to be reminiscent of medieval military structures in Europe. It was designed by State architect of New York Isaac G. Perry. 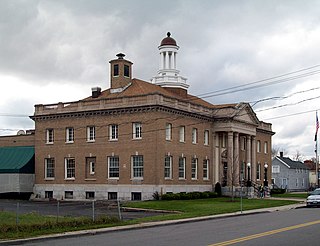 US Post Office—North Tonawanda is a historic post office building located at North Tonawanda in Niagara County, New York. It was designed and built 1912–1914, and is one of a number of post offices in New York State designed by the Office of the Supervising Architect of the Treasury Department, Oscar Wenderoth. The two story building is in the Classical Revival style and features a colossal central portico with two pairs of coupled columns resting on granite pedestals and an elegant domed cupola. 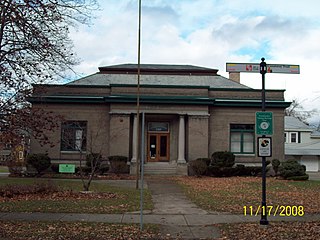 The Carnegie Library in North Tonawanda, New York is a historic Carnegie library building designed and built in 1903 with funds provided by the philanthropist Andrew Carnegie. It is in Niagara County, New York and one of 3,000 Carnegie libraries constructed between 1885 and 1919, including 107 in New York State. 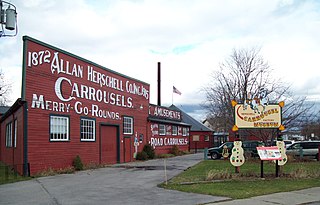 Herschell Carousel Factory Museum is a historic carousel factory building located at North Tonawanda in Niagara County, New York. The factory complex was constructed between about 1910 and 1915 and consists of six primary structures and five contributory additions. The primary structures are: the Mill Building, Carving and Pattern shop, Paint Shop and Storage Building, Roundhouse, Machine Shop (1915), and Assembly and Testing Building (1915). Also on the property is the Number One Special Three Abreast portable carousel, built in 1916. 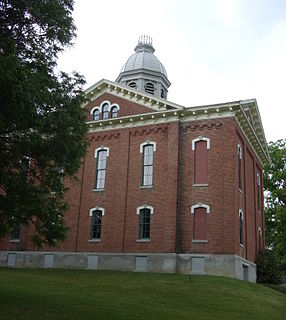 Naples Memorial Town Hall is a historic town hall located at Naples in Ontario County, New York. It was built in 1870–72 and is a lavish and imposing, two story rectangular brick building in the Italianate style. It was designed by A. J. Warner & Company, the Rochester partnership of A. J. Warner and Charles Coots. The town hall served as the center of the village and town's social and recreational activities until World War II. Between 1942 and 1972, the building was in private hands and served a variety of commercial and light industrial uses. In 1972, it was reacquired by the town and serves as a community center and host site for the annual Naples Grape Festival. 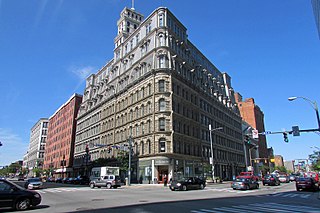 Powers Building is a historic office building located in Rochester in Monroe County, New York. It was built in 1869 and is a nine-story, 165-by-171-foot building, laid out around a large open stairwell in the center. It features a triple mansard roof and observation tower which were added after initial construction, between 1873 and 1888, by Daniel Powers to maintain its standing as the tallest building in Rochester. It was designed by noted Rochester architect Andrew Jackson Warner.