Tonge and Breedon railway station was a station at Tonge that served the adjacent village of Breedon-on-the-Hill, Leicestershire, England. It was on a Midland Railway line built in 1874 from Melbourne to a junction on the Leicester to Burton upon Trent Line near Ashby de la Zouch.

In 1930 passenger services were withdrawn and the Midland's successor, the London, Midland and Scottish Railway, was using the line only for freight services. During the Second World War the line became the Melbourne Military Railway. In 1945 the War Department returned the line and station to the LMS.

In 1980 British Railways closed the line and by the 1990s the track had been dismantled. The trackbed through the former station is now part of National Cycle Route 6.

Breedon on the Hill is a village and civil parish about 5 miles (8 km) north of Ashby-de-la-Zouch in North West Leicestershire, England. The parish adjoins the Derbyshire county boundary and the village is only about 2 miles (3 km) south of the Derbyshire town of Melbourne. The 2001 Census recorded a parish population of 958 people in 404 households. The parish includes the hamlets of Tonge 1 mile (1.6 km) east of the village and Wilson 1.3 miles (2 km) north of the village on the county boundary. The population at the 2011 census was 1,029 in 450 households. 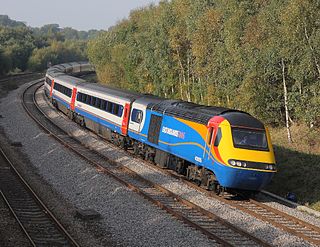 The Midland Main Line is a major railway line in England from London to Nottingham and Sheffield in the north of England. The line is under the Network Rail description of Route 19; it comprises the lines from London's St Pancras station via Leicester, Derby/Nottingham and Chesterfield in the East Midlands.

The Midland Railway (MR) was a railway company in the United Kingdom from 1844. The Midland was one of the largest railway companies in Britain in the early 20th century, and the largest employer in Derby, where it had its headquarters. It amalgamated with several other railways to create the London, Midland and Scottish Railway at grouping in 1922.

The Midland Counties' Railway (MCR) was a railway company in the United Kingdom which existed between 1839 and 1844, connecting Nottingham, Leicester and Derby with Rugby and thence, via the London and Birmingham Railway, to London. The MCR system connected with the North Midland Railway and the Birmingham and Derby Junction Railway in Derby at what become known as the Tri Junct Station. The three later merged to become the Midland Railway.

Melbourne is a market town and civil parish in South Derbyshire, England. It was home to Thomas Cook, and has a street named after him: Thomas Cook Close. It is about 8 miles (13 km) south of Derby and 2 miles (3 km) from the River Trent. The population of the civil parish at the 2011 Census was 4,843.

Bedford St Johns is one of two railway stations in Bedford in Bedfordshire, England, on the Marston Vale Line linking Bletchley and Bedford. It is unstaffed and is operated by London Northwestern Railway.

Bedford railway station is the larger of two railway stations in the town of Bedford in Bedfordshire, England. It is on the Midland main line from London St Pancras to the East Midlands and the terminus of the Marston Vale line from Bletchley through Bedford St Johns. 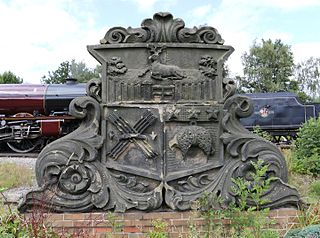 The North Midland Railway was a British railway company, which opened its line from Derby to Rotherham (Masbrough) and Leeds in 1840. 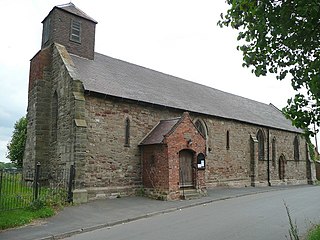 Worthington is a village and civil parish in North West Leicestershire, England, about 4 miles (6.4 km) north of the town of Coalville and a similar distance north-east of the market town of Ashby-de-la-Zouch. The population of the civil parish at the 2011 census was 1,461. The village is about 5 miles (8 km) from East Midlands Airport and junction 23a of the M1 motorway where it meets the A42 road. The parish also includes the hamlet of Newbold.

The Melbourne Line was a railway line which ran from Derby to Ashby de la Zouch. It was used by the British Army and Allied engineers during the Second World War from 1939 until late 1944 to prepare them for the invasion of mainland Europe. Engineers practised the demolition and rebuilding of railways and the running and maintenance of a railway line and its rolling stock. There was also a bridge building school at Kings Newton.

Nottingham Carrington Street railway station was the first railway station in Nottingham, opened in 1839 by the Midland Counties Railway. Initially there were two lines with a central platform as well as side ones according to Billson. Victorian civil engineer Francis Whishaw described the station as:

"The elevation next to the road to Nottingham is of plain but neat design. It consists of a central portion and two wings; the central portion contains the entrance hall, which is of the whole height of the building. In the right wing is the booking office for first and second class passengers, with windows at which the passengers receive their tickets; the third class passengers obtain their tickets at a counter fixed in the hall. In the left-wing is the boardroom and clerks offices; and in a building projecting towards the passenger shed in the rear is a waiting room for ladies. The [train] shed is covered with a light iron roof in two spans, which is supported on the departure side by a brick wall, in which there are eight windows; and on the arrival side, and along the middle line, by two rows of cast iron columns, nine in each row."

Lakeside railway station is a railway station on the heritage Lakeside and Haverthwaite Railway. It was previously the terminus of the Furness Railway Ulverston to Lakeside Line, which was closed as part of the Beeching Axe in 1965. It serves the village of Lakeside in Cumbria, as well as the tourist attractions located there.

Melbourne railway station was a station at Kings Newton that served the adjacent town of Melbourne, Derbyshire, England. It was opened in 1868 as the terminus of a Midland Railway branch from Derby Midland. In 1874 it became a through station as the line was extended to a junction on the Leicester to Burton upon Trent Line near Ashby-de-la-Zouch.

Chellaston and Swarkestone railway station was a station at Chellaston in Derbyshire, England. It was opened in 1868 as part of the Midland Railway branch from Derby Midland to Melbourne.

Worthington railway station was a station at Worthington, Leicestershire, England. It was on a Midland Railway line built in 1874 from Melbourne to a junction on the Leicester to Burton upon Trent Line near Ashby de la Zouch.

The Evesham branch line is a mostly disused English railway line running from Barnt Green via Redditch, Alcester and Evesham to Ashchurch. It was sometimes known as the Gloucester loop line of the Midland Railway.