Last updated September 18, 2019
Not to be confused with Federal cities of Russia.

City of federal subject significance is an administrative division of a federal subject of Russia which is equal in status to a district but is organized around a large city; occasionally with surrounding rural territories.[ citation needed ]

Russia, or the Russian Federation, is a transcontinental country in Eastern Europe and North Asia. At 17,125,200 square kilometres (6,612,100 sq mi), Russia is, by a considerable margin, the largest country in the world by area, covering more than one-eighth of the Earth's inhabited land area, and the ninth most populous, with about 146.79 million people as of 2019, including Crimea. About 77% of the population live in the western, European part of the country. Russia's capital, Moscow, is one of the largest cities in the world and the second largest city in Europe; other major cities include Saint Petersburg, Novosibirsk, Yekaterinburg and Nizhny Novgorod. Extending across the entirety of Northern Asia and much of Eastern Europe, Russia spans eleven time zones and incorporates a wide range of environments and landforms. From northwest to southeast, Russia shares land borders with Norway, Finland, Estonia, Latvia, Lithuania and Poland, Belarus, Ukraine, Georgia, Azerbaijan, Kazakhstan, China, Mongolia and North Korea. It shares maritime borders with Japan by the Sea of Okhotsk and the U.S. state of Alaska across the Bering Strait. However, Russia recognises two more countries that border it, Abkhazia and South Ossetia, both of which are internationally recognized as parts of Georgia. 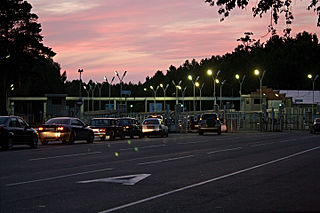 A closed city or closed town is a settlement where travel or residency restrictions are applied so that specific authorization is required to visit or remain overnight. They may be sensitive military establishments or secret research installations that require much more space or freedom than is available in a conventional military base. There may also be a wider variety of permanent residents including close family members of workers or trusted traders who are not directly connected with its clandestine purposes.

As of 2013, the following types of such entities are recognized:

A federal district is a type of administrative division of a federation, usually under the direct control of a federal government and organized sometimes with a single municipal body. Federal districts often include capital districts, and they exist in various countries worldwide.

An oblast is a type of federal subject of the Russian Federation.

A krai is a type of federal subject of Russia. The country is divided into 85 federal subjects, of which nine are krais. Oblasts, another type of federal subject, are legally identical to krais and the difference between a political entity with the name "krai" or "oblast" is purely traditional, similar to the commonwealths in the United States; both are constituent entities equivalent in legal status in Russia with representation in the Federation Council. During the Soviet era, the autonomous oblasts could be subordinated to republics or krais, but not to oblasts.

Ukraine is divided into several levels of territorial entities. On the first level there are 27 regions: 24 oblasts, one autonomous republic, and two "cities with special status". Following the 2014 Crimean crisis, Crimea and Sevastopol became de facto administrated by the Russian Federation, which claims them as the Republic of Crimea and the federal city of Sevastopol. The international community recognises them as being Ukrainian territory.

Yalta City Municipality, officially "the territory governed by the Yalta city council", also known as Greater Yalta is one of the 25 regions of the Autonomous Republic of Crimea, a territory recognized by a majority of countries as part of Ukraine and incorporated by Russia as the Republic of Crimea.

Gryazovetsky District is an administrative and municipal district (raion), one of the twenty-six in Vologda Oblast, Russia. It is located in the south of the oblast and borders with Mezhdurechensky District in the north, Soligalichsky and Buysky Districts of Kostroma Oblast in the east, Lyubimsky and Pervomaysky Districts of Yaroslavl Oblast in the south, Poshekhonsky District, also of Yaroslavl Oblast, in the southeast, and with Vologodsky District in the northwest. The area of the district is 5,030 square kilometers (1,940 sq mi). Its administrative center is the town of Gryazovets. Population: 36,820 (2010 Census); 41,644 ; 47,136 (1989 Census). The population of Gryazovets accounts for 42.2% of the district's total population.

The municipal divisions in Russia, called the municipal formations, are territorial divisions of the Russian Federation within which the state governance is augmented with local self-government independent of the state organs of governance within the law, to manage local affairs.