The Dominion of Fiji was the official name of Fiji between October 1970 and 6 October 1987. When British rule ended in 1970, the Colony of Fiji was given independence as a Dominion, in which the British monarch, Elizabeth II, remained head of state as Queen of Fiji, represented by the Governor-General. The Republic of Fiji, removing Queen Elizabeth II as head of state, was proclaimed on 6 October 1987 after two military coups.

Until 1987, Fiji's highest court was the Judicial Committee of the Privy Council, which was above the Supreme Court of Fiji in the Fijian judicial system.

After the Second World War, Fiji began to take its first steps towards internal self-government. The Legislative Council was expanded to 32 members in 1953, 15 of them elected and divided equally among the three major ethnic constituencies (indigenous Fijians, Indo-Fijians, and Europeans). Ratu Sukuna was chosen as the first Speaker. Although the Legislative Council still had few of the powers of the modern Parliament, it brought native Fijians and Indo-Fijians into the official political structure for the first time, and fostered the beginning of a modern political culture in Fiji.

These steps towards self-rule were welcomed by the Indo-Fijian community, which by that time had come to outnumber the native Fijian population. Fearing Indo-Fijian domination, many Fijian chiefs saw the benevolent rule of the British as preferable to Indo-Fijian control and resisted British moves towards autonomy. By this time, however, the United Kingdom had apparently decided to divest itself of its colonial empire and pressed ahead with reforms. The Fijian people as a whole were enfranchised for the first time in 1963, when the legislature was made a wholly elective body, except for 2 members out of 36 nominated by the Great Council of Chiefs. 1964 saw the first step towards responsible government, with the introduction of the Member system. Specific portfolios were given to certain elected members of the Legislative Council. They did not constitute a Cabinet in the Westminster sense of the term, as they were officially advisers to the colonial Governor rather than ministers with executive authority, and were responsible only to the Governor, not to the legislature. Nevertheless, over the ensuing three years, the then Governor, Sir Derek Jakeway, treated the Members more and more like ministers, to prepare them for the advent of responsible government.

A constitutional conference was held in London in July 1965, to discuss constitutional changes with a view to introducing responsible government. Indo-Fijians, led by A. D. Patel, demanded the immediate introduction of full self-government, with a fully elected legislature, to be elected by universal suffrage on a common voters' roll. These demands were vigorously rejected by the ethnic Fijian delegation, who still feared loss of control over natively owned land and resources should an Indo-Fijian dominated government come to power. The British made it clear, however, that they were determined to bring Fiji to self-government and eventual independence. Realizing that they had no choice, Fiji's chiefs decided to negotiate for the best deal they could get.

A series of compromises led to the establishment of a cabinet system of government in 1967, with Ratu Kamisese Mara as the first Chief Minister. Ongoing negotiations between Mara and Sidiq Koya, who had taken over the leadership of the mainly Indo-Fijian National Federation Party on Patel's death in 1969, led to a second constitutional conference in London, in April 1970, at which Fiji's Legislative Council agreed on a compromise electoral formula and a timetable for independence as a fully sovereign and independent nation with the Commonwealth. The Legislative Council would be replaced with a bicameral Parliament, with a Senate dominated by Fijian chiefs and a popularly elected House of Representatives. In the 52-member House, Native Fijians and Indo-Fijians would each be allocated 22 seats, of which 12 would represent Communal constituencies comprising voters registered on strictly ethnic roles, and another 10 representing National constituencies to which members were allocated by ethnicity but elected by universal suffrage. A further 8 seats were reserved for "General electors" - Europeans, Chinese, Banaban Islanders, and other minorities; 3 of these were "communal" and 5 "national". With this compromise, Fiji became independent on 10 October 1970.

The following held office as prime minister (and head of government):

Following the election of the ethnically Indian-dominated government of Prime Minister Timoci Bavadra (although he personally was an indigenous Fijian) on 13 April 1987, Lieutenant Colonel Sitiveni Rabuka carried out the first of two military coups on 14 May 1987. At first, Rabuka expressed loyalty to Queen Elizabeth II. However, Governor-General Ratu Sir Penaia Ganilau, in an effort to uphold Fiji's constitution, refused to swear in the new (self-appointed) government headed by Rabuka, and so Rabuka declared a republic on 6 October 1987. This was accepted by the British government on 15 October 1987, and Ganilau resigned on the same day. In a letter addressed to Queen Elizabeth II, Ganilau wrote:

"With humble duty, I wish to submit to you the following advice, acting in my capacity as your representative in Fiji. Owing to the uncertainty of the political and constitutional situation in Fiji, I have now made up my mind to request Your Majesty to relieve me of my appointment as Governor-General with immediate effect. This I do with utmost regret, but my endeavours to preserve constitutional government in Fiji have proved in vain, and I can see no alternative way forward. With deepest respect, Penaia Ganilau, Governor-General."

Following the establishment of the Republic of Fiji, former Governor-General Ratu Sir Penaia Ganilau became the first President of Fiji, in December 1987.

Timoci Uluivuda Bavadra was a Fijian medical doctor who founded the Fiji Labour Party and served as the Prime Minister of Fiji for one month in 1987. 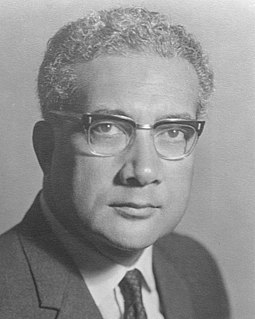 Ratu Sir Kamisese Mara, CF, GCMG, KBE was a Fijian politician, who served as Chief Minister from 1967 to 1970, when Fiji gained its independence from the United Kingdom, and, apart from one brief interruption in 1987, the first Prime Minister from 1970 to 1992. He subsequently served as President from 1993 to 2000. He is considered the founding father of the modern nation of Fiji.

The Alliance Party, was the ruling political party in Fiji from 1966 to 1987. Founded in the early 1960s, its leader was Kamisese Mara, the founding father of the modern Fijian nation. Widely seen as the political vehicle of the traditional Fijian chiefs, the Alliance Party also commanded considerable support among the Europeans and other ethnic minorities, who, although comprising only 3–4% of Fiji's population, were over represented in the parliament. Indo-Fijians were less supportive, but the Fijian-European block vote kept the Alliance Party in power for more than twenty years. 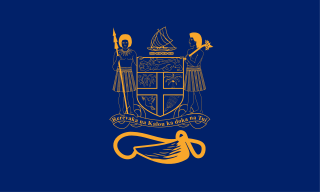 The president of the Republic of Fiji is the head of state of Fiji. The president is appointed by the Parliament of Fiji for a three-year term under the terms of the 2013 Constitution of Fiji. Although not entirely a figurehead, the president's role in government is mostly ceremonial, but there are important reserve powers that may be exercised in the event of a crisis. In addition, the president is the commander-in-chief of the military forces.

The Great Council of Chiefs(Bose Levu Vakaturaga in Fijian, ग्रेट काउंसिल ऑफ चीफ्स in Fiji Hindi) was a constitutional body in Fiji from 1876 to March 2012. In April 2007, the council was suspended, due to an unworkable relationship with Frank Bainimarama, leader of an "interim government" that came to power through military coup in December 2006. It was formally disestablished by decree in March 2012.

Siddiq Moidin Koya (1924–1993) was a Fijian Indian politician, Statesman and Opposition leader. He succeeded to the leadership of the mostly Indo-Fijian National Federation Party (NFP) on the death of the party's founder, A. D. Patel, in October 1969, remaining in this post until 1977. He later served a second term as leader of the NFP, from 1984 to 1987.

Ratu Sir Penaia Kanatabatu Ganilau was the first President of Fiji, serving from 8 December 1987 until his death in 1993. He had previously served as Governor-General of Fiji, representing Elizabeth II, Queen of Fiji, from 12 February 1983 to 15 October 1987. 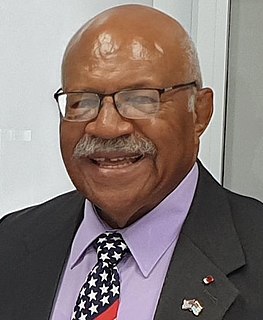 Sitiveni Ligamamada Rabuka, OBE, MSD, OStJ, is a Fijian politician best known as the instigator of two military coups in 1987. He was later democratically elected as Prime Minister of Fiji, serving from 1992 to 1999. He went on to serve as Chairman of the Great Council of Chiefs, and later served as Chairman of the Cakaudrove Provincial Council from 2001 to 2008. He was elected to this position on 24 May 2001 and re-elected for another three-year term on 13 April 2005.

The Fijian coups d'état of 1987 resulted in the overthrow of the elected government of Fijian Prime Minister Timoci Bavadra, the deposition of Elizabeth II as Queen of Fiji, and in the declaration of a republic. The first coup d'état, in which Bavadra was deposed, took place on 14 May 1987; a second coup d'état on 28 September ended the monarchy, and was shortly followed by the proclamation of a republic on 7 October. Both military actions were led by Lieutenant Colonel Sitiveni Rabuka, then third in command of the Royal Fiji Military Forces. Depending on perspective, one may view the event either as two successive coups d'état separated by a four-month intermission, or as a single coup begun on 14 May and completed with the declaration of the republic.

The National Federation Party is a Fijian political party founded by A.D. Patel in November 1968, as a merger of the Federation Party and the National Democratic Party. Though it claimed to represent all Fiji Islanders, it was supported, in practice, almost exclusively by Indo-Fijians whose ancestors had come to Fiji, mostly as indentured labourers, between 1879 and 1916. However, in the 2018 General elections the party recorded a considerable change in its support base as a consequent of the inclusion of more indigenous Fijian candidates.

Fiji's parliamentary election of March 1977 precipitated a constitutional crisis, which was the first major challenge to the country's democratic institutions since independence in 1970.

The Fijian Association Party (FAP) is a former political party in Fiji. It played a significant role in Fijian politics throughout the 1990s, but lost all of its seats in the House of Representatives in the parliamentary election of 2001.

Since attaining independence from the United Kingdom on 10 October 1970, Fijian history has been marked by exponential economic growth up to 1987, followed by relative stagnation, caused to a large extent by political instability following two military coups in 1987 and a civilian putsch in 2000. This was followed by another military coup in 2006. Rivalry between indigenous Fijians and Indo-Fijians, rather than ideological differences, have been the most visible cleavage of Fijian politics. Later in 2020, Fiji was hit by a coronavirus pandemic originated from Wuhan, China affecting the economy and the daily lives of the people.

The monarchy of Fiji arose in the nineteenth century, when native ruler Seru Epenisa Cakobau consolidated control of the Fijian Islands and declared himself King or paramount chief of Fiji. In 1874, he voluntarily ceded sovereignty of the islands to Britain, which made Fiji a Crown colony within the British Empire.

Sir John Neil Falvey, K.B.E., Q.C. was a New Zealand-born lawyer, who served as Attorney General of Fiji from 1970 to 1977. Previously, he had served as legal adviser to the Fijian Affairs Board.