In plane geometry, the einstein problem asks about the existence of a single prototile that by itself forms an aperiodic set of prototiles, that is, a shape that can tessellate space, but only in a nonperiodic way. Such a shape is called an "einstein" (not to be confused with the physicist Albert Einstein), a play on the German words ein Stein, meaning one tile. Depending on the particular definitions of nonperiodicity and the specifications of what sets may qualify as tiles and what types of matching rules are permitted, the problem is either open or solved. The einstein problem can be seen as a natural extension of the second part of Hilbert's eighteenth problem, which asks for a single polyhedron that tiles Euclidean 3-space, but such that no tessellation by this polyhedron is isohedral. [1] Such anisohedral tiles were found by Karl Reinhardt in 1928, but these anisohedral tiles all tile space periodically.

In 1988, Peter Schmitt discovered a single aperiodic prototile in 3-dimensional Euclidean space. While no tiling by this prototile admits a translation as a symmetry, some have a screw symmetry. The screw operation involves a combination of a translation and a rotation through an irrational multiple of π, so no number of repeated operations ever yield a pure translation. This construction was subsequently extended by John Horton Conway and Ludwig Danzer to a convex aperiodic prototile, the Schmitt-Conway-Danzer tile. The presence of the screw symmetry resulted in a reevaluation of the requirements for non-periodicity. [2] Chaim Goodman-Strauss suggested that a tiling be considered strongly aperiodic if it admits no infinite cyclic group of Euclidean motions as symmetries, and that only tile sets which enforce strong aperiodicity be called strongly aperiodic, while other sets are to be called weakly aperiodic. [3]

In 1996, Petra Gummelt constructed a decorated decagonal tile and showed that when two kinds of overlaps between pairs of tiles are allowed, the tiles can cover the plane, but only non-periodically. [4] A tiling is usually understood to be a covering with no overlaps, and so the Gummelt tile is not considered an aperiodic prototile. An aperiodic tile set in the Euclidean plane that consists of just one tile–the Socolar–Taylor tile–was proposed in early 2010 by Joshua Socolar and Joan Taylor. [5] This construction requires matching rules, rules that restrict the relative orientation of two tiles and that make reference to decorations drawn on the tiles, and these rules apply to pairs of nonadjacent tiles. Alternatively, an undecorated tile with no matching rules may be constructed, but the tile is not connected. The construction can be extended to a three-dimensional, connected tile with no matching rules, but this tile allows tilings that are periodic in one direction, and so it is only weakly aperiodic. Moreover, the tile is not simply connected.

The existence of a strongly aperiodic tile set for the Euclidean plane consisting of one connected tile without matching rules is an unsolved problem. 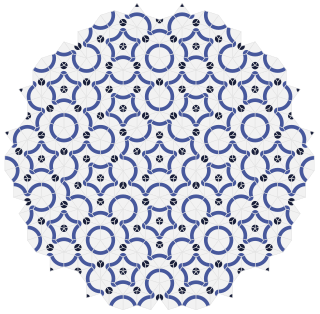 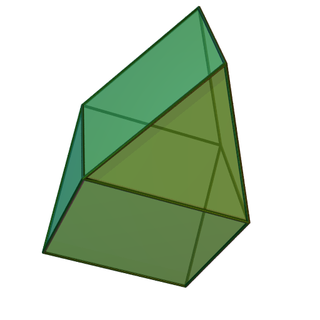 Hilbert's eighteenth problem is one of the 23 Hilbert problems set out in a celebrated list compiled in 1900 by mathematician David Hilbert. It asks three separate questions about lattices and sphere packing in Euclidean space. 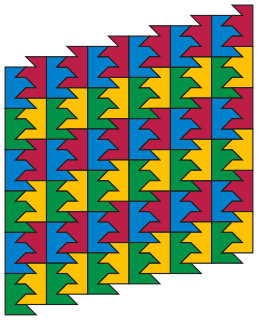 In geometry, a shape is said to be anisohedral if it admits a tiling, but no such tiling is isohedral (tile-transitive); that is, in any tiling by that shape there are two tiles that are not equivalent under any symmetry of the tiling. A tiling by an anisohedral tile is referred to as an anisohedral tiling. 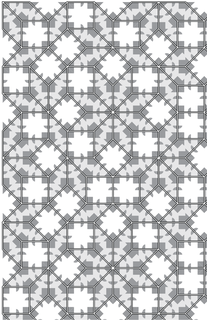 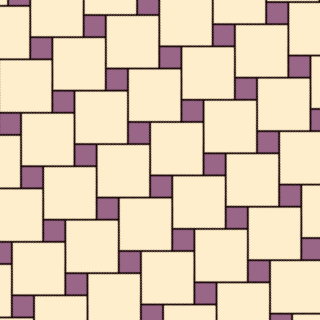 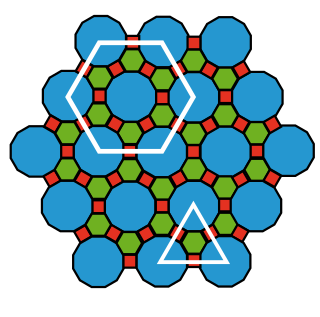 Chaim Goodman-Strauss is an American mathematician who works in convex geometry, especially aperiodic tiling. He is on the faculty of the University of Arkansas and is a co-author with John H. Conway of The Symmetries of Things, a comprehensive book surveying the mathematical theory of patterns.

In geometry, a chair tiling is a nonperiodic substitution tiling created from L-tromino prototiles. These prototiles are examples of rep-tiles and so an iterative process of decomposing the L tiles into smaller copies and then rescaling them to their original size can be used to cover patches of the plane. Chair tilings do not possess translational symmetry, i.e., they are examples of nonperiodic tilings, but the chair tiles are not aperiodic tiles since they are not forced to tile nonperiodically by themselves. The trilobite and cross tiles are aperiodic tiles that enforce the chair tiling substitution structure and these tiles have been modified to a simple aperiodic set of tiles using matching rules enforcing the same structure. Barge et al. have computed the Čech cohomology of the chair tiling and it has been shown that chair tilings can also be obtained via a cut-and-project scheme.