Last updated April 02, 2019
‹ The template Infobox settlement is being considered for merging. ›
District in Heilongjiang, People's Republic of China

Fularji (simplified Chinese :富拉尔基区; traditional Chinese :富拉爾基區; pinyin :Fùlā'ěrjī Qū) is a district of the province of Heilongjiang, People's Republic of China. It is under the jurisdiction of the prefecture-level city of Qiqihar.

Lahu is a Tibeto-Burman language spoken by the Lahu people of China, Thailand, Myanmar, and Laos. It is widely used in China, both by Lahu people, and by other ethnic minorities in Yunnan, who use it as a lingua franca. However, the language is not widely used nor taught in any schools in Thailand, where many Lahu are in fact refugees and illegal immigrants, having crossed into Thailand from Myanmar.

Lancang Lahu Autonomous County is an autonomous county under the jurisdiction of Pu'er City, in southwestern Yunnan province, China. Lancang is the same as Lan Xang, and refers to the Mekong River on its eastern borders and adopted by modern Laos, a Tai word meaning Million Elephants. 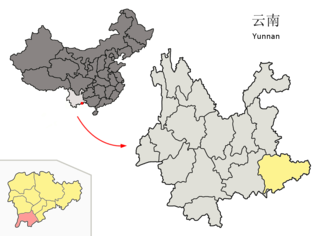 The Chinese people in Pakistan comprise one of the country's significant expatriate communities. The China-Pakistan Economic Corridor has raised the expatriate population, which has grown from 20,000 in 2013 to 60,000 in 2018. 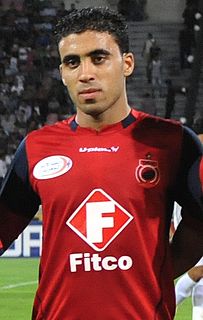 Abderrazak "Abdo" Hamdallah is a Moroccan footballer who plays as a striker for Al-Nassr in the Saudi Professional League. He has also been capped for Morocco. He got his first cap in 2012.

Chang Feiya is a Chinese football player who currently plays for Chinese Super League side Wuhan Zall on loan from Guangzhou R&F.

The 2015 Ping An Chinese Football Association Super League was the 12th season since the establishment of the Chinese Super League, the 22nd season of a professional Association football league and the 54th top-tier league season in China. The league title sponsor was Ping An Insurance. Guangzhou Evergrande Taobao won their fifth consecutive title of the league.

The 2018 Ping An Chinese Football Association Super League was the 15th season since the establishment of the Chinese Super League. The league title sponsor was Ping An Insurance. Shanghai SIPG won their first top-tier league titles on 7 November 2018 after the 2–1 victory against Beijing Renhe, ending a historic run for Guangzhou Evergrande Taobao, who had won seven consecutive titles beginning with the 2011 season. 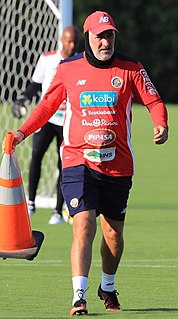 Wang Peng is a Chinese footballer who currently plays for Guangzhou R&F in the Chinese Super League. He is the son of Chinese former international Wang Huiliang.