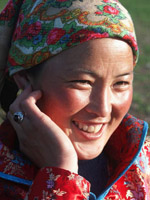 The Daur people are a Mongolic-speaking ethnic group in northeastern China. The Daurian form one of the 56 ethnic groups officially recognised in the People's Republic of China. They numbered 131,992 according to the latest census (2010), and most of them live in Morin Dawa Daur Autonomous Banner in Hulun Buir, Inner Mongolia and Meilisi Daur District in Qiqihar, Heilongjiang of China. There are also some near Tacheng in Xinjiang, where their ancestors were moved during the Qing Dynasty.

Guichi District is a district of the city of Chizhou, Anhui province, People's Republic of China and the seat of the city government. The district has a population of 630,000 and an area of 2,432 km2 (939 sq mi).

Gold Typhoon Group is a Chinese entertainment company. Gold Label was founded in 2003 in Hong Kong, launched with the support of EMI, and acquired EMI Music Taiwan / EMI Music China in 2008, reforming to Gold Typhoon. On 1 January 2011, it became a wholly owned subsidiary of Pacific Global Management Asia (PGMA) under the leadership of Chairman Louis Pong.

Fuyu is a county of western Heilongjiang province, People's Republic of China, under the administration of Qiqihar City, the downtown of which is 65 kilometres (40 mi) to the southwest. Various economic crops and the milk are produced in the fertile land. The county has an area of 4,335 square kilometres (1,674 sq mi), and a population of 300,000 inhabitants.

Zhenyuan Yi, Hani and Lahu Autonomous County is an autonomous county under the jurisdiction of Pu'er City, in the west central part of Yunnan Province, China. 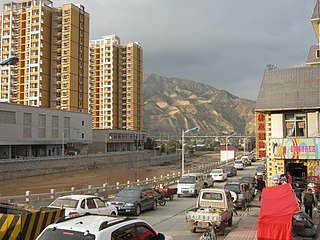 Minhe Hui and Tu Autonomous County is the easternmost county in Qinghai Province, China. It is under the administration of Haidong Region. "Hui" refers to the Chinese Muslims, whereas "Tu" refers to the ethnic group known as “Monguor” in the West and as "Tu Zu" in China. It borders the Honggu District of Gansu on the east, demarcated by the Datong River, a tributary to the Huangshui River, which eventually flows into the Yellow River. 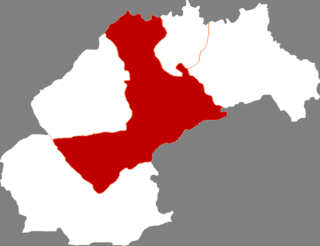 Morin Dawa Daur Autonomous Banner is one of three autonomous banners in Inner Mongolia, People's Republic of China, created for the Daur people. It lies on the Nen River, borders Heilongjiang province to the east, south, and southwest, and is under the administration of Hulunbuir City.

Sanjiazi (Chinese: 三家子; pinyin: Sānjiāzi; is a village or Ilanbotokso in Youyi Daur, Manchu, and Kirghiz Ethnic Township, Fuyu County, Heilongjiang, China. The village is about 22 km southwest of the administrative center of Fuyu, and about 6 km west of the main road from Qiqihar.

The 58.com 2018 Chinese Football Association China League was the 15th season of the China League One, the second tier of the Chinese football league pyramid, since its establishment in 2004. The league's title sponsor is the e-commerce website 58.com. Dalian Transcendence, Heilongjiang Lava Spring, Meizhou Hakka, Meizhou Meixian Techand and Nei Mongol Zhongyou failed to submit the application for the Chinese Super League before deadline, thus ineligible for promotion.

Xiqi is an unclassified Loloish language of Huaning County, Yunnan, China. It is also called Siqipo 斯期颇 in Mile County.

Guozuo is a Southern Loloish language of Yunnan, China. It is spoken in Jinping Miao, Yao, and Dai Autonomous County and Lüchun County, Yunnan.