Gate deities of the underworld

The Gate deities of the underworld were ancient Egyptian minor deities charged with guarding the gates of the Egyptian underworld. [2] [3] [4]

The Egyptians believed that in the netherworld, the Duat, there were various gates, doors and pylons crossed every night by the solar boat (Atet) of the sun-god Ra and by the souls directed to the world of the dead. [4]

Ancient funerary texts provide many different descriptions of the afterlife gates. Sometimes more than 1,000 guardian deities are listed. [3] According to a more general view, every gate was guarded by a minor god who allowed access only to the souls capable of pronouncing the secret name of the god himself, as a sort of "password". [3] The walls of many Pharaonic tombs in the Valley of the Kings are decorated with the texts of the Book of Gates, which describes the twelve gates or pylons of the underworld: in spite of being imagined as architectural barriers to all intents and purposes, the gates were individually named as goddesses. [4] Chapter 144 of the Book of the Dead mentions seven gates, each with its own God, a Doorkeeper and a Herald: for example, the 7th gate is guarded by the god "Sharpest Of Them All", by the doorkeeper "Strident Of Voice" and by the herald "Rejector Of Rebels". [3]

Other funerary texts mention 21 "Secret Portals Of The Mansion Of Osiris In The Field Of Reeds" with their own names and epithets and protected by zoo-anthropomorfic deities often depicted crouched on the ground and holding large, threatening knives. [3] The names of these last accesses — still feminine — are from time to time disturbing as the 14th ("Mistress Of Anger – Dancing On Blood") or harmless as the 3rd ("Mistress Of The Altar"). The guardian-gods too were given names that inspired terror and, above all, evoked their fearful powers: for example "Swallower Of Sinners" and "Existing On Maggots" — even if some texts avoided directly to indicate their names, adding these largely unnamed gate deities of underworld to the group of Egyptian divinities known to scholars, but impossible to inventory. [3]

According to the descriptions provided by the wall paintings in regal tombs of the Valley of the Kings, each gate or pylon consisted of three elements: a) a spitfire snake placed in front of the access, b) the gate itself, described both as a true architectural portal and as a goddess, c) and its guardian deities. The solar boats' travel through such gates can be described as follows. [2]

1st gate: Sia, deification of perception, [5] standing on the prow of the sun boat, invites a snake called "Desert-Protector" to unlock the gate to the arrival of Ra who, in the form of the god Atum (deification of the sunset sun [6] ), observes his enemies being massacred.

2nd gate: the guardian god is called "Swallower Of Sinners" and his gate precedes a lake of fire.

3rd gate: its guardian snake is "Stinger" while the portal itself is the goddess "Mistress Of Food"; some jackals watch over the "Lake of Life" interdicted to the dead because it is the place where Ra draws his breath.

4th gate: some deities carry ropes to measure the extension of the netherworld fields — as well as, in the daily life of the Egyptians, the measurement of the fields was carried out for tax purposes; this is also where the four human ethnic groups (according to the Egyptians) were depicted: the "cattle of Ra", i.e. Egyptians themselves, Levantines, Libyans and Nubians.

5th gate: this gate is the goddess "Lady Of Duration" while its guardian serpent is "Flame-Eyed"; this access is inhabited by the perfidious demon Apep — embodiment of evil and chaos (Isfet), bitter enemy of Ra [7] — here called "Evil Of Face". 20 deities manage to stem his devastating power by continuing to dissect it, while the heads of those he devoured emerge from his coils. The sun boat moves on and Ra leaves this dramatic region.

6th gate: Ra's boat approaches to seven jackal-headed poles with two enemies bound to each one, waiting to be beheaded.

7th gate: this gate is the goddess "Shining One" and beyond it there are 20 gods holding a rope ending in four whips, four falcon heads and four human heads. This is an enigmatic and barely understandable point.

8th gate: this access is inhabited by a flaming snake who burns up the enemies of Osiris.

10th gate: Apep appears again, but chained in order not to harm Ra in his transit.

11th gate: this gate is called "Mysterious Of Approaches" and is overseen by the cat-headed god Meeyuty ( meow onomatopoeia).

12th gate: here stand the goddesses Isis and Nephthys in the form of snakes: the journey through the gates of the afterlife is finished and the sun rises on the world in the form of a sacred scarab (Khepri, deification of the morning sun [8] ).

The British egyptologist George Hart thus outlined, in his Dictionary of Egyptian Gods and Goddesses (1986), the evocative names of these deities and their positions in the netherworld as described in the funeral papyri known to scholars: [9]

Gods of the Seven Gates

A solar deity is a sky deity who represents the Sun, or an aspect of it, usually by its perceived power and strength. Solar deities and Sun worship can be found throughout most of recorded history in various forms. The Sun is sometimes referred to by its Latin name Sol or by its Greek name Helios. The English word sun stems from Proto-Germanic *sunnǭ.

Khepri is a scarab-faced god in ancient Egyptian religion who represents the rising or morning sun. By extension, he can also represent creation and the renewal of life.

Atum, sometimes rendered as Atem or Tem, is an important deity in Egyptian mythology.

Seker is a falcon god of the Memphite necropolis.

Montu was a falcon-god of war in ancient Egyptian religion, an embodiment of the conquering vitality of the pharaoh. He was particularly worshipped in Upper Egypt and in the district of Thebes, despite being a Delta-native, astral deity.

[Ramesses II] whom victory was foretold as he came from the womb,
Whom valor was given while in the egg,
Bull firm of heart as he treads the arena,
Godly king going forth like Montu on victory day. 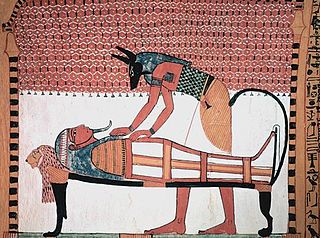 In early Egyptian mythology, Mafdet was a goddess who protected against snakes and scorpions and was often represented as either some sort of felid or mongoose. She is present in the Egyptian pantheon as early as the First Dynasty. Mafdet was the deification of legal justice, or possibly of capital punishment. She was also associated with the protection of the king's chambers and other sacred places, and with protection against venomous animals, which were seen as transgressors against Maat.

Sia or Saa, an ancient Egyptian god, was the deification of perception in the Heliopolitan Ennead cosmogony and is probably equivalent to the intellectual energies of the heart of Ptah in the Memphite cosmogeny. He also had a connection with writing and was often shown in anthropomorphic form holding a papyrus scroll. This papyrus was thought to embody intellectual achievements. 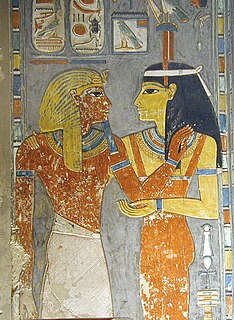 Imentet was a goddess in Ancient Egyptian religion representing the necropolises west of the Nile. 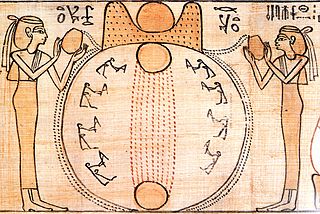 Geb was the Egyptian god of the Earth and later a member of the Ennead of Heliopolis. He had a viper around his head and was thus also considered the father of snakes. It was believed in ancient Egypt that Geb's laughter created earthquakes and that he allowed crops to grow.

Ancient Egyptian afterlife beliefs were centered around a variety of complex rituals, that were influenced by many aspects of Egyptian culture. Religion was a major contributor, since it was an important social practice that bound all Egyptians together. For instance, many of the Egyptian gods played roles in guiding the souls of the dead through the afterlife. With the evolution of writing, religious ideals were recorded and quickly spread throughout the Egyptian community. The solidification and commencement of these doctrines were formed in the creation of afterlife texts which illustrated and explained what the dead would need to know in order to complete the journey safely.

The Cavern deities of the underworld were ancient Egyptian minor deities charged with punishing the damned souls by beheading and devouring them.