Sopdu (also rendered Septu or Sopedu) was a god of the sky and of eastern border regions in the religion of Ancient Egypt. [1] He was Khensit's husband.

As a sky god, Sopdu was connected with the god Sah, the personification of the constellation Orion, and the goddess Sopdet, representing the star Sirius. According to the Pyramid Texts, Horus-Sopdu, a combination of Sopdu and the greater sky god Horus, is the offspring of Osiris-Sah and Isis-Sopdet. [1]

As a god of the east, Sopdu was said to protect Egyptian outposts along the frontiers and to help the pharaoh control those regions' foreign inhabitants. He was referred to as Lord of the East, and had his greatest cult centre at the easternmost nome of Lower Egypt, which was named Per-Sopdu, meaning place of Sopdu. He also had shrines at Egyptian settlements in the Sinai Peninsula, such as the turquoise mines at Serabit el-Khadim. [1]

Sopdu's name is composed of the hieroglyph for sharp, a pointed triangle, and the 3rd person plural suffix (a quail); thus a literal translation of his name is sharp ones. [2] He was said, in the Pyramid Texts, to protect the teeth of the deceased pharaoh. [1]

Sopdu was depicted as a falcon sitting on a religious standard, often with a two-feathered crown on his head and a flail over his shoulder. In his border-guarding role he was shown as a Near Eastern warrior, with a shemset girdle and an axe or spear. [1] 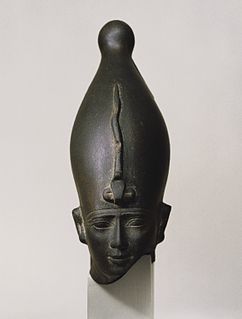 Isis was a major goddess in ancient Egyptian religion whose worship spread throughout the Greco-Roman world. Isis was first mentioned in the Old Kingdom as one of the main characters of the Osiris myth, in which she resurrects her slain husband, the divine king Osiris, and produces and protects his heir, Horus. She was believed to help the dead enter the afterlife as she had helped Osiris, and she was considered the divine mother of the pharaoh, who was likened to Horus. Her maternal aid was invoked in healing spells to benefit ordinary people. Originally, she played a limited role in royal rituals and temple rites, although she was more prominent in funerary practices and magical texts. She was usually portrayed in art as a human woman wearing a throne-like hieroglyph on her head. During the New Kingdom, as she took on traits that originally belonged to Hathor, the preeminent goddess of earlier times, Isis was portrayed wearing Hathor's headdress: a sun disk between the horns of a cow.

Horus or Her, Heru, Hor, Har in Ancient Egyptian, is one of the most significant ancient Egyptian deities who served many functions, most notably god of kingship and the sky. He was worshipped from at least the late prehistoric Egypt until the Ptolemaic Kingdom and Roman Egypt. Different forms of Horus are recorded in history and these are treated as distinct gods by Egyptologists. These various forms may possibly be different manifestations of the same multi-layered deity in which certain attributes or syncretic relationships are emphasized, not necessarily in opposition but complementary to one another, consistent with how the Ancient Egyptians viewed the multiple facets of reality. He was most often depicted as a falcon, most likely a lanner falcon or peregrine falcon, or as a man with a falcon head. 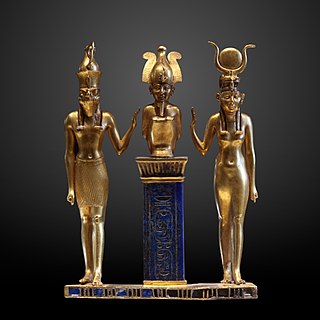 Set is a god of deserts, storms, disorder, violence, and foreigners in ancient Egyptian religion. In Ancient Greek, the god's name is given as Sēth (Σήθ). Set had a positive role where he accompanies Ra on his barque to repel Apep, the serpent of Chaos. Set had a vital role as a reconciled combatant. He was lord of the red (desert) land, where he was the balance to Horus' role as lord of the black (soil) land.

Nephthys or Nebet-Het in ancient Egyptian was a goddess in ancient Egyptian religion. A member of the Great Ennead of Heliopolis in Egyptian mythology, she was a daughter of Nut and Geb. Nephthys was typically paired with her sister Isis in funerary rites because of their role as protectors of the mummy and the god Osiris and as the sister-wife of Set. 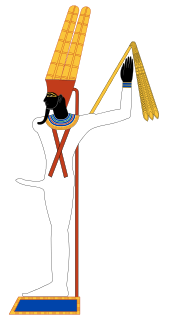 Min is an ancient Egyptian god whose cult originated in the predynastic period. He was represented in many different forms, but was most often represented in male human form, shown with an erect penis which he holds in his left hand and an upheld right arm holding a flail.

Khonsu is the ancient Egyptian god of the Moon. His name means "traveller", and this may relate to the perceived nightly travel of the Moon across the sky. Along with Thoth he marked the passage of time. Khonsu was instrumental in the creation of new life in all living creatures. At Thebes he formed part of a family triad with Mut as his mother and Amun his father. 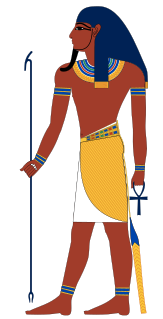 The Ennead or Great Ennead was a group of nine deities in Egyptian mythology worshiped at Heliopolis: the sun god Atum; his children Shu and Tefnut; their children Geb and Nut; and their children Osiris, Isis, Seth, and Nephthys. The Ennead sometimes includes the son of Osiris and Isis, Horus.

Sobek was an ancient Egyptian deity with a complex and fluid nature. He is associated with the Nile crocodile or the West African crocodile and is represented either in its form or as a human with a crocodile head. Sobek was also associated with pharaonic power, fertility, and military prowess, but served additionally as a protective deity with apotropaic qualities, invoked particularly for protection against the dangers presented by the Nile.

Andjety is a local ancient Egyptian deity of the ninth nome, centered at Andjet, which was known as Busiris to the Greeks. This deity is also known by the alternative names Anezti or Anedjti. Andjety is considered one of the earliest Egyptian gods, possibly with roots in prehistoric Egypt. 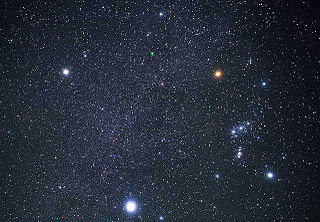 Sopdet is the ancient Egyptian name of the star Sirius and its personification as an Egyptian goddess. Known to the Greeks as Sothis, she was conflated with Isis as a goddess and Anubis as a god. 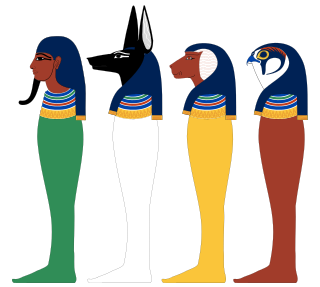 The four sons of Horus were a group of four gods in ancient Egyptian religion, who were essentially the personifications of the four canopic jars, which accompanied mummified bodies. Since the heart was thought to embody the soul, it was left inside the body. The brain was thought only to be the origin of mucus, so it was reduced to liquid, removed with metal hooks, and discarded. This left the stomach, liver, large intestines, and lungs, which were removed, embalmed and stored, each organ in its own jar. There were times when embalmers deviated from this scheme: during the 21st Dynasty they embalmed and wrapped the viscera and returned them to the body, while the canopic jars remained empty symbols. 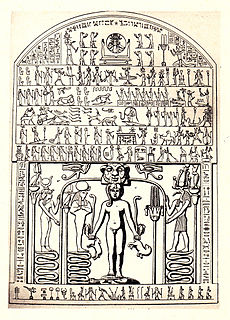 The Metternich Stela is a magico-medical stele that is part of the Egyptian Collection of the Metropolitan Museum of Art in New York City. It dates to the Thirtieth Dynasty of Egypt around 380–342 B.C. during the reign of Nectanebo II. The provenance of the stele is unknown.

Ra or Re is the ancient Egyptian deity of the sun. By the Fifth Dynasty in the 25th and 24th centuries BC, he had become one of the most important gods in ancient Egyptian religion, identified primarily with the noon sun. Ra was believed to rule in all parts of the created world: the sky, the Earth, and the underworld. He was the god of the sun, order, kings and the sky. 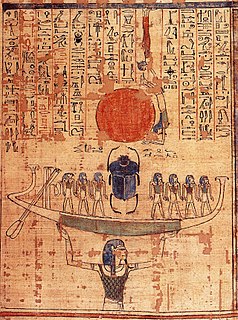 Egyptian mythology is the collection of myths from ancient Egypt, which describe the actions of the Egyptian gods as a means of understanding the world around them. The beliefs that these myths express are an important part of ancient Egyptian religion. Myths appear frequently in Egyptian writings and art, particularly in short stories and in religious material such as hymns, ritual texts, funerary texts, and temple decoration. These sources rarely contain a complete account of a myth and often describe only brief fragments. 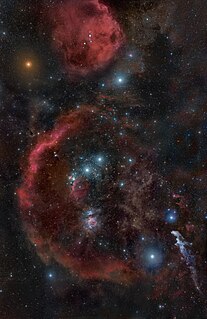 Sah was a god in ancient Egyptian religion, representing a constellation that encompassed the stars in Orion and Lepus, as well as stars found in some neighboring modern constellations. His consort was Sopdet known by the ancient Greek name as Sothis, the goddess of the star Sirius. Sah came to be associated with a more important deity, Osiris, and Sopdet with Osiris's consort Isis.