Khiva (Uzbek : Xiva/Хива, خىۋا; Persian : خیوه‎, Xīveh; alternative or historical names include Kheeva, Khorasam, Khoresm, Khwarezm, Khwarizm, Khwarazm, Chorezm, Arabic : خوارزم‎ and Persian : خوارزم‎) is a city of approximately 90,000 people in Xorazm Region, Uzbekistan. According to archaeological data, the city was established around 1500 years ago. [1] It is the former capital of Khwarezmia and the Khanate of Khiva. Itchan Kala in Khiva was the first site in Uzbekistan to be inscribed in the World Heritage List (1991). The astronomer, historian and polymath, Al-Biruni [2] (973-1048 CE) was born in either Khiva or the nearby city of Kath.

The origin of the name Khiva is unknown, but many contradictory stories have been told to explain it.

A traditional story attributes the name to one of the sons of the prophet Noah: "It is said that Shem [from whence the word Semitic is derived], after the flood, he found himself wandering in the desert alone. Having fallen asleep, he dreamt of 300 burning torches. On waking up, he was pleased with this omen, he founded the city with outlines in the form of a ship mapped out according to the placement of the torches, about which he had dreamt. Then Shem dug the 'Kheyvak' well, the water from which had a surprising taste. It is possible to see this well in Ichan-Kala (an internal town of Khiva City) even today." [3]

Another story relates that travellers passing through the city, upon drinking the excellent water, would exclaim "Khey vakh!" ("What a pleasure!") and hence the city became known as Kheyvakh, whence Khiva. In Hindi, "Hey vah" is equivalent to "What a pleasure." Russian language used in the region for quite long, has no equivalence of "h" and its closest alternative is "kh". This transforms "Hey vah" into "Khey vakh".

A third proposal is that the name comes from the word Khwarezm, altered by borrowing into Turkic as Khivarezem, then shortened to Khiva.

In the early part of its history, the inhabitants of the area came from Iranian stock and spoke an Eastern Iranian language called Khwarezmian. Turks replaced the Iranian ruling-class in the 10th century A.D., and the region gradually turned into an area with a majority of Turkic speakers.

Russia joined Khiva Khanate in the 19th century. The last Khan was liquidated from the ruling dynasty in 1919 a century later. Thus the new Soviet People's Republic of Khorezm became capital. Khorezm oasis was converted into a modern part of Uzbekistan and Turkmenistan in 1924. [4]

The earliest records of the city of Khiva appear in Muslim travel accounts from the 10th century[ citation needed ], although archaeological evidence indicates habitation in the 6th century. [5] By the early 17th century, Khiva had become the capital of the Khanate of Khiva, ruled by a branch of the Astrakhans, a Genghisid dynasty.

In the 17th century Khiva began to develop as a slave market. During the first half of the 19th century, around 30000 Persians and an unknown number of Russians, were enslaved there before being sold. A large part of them were involved in the construction of buildings in the walled Ichan-Kala. [5]

In the course of the Russian conquest of Central Asia, in 1873 the Russian General Konstantin von Kaufman launched an attack on the city of Khiva, which fell on 28 May 1873. Although the Russian Empire now controlled the Khanate, it allowed Khiva to remain as a nominally quasi-independent protectorate.

Following the Bolshevik seizure of power in Russia after the October Revolution of 1917, a short-lived (1920-1925) Khorezm People's Soviet Republic formed out of the territory of the old Khanate of Khiva before its incorporation into the USSR in 1925. The city of Khiva became part of the Uzbek Soviet Socialist Republic.

Khiva is split into two parts. The outer town, called Dichan Kala, was formerly protected by a wall with 11 gates. The inner town, or Itchan Kala, is encircled by brick walls, whose foundations are believed to have been laid in the 10th century. Present-day crenellated walls date back to the late 17th century and attain the height of 10 meters.

Kalta Minor, the large blue tower in the central city square, was supposed to be a minaret, but the Khan died and the succeeding Khan did not complete it.

The old town retains more than 50 historic monuments and 250 old houses, mostly dating from the 18th or the 19th centuries. Djuma Mosque, for instance, was established in the 10th century and rebuilt in 1788–89, although its celebrated hypostyle hall still retains 112 columns taken from ancient structures. [6]

Khiva was a home to a number of madrassahs (educational establishments), one of which, Sherghazi Khan madrassah, still stands today. It was built in the 18th century by slaves and is one of the oldest buildings in Ichan-Kala, that is the center of present-day Khiva. Among the renowned students of the madrassah were the Uzbek poet Raunaq, the Qaraqalpaq poet Kasybayuly, the Turkmen poet and sufi Magtymguly. [7]

The following list is Khiva's sister and twinned cities:

The Uzbeks are a Turkic ethnic group native to wider Central Asia, being the largest Turkic ethnic group in the area. They comprise the majority population of Uzbekistan but are also found as a minority group in: Afghanistan, Tajikistan, Kyrgyzstan, Kazakhstan, Turkmenistan, Russia, and China. Uzbek diaspora communities also exist in Turkey, Pakistan, Saudi Arabia, United States, Ukraine, and other countries. 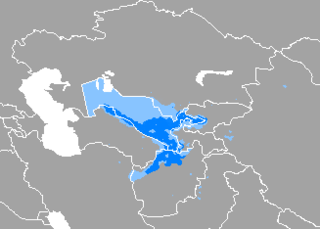 Turkestan, also spelled Turkistan, is a historical region in Central Asia corresponding to the regions of Transoxiana and Xinjiang.

Khwarazm, or Chorasmia, is a large oasis region on the Amu Darya river delta in western Central Asia, bordered on the north by the (former) Aral Sea, on the east by the Kyzylkum Desert, on the south by the Karakum Desert, and on the west by the Ustyurt Plateau. It was the center of the Iranian Khwarazmian civilization, and a series of kingdoms such as the Khwarazmian dynasty and the Afrighid dynasty, whose capitals were Kath, Gurganj and – from the 16th century on – Khiva. Today Khwarazm belongs partly to Uzbekistan and partly to Turkmenistan. 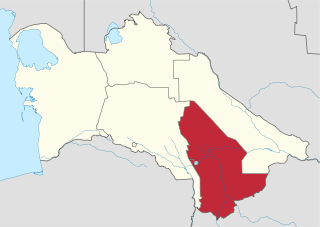 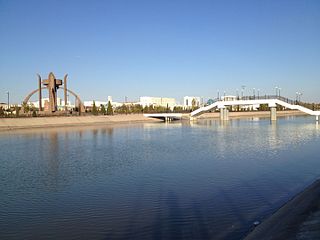 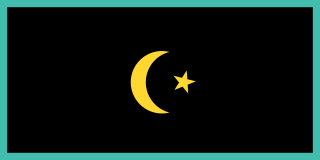 The Khanate of Khiva was a Central Asian polity that existed in the historical region of Khwarezm in Central Asia from 1511 to 1920, except for a period of Afsharid occupation by Nader Shah between 1740 and 1746. Centred in the irrigated plains of the lower Amu Darya, south of the Aral Sea, with the capital in the city of Khiva, the country was ruled by a Turco-Mongol tribe, the Khongirads, who came from Astrakhan. It covered present western Uzbekistan, southwestern Kazakhstan and much of Turkmenistan before Russian arrival at the second half of the 19th century.

The Khanate of Bukhara was an Uzbek state from the second quarter of the 16th century to the late 18th century in Central Asia or Turkestan, founded by the Shaybanid dynasty. From 1533 to 1540, Bukhara briefly became its capital during the reign of Ubaydallah Khan. The khanate reached its greatest extent and influence under its penultimate Shaybanid ruler, the scholarly Abdullah Khan II. 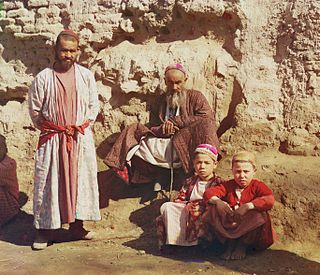 Sart is a name for the settled inhabitants of Central Asia which has had shifting meanings over the centuries. Sarts, known sometimes as Ak-Sart in ancient times, did not have any particular ethnic identification, and were usually town-dwellers.

The Kazakh Khanate was a successor of the Golden Horde existing from the 15th to 19th century, centered on the eastern parts of the Desht-i Qipchaq.

The Shaybanids were a Persianized Turko-Mongol dynasty in Central Asia who ruled over most of modern-day Kazakhstan, much of Uzbekistan, and parts of southern Russia in the 15th century. They were the patrilineal descendants of Shiban, the fifth son of Jochi and grandson of Genghis Khan. Until the mid-14th century, they acknowledged the authority of the descendants of Shiban's brothers Batu Khan and Orda Khan, such as Öz Beg Khan. The Shaybanids originally led the grey horde southeast of the Urals, and converted to Islam in 1282. At its height, the khanate included parts of modern-day Afghanistan and other parts of Central Asia.

The Sufid dynasty was a Turkic dynasty that ruled in Khwarezm within the realm of Mongols' Golden Horde Khanate, in the Amu Darya river delta. Although the dynasty's independence was short-lived, its later members continued to rule Khwarezm intermittently as governors of the Timurid Empire until the takeover of Khwarezm by the Shaybanid Uzbeks in 1505. Unlike earlier dynasties that ruled from Khwarezm, the Sufids never used the title of Khwarezmshah.

Iranian Turkmens are a Turkmen diaspora living mainly in northern and northeastern regions of Iran. Their region is called Turkmen Sahra and includes substantial parts of Golestan Province of Iran.

The Khivan Revolution refers to the events of 1917–1924 in the Khanate of Khiva, which led to the liquidation of the Khanate in Khiva, the establishment of the Khorezm People's Soviet Republic, and the subsequent inclusion of the republic into the USSR through national disengagement and the formation of the Uzbek SSR and the Turkmen SSR in 1924.

Seyid Islam Khodja was the Grand Vizier of the Khiva Khanate from 1898 until his death in 1913.

Khudaibergen Devanov was a pioneering Uzbek photographer, cinematographer, filmmaker and cameraman. He is regarded as a great figure of culture in his home of Khiva, responsible for taking photos of his city and its figures.

Bekjon Rakhmonov, known commonly as Mulla Bekjon, was an Uzbek and Soviet statesman, political and public figure, educator, linguist, polyglot, and journalist. He was one of the most prominent figures of the Khwarezmian Jadid movement and the Young Khivans. 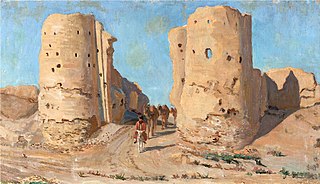 Junaid Khan – was a military commander from the Turkmen yomud tribe who was the (last) de facto ruler of the State of Khorezm from 1918 to 1920, Chief of the Armed forces (Serdar-Kerim) of Khorezm during the tumultuous years after the Russian October revolution.