After being ceded the island in the Treaty of Paris in 1763, Great Britain immediately sought to bring its own settlers to occupy the vacated Acadian holdings. In 1764, Great Britain ordered a survey of what was then called St. John's Island which was completed in 1766. As with other surveys of Britain's North American territories, the survey of St. John's Island was done with the primary goal of encouraging settlement at minimal cost to the treasury. A feudal system was proposed, along the lines of the European experience with lease-tenure.

Three counties of roughly 500,000 acres (2,000 km2): Prince, Queens, and Kings; were surveyed (Kings County being the smallest), each of which had a "royalty" or shire town. Each county was subdivided into five 100,000 acre (400 km2) parishes (for the Church of England) - Kings County having four parishes on account of its smaller size - and each parish was further subdivided into roughly 20,000 acre (80 km2) townships or "lots". Each township/lot were to be granted to individuals with certain conditions of settlement (i.e. personally finance and transport settlers to the island; settlers would be obliged to clear land for their farms and pay annual quitrents which, over time would pay off the initial outlay of the owner and eventually turn a profit). Since more individuals were interested than there were lots available, the government of Great Britain devised a lottery for the sixty four (of sixty seven) lots being granted.

Today, the townships/lots continue to exist on paper and in maps as Prince Edward Island's census subdivisions.

A township is some kind of human settlement or administrative subdivision, with its meaning varying in different countries. 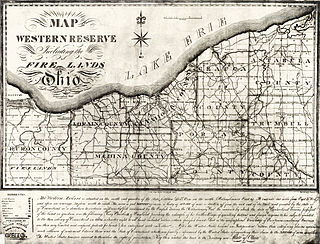 A survey township, sometimes called a Congressional township or just township, as used by the United States Public Land Survey System, is a nominally-square area of land that is nominally six U.S. survey miles on a side. Each 36-square-mile township is divided into 36 sections of one square mile each. The sections can be further subdivided for sale.

The Firelands, or Sufferers' Lands, tract was located at the western end of the Connecticut Western Reserve in what is now the U.S. state of Ohio. It was legislatively established in 1792, as the "Sufferers' Lands", and later became named "Fire Lands" because the resale of the land was intended as financial restitution for residents of the Connecticut towns of Danbury, Fairfield, Greenwich, Groton, New Haven, New London, Norwalk, and Ridgefield. Their homes had been burned in 1779 and 1781 by British forces during the American Revolutionary War. However, most of the settlement of the area did not occur until after the War of 1812. "Fire Lands" was later spelled as one word: "Firelands." 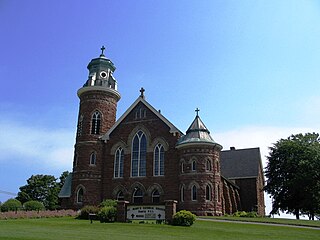 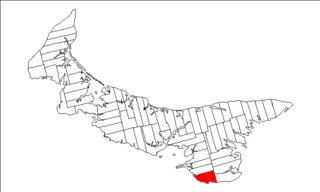 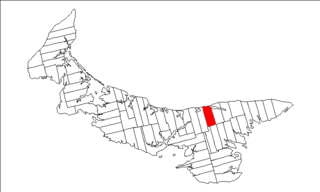 Lot 39 is a township in Kings County, Prince Edward Island, Canada. It is part of St. Patrick's Parish. Lot 39 was one of four lots awarded to the officers of the 78th Fraser Highlanders in the 1767 land lottery. Col. Thomas Dawson purchased 500 acres (2.0 km2) of land in Lot 39 on March 19, 1800, for 135 pounds, 8 shillings and 4 pence, later adding another 100 acres (0.40 km2). He emigrated from Coote Hill, County Cavan, Ireland with wife Elizabeth and six children, arriving in PEI on June 6, 1801. Col. Thomas Dawson (1762–1804) called his new property Dawson's Grove, after a Dawson family property in Ireland. He is buried at Elm Avenue Cemetery, Charlottetown, PEI.

Lands administrative divisions of Australia are the cadastral divisions of Australia for the purposes of identification of land to ensure security of land ownership. Most states term these divisions as counties, parishes, hundreds, and other terms. The eastern states of Queensland, New South Wales, Victoria, and Tasmania were divided into counties and parishes in the 19th century, although the Tasmanian counties were renamed land districts in the 20th century. Parts of South Australia (south-east) and Western Australia (south-west) were similarly divided into counties, and there were also five counties in a small part of the Northern Territory. However South Australia has subdivisions of hundreds instead of parishes, along with the Northern Territory, which was part of South Australia when the hundreds were proclaimed. There were also formerly hundreds in Tasmania. There have been at least 600 counties, 544 hundreds and at least 15,692 parishes in Australia, but there are none of these units for most of the sparsely inhabited central and western parts of the country. 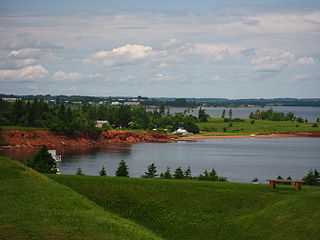 Wilmot is an unincorporated community located in Annapolis County in the Canadian province of Nova Scotia.

The Twelve Mile Square Reservation, also called the Twelve Mile Square Reserve, was a tract of land in Ohio ceded by Indians to the United States of America in the Treaty of Greenville in 1795. This particular area of land immediately surrounding Fort Miami was considered to be of strategic importance by the United States government representatives. It was subsequently surveyed in a manner different from surrounding land, and lots sold, or granted, to settlers.