The three-toed sloths are arboreal neotropical mammals (also known as "three-fingered" sloths). [2] They are the only members of the genus Bradypus and the family Bradypodidae. The four living species of three-toed sloths are the brown-throated sloth, the maned sloth, the pale-throated sloth, and the pygmy three-toed sloth. In complete contrast to past morphological studies, which tended to place Bradypus as the sister group to all other folivorans, molecular studies place them nested within the sloth superfamily Megatherioidea, making them the only surviving members of that radiation. [2] [3]

Relation to the two-toed sloth

Both types of sloth tend to occupy the same forests; in most areas, a particular species of three-toed sloth and a single species of the somewhat larger and generally faster-moving two-toed sloth will jointly predominate. Although similar in overall appearance, the two genera are placed in different families. Recent phylogenetic analyses support the morphological data from the 1970s and 1980s that the two genera are not closely related and that each adopted their arboreal lifestyles independently. [5] From morphological studies it was unclear from which ground-dwelling sloth taxa the three-toed sloths evolved or whether they retained their arboreality from the last common ancestor of extant sloths. The two-toed sloths were thought on the basis of morphology to nest phylogenetically within one of the divisions of ground-dwelling Caribbean sloths. [6]

Understanding of sloth phylogeny has recently been greatly revised by molecular studies, based on collagen [3] and mitochondrial DNA [2] sequences. These investigations consistently place three-toed sloths within Megatherioidea, close to Megalonyx , megatheriids and nothrotheriids, and two-toed sloths close to mylodontids, while moving the Caribbean sloths to a separate, basal branch of the sloth evolutionary tree. [3] [2] These results provide further strong support for the long-held belief that arboreality arose separately in the two genera via convergent paths.

Famously slow-moving, a sloth travels at an average speed of 0.24 km/h (0.15 mph). [7] Three-toed sloths are about the size of a small dog or a large cat, with the head and body having a combined length around 45 cm (18 in) and a weight of 3.5–4.5 kg (8–10 lb). Unlike the two-toed sloths, they also have short tails of 6–7 cm (2–3 in), and they have three clawed toes on each limb. All sloths have three digits on their hindlimbs; the difference is found in the number of digits on the forelimbs; thus they are sometimes referred to as three-fingered sloths. [8] However, sloths are generally regarded as quadrupeds.

Like the two-toed sloth, three-toed sloths are agile swimmers. They are still slow in trees. [9] The muscles that sloths use to grip and produce a pulling motion are much more prominent than those that produce a pushing motion. [10] This means that they struggle to support their body weight when walking on all four limbs, so travelling on the ground is a dangerous and laborious process. [11]

Three-toed sloths are arboreal (tree-dwelling), with a body adapted to hang by their limbs. Large, curved claws and muscles specifically adapted for strength and stamina help sloths to keep a strong grip on tree branches. [12] The abdominal organs close to their diaphragm (such as their stomach, liver and kidneys) are attached to their lower ribs (or pelvic girdle in the latter case) by fibrinous adhesions, which prevent the weight of these organs from compressing their lungs when hanging, making inhalation easier. [13]

They live high in the canopy, but descend once a week to defecate on the forest floor. During this week-long interval their feces and urine accumulate to about a third of their total body mass. [13] It takes about a month for a single leaf to pass through their four-chambered stomach and digestive tract. [14] Although they get most of their fluids from the  leaves that they eat, they have been observed drinking directly from rivers. [15] Because of their slow metabolism, they do not need to ingest many leaves on a daily basis, but when ambient temperatures are high, the symbiotic microbes and bacteria present in their gut will break down and ferment food at a faster rate. [16] Conversely, when temperatures are lower, sloths will consume less, which is opposite to what has been observed in most other mammals. [17]

Their long, coarse fur often appears greenish, not due to pigment, but to algae growing on it. Sloths' greenish color and their sluggish habits provide an effective camouflage; hanging quietly, sloths resemble a bundle of leaves.

They move between different trees up to four times a day, although they prefer to keep to a particular type of tree, which varies between individuals, perhaps as a means of allowing multiple sloths to occupy overlapping home ranges without competing with each other. [18]

Members of this genus tend to live around 25 to 30 years, reaching sexual maturation at three to five years of age.

The home ranges used by wild brown-throated three-toed sloths in Costa Rica include cacao, pasture, riparian forests, peri-urban areas and living fence-rows. [22] For the first few months after giving birth, mothers remain at just one or two trees, and guide their young. At about five to seven months of age, when the young have become more independent, mothers expand their resources and leave their young in new areas. During natal dispersion, three-toed sloths prefer tropical forests, often using riparian forest habitat to disperse while avoiding pastures and shade-grown cacao. [23] The home range for mothers are larger than those of young. After separation, only the mothers use the cacao-growing forest, but both use riparian forest. Different types of trees are used by both mother and young, which indicates that this agricultural matrix provides an important habitat type for these animals. [24]

Three-toed sloths have no incisor or canine teeth, just a set of peg-shaped cheek teeth that are not clearly divided into premolars and molars, and lack homology with those teeth in other mammals, thus are referred to as molariforms. The molariform dentition in three-toed sloths is simple and can be characterized as dental formula of: 54-5. [25]

Xenarthra is a major clade of placental mammals unique to the Americas. There are 31 living species: the anteaters, tree sloths, and armadillos. Extinct xenarthrans are the glyptodonts, the ground sloths, and the aquatic sloths. Xenarthrans originated in South America during the Paleocene about 59 million years ago. They evolved and diversified extensively in South America during the continent's long period of isolation in the early to mid Cenozoic Era. They spread to the Antilles by the early Miocene and, starting about 3 Mya, spread to Central and North America as part of the Great American Interchange. Nearly all of the formerly abundant megafaunal xenarthrans became extinct at the end of the Pleistocene. 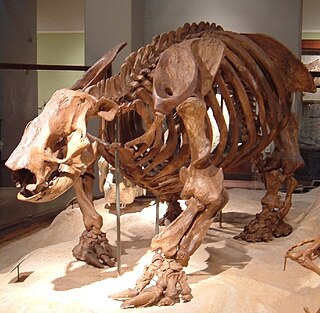 Mylodontidae is a family of extinct South American and North American ground sloths within the suborder Folivora of order Pilosa, living from around 23 million years ago (Mya) to 11,000 years ago. This family is most closely related to another family of extinct ground sloths, Scelidotheriidae, as well as to the extant arboreal two-toed sloths, family Choloepodidae; together these make up the superfamily Mylodontoidea. Phylogenetic analyses based on morphology uncovered the relationship between Mylodontidae and Scelidotheriidae; in fact, the latter was for a time considered a subfamily of mylodontids. However, molecular sequence comparisons were needed for the correct placement of Choloepodidae. These studies have been carried out using mitochondrial DNA sequences as well as with collagen amino acid sequences. The latter results indicate that Choloepodidae is closer to Mylodontidae than Scelidotheriidae is. The only other living sloth family, Bradypodidae, belongs to a different sloth radiation, Megatherioidea.

Scelidotheriidae is a family of extinct ground sloths within the order Pilosa, suborder Folivora and superfamily Mylodontoidea, related to the other extinct mylodontoid family, Mylodontidae, as well as to the living two-toed sloth family Choloepodidae. The only other extant family of the suborder Folivora is the distantly related Bradypodidae. Erected as the family Scelidotheriidae by Ameghino in 1889, the taxon was demoted to a subfamily by Gaudin in 1995. However, recent collagen sequence data indicates the group is less closely related to Mylodon and Lestodon than Choloepus is, and thus it has been elevated back to full family status by Presslee et al. (2019).

The pale-throated sloth, occasionally known as the ai, is a species of three-toed sloth that inhabits tropical rainforests in northern South America. 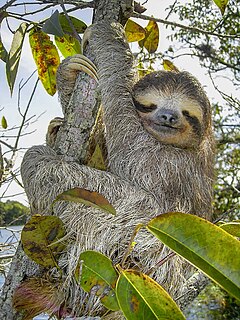 The brown-throated sloth is a species of three-toed sloth found in the Neotropical realm of Central and South America. 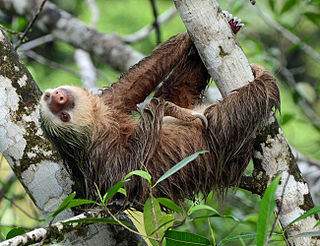 Linnaeus's two-toed sloth, also known as the southern two-toed sloth, unau, or Linne's two-toed sloth is a species of sloth from South America, found in Venezuela, the Guyanas, Colombia, Ecuador, Peru, and Brazil north of the Amazon River. There is now evidence suggesting the species' range expands into Bolivia. 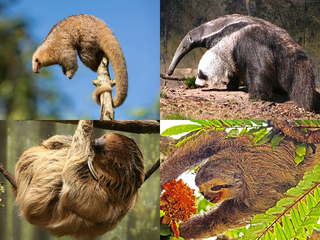 The order Pilosa is a group of placental mammals, extant today only in the Americas. It includes the anteaters and sloths, including the extinct ground sloths, which became extinct about 10,000 years ago. The name comes from the Latin word for "hairy". Pilosans are good examples of ecological harmony. Anteaters, for example, feed lightly and for a short time at any one ant nest, allowing the colony to regrow easily. Also, sloths' fur is home to many insects, as well as a type of alga that helps camouflage the sloths.

Choloepus is a genus of xenarthran mammals of Central and South America within the monotypic family Choloepodidae, consisting of two-toed sloths. The two species of Choloepus, Linnaeus's two-toed sloth and Hoffmann's two-toed sloth, were formerly believed on the basis of morphological studies to be the only surviving members of the sloth family Megalonychidae, but have now been shown by molecular results to be closest to extinct ground sloths of the family Mylodontidae. 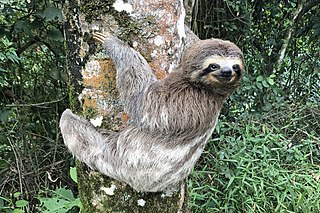 Sloths are a group of arboreal Neotropical xenarthran mammals, constituting the suborder Folivora. Noted for their slowness of movement, they spend most of their lives hanging upside down in the trees of the tropical rainforests of South America and Central America. They are considered to be most closely related to anteaters, together making up the xenarthran order Pilosa. 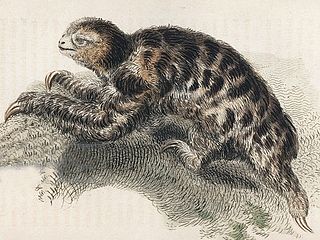 The pygmy three-toed sloth, also known as the monk sloth or dwarf sloth, is a sloth endemic to Isla Escudo de Veraguas, a small island off the Caribbean coast of Panama. The species was first described by Robert P. Anderson of the University of Kansas and Charles O. Handley Jr., of the Smithsonian Institution in 2001. The pygmy three-toed sloth is significantly smaller than the other three members of its genus, but otherwise resembles the brown-throated three-toed sloth. According to Anderson and Handley Jr., the head-and-body length is between 48 and 53 centimetres, and the body mass ranges from 2.5 to 3.5 kg.

Acratocnus is an extinct genus of ground sloths that were found on Cuba, Hispaniola, and Puerto Rico.

Pliometanastes is an extinct genus of giant ground sloths of the family Megalonychidae endemic to North America during the Late Miocene epoch through very early Pliocene epoch. Its fossils have been found in Costa Rica and across the southern United States from California to Florida. 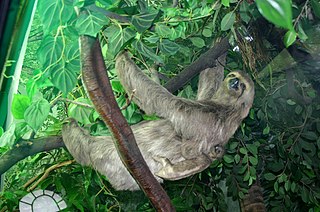 A large number of arthropods are associated with sloths. These include biting and blood-sucking flies such as mosquitoes and sandflies, triatomine bugs, lice, ticks and mites. The sloth’s fur forms a micro-ecozone inhabited by green algae and hundreds of insects. Sloths have a highly specific community of commensal beetles, mites and moths. 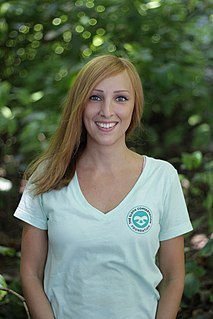 Rebecca Cliffe is a British zoologist and one of the leading experts on sloth biology and ecology. She is the Founder and Executive Director of The Sloth Conservation Foundation and author of the book Sloths: Life in the Slow Lane with photographs by award-winning wildlife photographer Suzi Eszterhas.

TheSloth Conservation Foundation (SloCo) is a non-profit organisation based in Costa Rica that is dedicated to the protection of sloths living in wild and human-modified habitats through research, education and community-based conservation. SloCo was founded in 2017 by sloth researcher Dr. Rebecca Cliffe.