Last updated May 19, 2020
This article is about the transport protein. For the investment company, see TBG AG.

The patient's serum is mixed with the labeled thyroid hormone; next, the resin is added to the whole mixture to measure the amount of free labeled thyroid hormone. So, for instance, if the patient is truly hypothyroid, and TBG levels are normal, then there are many sites open for binding on the TBG, since the total thyroid hormone level is low. Therefore, when the labeled hormone is added, it will bind mostly to the TBG, leaving little of it left for binding to the resin. In contrast, however, if the patient is truly hyperthyroid, and TBG levels are normal, the patient's endogenous hormone will saturate the TBG binding sites more, leaving less room for the labeled hormone, which allows greater binding to the resin. 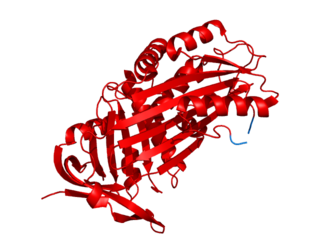 Transcortin, also known as corticosteroid-binding globulin (CBG) or serpin A6, is a protein produced in the liver in animals. In humans it is encoded by the SERPINA6 gene. It is an alpha-globulin.

Sex hormone-binding globulin (SHBG) or sex steroid-binding globulin (SSBG) is a glycoprotein that binds to androgens and estrogens. Other steroid hormones such as progesterone, cortisol, and other corticosteroids are bound by transcortin. SHBG is found in all vertebrates apart from birds.

Desiccated thyroid, also known as thyroid extract, is thyroid gland that has been dried and powdered for medical use. It is used to treat hypothyroidism. It is less preferred than levothyroxine. It is taken by mouth. Maximal effects may take up to 3 weeks to occur.

Gonadotropin-releasing hormone receptor is a protein that in humans is encoded by the GNRHR gene.

3-oxo-5α-steroid 4-dehydrogenase 2 is an enzyme that in humans is encoded by the SRD5A2 gene. It is one of three forms of 5α-reductase.

HSD3B2 is a human gene that encodes for 3beta-hydroxysteroid dehydrogenase/delta(5)-delta(4)isomerase type II or hydroxy-delta-5-steroid dehydrogenase, 3 beta- and steroid delta-isomerase 2. It is expressed principally in steroidogenic tissues and is essential for steroid hormone production. A notable exception is the placenta, where HSD3B1 is critical for progesterone production by this tissue.

Homeobox protein prophet of PIT-1 is a protein that in humans is encoded by the PROP1 gene.