Last updated September 17, 2021
Light-sensitive receptor protein
This article is about the visual rhodopsin of vertebrates. For other types of rhodopsin, see Retinylidene protein.

Rhodopsin (also known as visual purple) is a light-sensitive receptor protein involved in visual phototransduction. It is named after ancient Greek ῥόδον (rhódon) for rose, due to its pinkish color, and ὄψις (ópsis) for sight. [5] Rhodopsin is a biological pigment found in the rods of the retina and is a G-protein-coupled receptor (GPCR). It belongs to a group of photoswitchable opsins. Rhodopsin is extremely sensitive to light, and thus enables vision in low-light conditions. [6] When rhodopsin is exposed to light, it immediately photobleaches. In humans, it is regenerated fully in about 30 minutes, after which rods are more sensitive. [7]

Rhodopsin consists of two components, a protein molecule also called scotopsin and a covalently-bound cofactor called retinal. Scotopsin is an opsin, a light-sensitive G protein coupled receptor that embeds in the lipid bilayer of cell membranes using seven protein transmembrane domains. These domains form a pocket where the photoreactive chromophore, retinal, lies horizontally to the cell membrane, linked to a lysine residue in the seventh transmembrane domain of the protein. Thousands of rhodopsin molecules are found in each outer segment disc of the host rod cell. Retinal is produced in the retina from vitamin A, from dietary beta-carotene. Isomerization of 11-cis-retinal into all-trans-retinal by light sets off a series of conformational changes ('bleaching') in the opsin, eventually leading it to a form called metarhodopsin II (Meta II), which activates an associated G protein, transducin, to trigger a cyclic guanosine monophosphate (cGMP) second messenger cascade. [7] [10] [11]

Rhodopsin of the rods most strongly absorbs green-blue light and, therefore, appears reddish-purple, which is why it is also called "visual purple". [12] It is responsible for monochromatic vision in the dark. [7]

Several closely related opsins differ only in a few amino acids and in the wavelengths of light that they absorb most strongly. Humans have eight other opsins besides rhodopsin, as well as cryptochrome (light-sensitive, but not an opsin). [13] [14]

The photopsins are found in the cone cells of the retina and are the basis of color vision. They have absorption maxima for yellowish-green (photopsin I), green (photopsin II), and bluish-violet (photopsin III) light. The remaining opsin, melanopsin, is found in photosensitive ganglion cells and absorbs blue light most strongly.

In rhodopsin, the aldehyde group of retinal is covalently linked to the amino group of a lysine residue on the protein in a protonated Schiff base (-NH+=CH-). [15] When rhodopsin absorbs light, its retinal cofactor isomerizes from the 11-cis to the all-trans configuration, and the protein subsequently undergoes a series of relaxations to accommodate the altered shape of the isomerized cofactor. The intermediates formed during this process were first investigated in the laboratory of George Wald, who received the Nobel prize for this research in 1967. [16] The photoisomerization dynamics has been subsequently investigated with time-resolved IR spectroscopy and UV/Vis spectroscopy. A first photoproduct called photorhodopsin forms within 200 femtoseconds after irradiation, followed within picoseconds by a second one called bathorhodopsin with distorted all-trans bonds. This intermediate can be trapped and studied at cryogenic temperatures, and was initially referred to as prelumirhodopsin. [17] In subsequent intermediates lumirhodopsin and metarhodopsin I, the Schiff's base linkage to all-trans retinal remains protonated, and the protein retains its reddish color. The critical change that initiates the neuronal excitation involves the conversion of metarhodopsin I to metarhodopsin II, which is associated with deprotonation of the Schiff's base and change in color from red to yellow. [18]

The structure of rhodopsin has been studied in detail via x-ray crystallography on rhodopsin crystals. [19] Several models (e.g., the bicycle-pedal mechanism, hula-twist mechanism) attempt to explain how the retinal group can change its conformation without clashing with the enveloping rhodopsin protein pocket. [20] [21] [22] Recent data support that rhodopsin is a functional monomer, instead of a dimer, which was the paradigm of G-protein-coupled receptors for many years. [23]

Rhodopsin is an essential G-protein coupled receptor in phototransduction.

The product of light activation, Metarhodopsin II, initiates the visual phototransduction pathway by stimulating the G protein transducin (Gt), resulting in the liberation of its α subunit. This GTP-bound subunit in turn activates cGMP phosphodiesterase. cGMP phosphodiesterase hydrolyzes (breaks down) cGMP, lowering its local concentration so it can no longer activate cGMP-dependent cation channels. This leads to the hyperpolarization of photoreceptor cells, changing the rate at which they release transmitters.

Mutation of the rhodopsin gene is a major contributor to various retinopathies such as retinitis pigmentosa. In general, the disease-causing protein aggregates with ubiquitin in inclusion bodies, disrupts the intermediate filament network, and impairs the ability of the cell to degrade non-functioning proteins, which leads to photoreceptor apoptosis. [25] Other mutations on rhodopsin lead to X-linked congenital stationary night blindness, mainly due to constitutive activation, when the mutations occur around the chromophore binding pocket of rhodopsin. [26] Several other pathological states relating to rhodopsin have been discovered including poor post-Golgi trafficking, dysregulative activation, rod outer segment instability and arrestin binding. [26]

Some prokaryotes express proton pumps called bacteriorhodopsins, archaerhodopsins, proteorhodopsins, heliorhodopsins and xanthorhodopsins to carry out phototrophy. [27] Like animal visual pigments, these contain a retinal chromophore (although it is an all-trans, rather than 11-cis form) and have seven transmembrane alpha helices; however, they are not coupled to a G protein. Prokaryotic halorhodopsins are light-activated chloride pumps. [27] Unicellular flagellate algae contain channelrhodopsins that act as light-gated cation channels when expressed in heterologous systems. Many other pro- and eukaryotic organisms (in particular, fungi such as Neurospora) express rhodopsin ion pumps or sensory rhodopsins of yet-unknown function. Very recently, microbial rhodopsins with guanylyl cyclase activity have been discovered. [28] [29] [30] While all microbial rhodopsins have significant sequence homology to one another, they have no detectable sequence homology to the G-protein-coupled receptor (GPCR) family to which animal visual rhodopsins belong. Nevertheless, microbial rhodopsins and GPCRs are possibly evolutionarily related, based on the similarity of their three-dimensional structures. Therefore, they have been assigned to the same superfamily in Structural Classification of Proteins (SCOP). [31]

Retinitis pigmentosa (RP) is a genetic disorder of the eyes that causes loss of vision. Symptoms include trouble seeing at night and decreased peripheral vision. As peripheral vision worsens, people may experience "tunnel vision". Complete blindness is uncommon. Onset of symptoms is generally gradual and often in childhood. 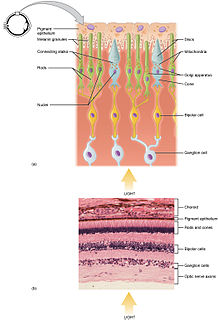 A photoreceptor cell is a specialized type of neuroepithelial cell found in the retina that is capable of visual phototransduction. The great biological importance of photoreceptors is that they convert light into signals that can stimulate biological processes. To be more specific, photoreceptor proteins in the cell absorb photons, triggering a change in the cell's membrane potential. 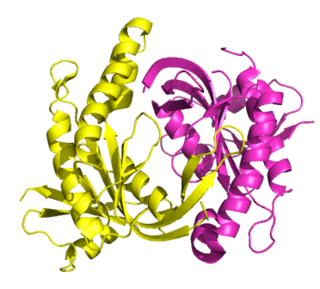 Retinal is a polyene chromophore. Retinal, bound to proteins called opsins, is the chemical basis of visual phototransduction, the light-detection stage of visual perception (vision).

Opsins are a group of proteins made light-sensitive via the chromophore retinal found in photoreceptor cells of the retina. Five classical groups of opsins are involved in vision, mediating the conversion of a photon of light into an electrochemical signal, the first step in the visual transduction cascade. Another opsin found in the mammalian retina, melanopsin, is involved in circadian rhythms and pupillary reflex but not in vision.

Visual phototransduction is the sensory transduction of the visual system. It is a process by which light is converted into electrical signals in the rod cells, cone cells and photosensitive ganglion cells of the retina of the eye. This cycle was elucidated by George Wald (1906–1997) for which he received the Nobel Prize in 1967. It is so called "Wald's Visual Cycle" after him.

The photoreceptor cell-specific nuclear receptor (PNR), also known as NR2E3, is a protein that in humans is encoded by the NR2E3 gene. PNR is a member of the nuclear receptor super family of intracellular transcription factors.

Peropsin, a visual pigment-like receptor, is a protein that in humans is encoded by the RRH gene.

RPE-retinal G protein-coupled receptor also known as RGR-opsin is a protein that in humans is encoded by the RGR gene.

X-linked retinitis pigmentosa GTPase regulator is a GTPase-binding protein that in humans is encoded by the RPGR gene. The gene is located on the X-chromosome and is commonly associated with X-linked retinitis pigmentosa (XLRP). In photoreceptor cells, RPGR is localized in the connecting cilium which connects the protein-synthesizing inner segment to the photosensitive outer segment and is involved in the modulation of cargo trafficked between the two segments.

Peripherin-2 is a protein, that in humans is encoded by the PRPH2 gene. Peripherin-2 is found in the rod and cone cells of the retina of the eye. Defects in this protein result in one form of retinitis pigmentosa, an incurable blindness.

Rod cGMP-specific 3',5'-cyclic phosphodiesterase subunit beta is the beta subunit of the protein complex PDE6 that is encoded by the PDE6B gene. PDE6 is crucial in transmission and amplification of visual signal. The existence of this beta subunit is essential for normal PDE6 functioning. Mutations in this subunit are responsible for retinal degeneration such as retinitis pigmentosa or congenital stationary night blindness.

S-arrestin is a protein that in humans is encoded by the SAG gene.

Neural retina-specific leucine zipper protein is a protein that in humans is encoded by the NRL gene.

Rod cGMP-specific 3',5'-cyclic phosphodiesterase subunit alpha is an enzyme that in humans is encoded by the PDE6A gene.

Retinal degeneration is a retinopathy which consists in the deterioration of the retina caused by the progressive death of its cells. There are several reasons for retinal degeneration, including artery or vein occlusion, diabetic retinopathy, R.L.F./R.O.P., or disease. These may present in many different ways such as impaired vision, night blindness, retinal detachment, light sensitivity, tunnel vision, and loss of peripheral vision to total loss of vision. Of the retinal degenerative diseases retinitis pigmentosa (RP) is a very important example.