Last updated March 14, 2021
Non-violent protests at the University of Chicago in 1962

According to Chicago Maroon managing editor Avima Ruder, a staffer at the student paper found a copy of the University budget, and "we discovered that the University owned a lot of segregated apartment buildings...It was really bizarre because our student population at that point was largely white, but there was no segregation, there weren't separate dorms for African American students—if someone had suggested that, people would have been appalled." [1]

Initially foregoing publishing the news, editors gave the apartment addresses to the Student Government, who reached out to the university chapter of the Congress of Racial Equality (CORE) to "conduct six test cases in which African American students attempted and failed to secure apartments in the segregated buildings." [1] Student Government and CORE confronted President George Beadle with their findings and demanded the buildings be desegregated. On January 17, 1962, the Maroon broke the story on the front page of the paper, with the headline, "UC Admits Housing Segregation." [1] Beadle wrote a letter to the paper, agreeing that the university segregation was a problem, emphasized the University's nondiscrimination policy and the difference between on-campus housing, which was open to all, and commercial residential properties acquired by the University, many of which had existing segregation policies. "The only issue on which there is arguable difference of opinion," Beadle wrote, "is the rate at which it is possible to move toward the agreed objective without losing more than is gained." [1]

Frustrated with Beadle's call for "planned, stable integration," CORE activists including Bernie Sanders led a rally at the University of Chicago administration building to protest university president George Beadle's segregated campus housing policy. "We feel it is an intolerable situation when Negro and white students of the university cannot live together in university-owned apartments," Sanders announced at the protest. Sanders and 32 other student activists marched into the building and camped out outside the president's office.

From January 23 to February 5, [2] Sanders and the other civil rights protesters pressured Beadle and the university to form a commission to investigate discrimination. [3] Beadle met with 300 students in the Ida Noyes Hall theater to announce that further sit-ins would be banned and that a committee would be formed to investigate CORE's charges of racial discrimination in University-owned buildings. [4] 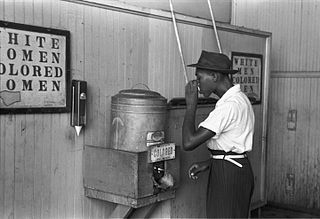 Racial segregation is the systematic separation of people into racial or other ethnic groups in daily life. Racial segregation can amount to the international crime of apartheid and a crime against humanity under the Statute of the International Criminal Court. Segregation can involve the spatial separation of the races, and mandatory use of different institutions, such as schools and hospitals by people of different races. Specifically, it may be applied to activities such as eating in restaurants, drinking from water fountains, using public toilets, attending schools, going to movies, riding buses, renting or purchasing homes or renting hotel rooms. In addition, segregation often allows close contact between members of different racial or ethnic groups in hierarchical situations, such as allowing a person of one race to work as a servant for a member of another race. 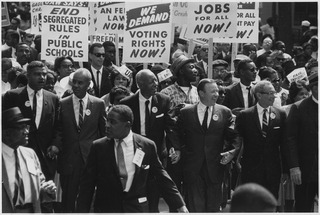 The civil rights movement in the United States was a decades-long campaign by African Americans and their like-minded allies to end institutionalized racial discrimination, disenfranchisement and racial segregation in the United States. The movement has its origins in the Reconstruction era during the late 19th century, although it made its largest legislative gains in the mid-1960s after years of direct actions and grassroots protests. The social movement's major nonviolent resistance and civil disobedience campaigns eventually secured new protections in federal law for the human rights of all Americans.

The Congress of Racial Equality (CORE) is an African-American civil rights organization in the United States that played a pivotal role for African Americans in the civil rights movement. Founded in 1942, its stated mission is "to bring about equality for all people regardless of race, creed, sex, age, disability, sexual orientation, religion or ethnic background." 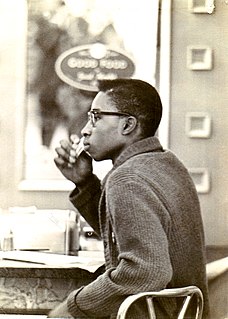 A sit-in or sit-down is a form of direct action that involves one or more people occupying an area for a protest, often to promote political, social, or economic change. The protestors gather conspicuously in a space or building, refusing to move unless their demands are met. The often clearly visible demonstrations are intended to spread awareness among the public, or disrupt the goings-on of the protested organisation. Sit-ins were a form of protest used to oppose segregation, and often provoked heckling and violence from those opposed to their message.

Racial equality occurs when institutions give equal opportunities to people of all races. In other words, regardless of physical traits such as skin color, institutions are to give individuals legal, moral, and political equality. In present-day Western society, diversity and integration among races continues to become normative. Initially, attaining equality has been difficult for African, Asian, and Latino people, especially in schools. However, in the United States, racial equality, has become a law that regardless of what race an individual is, they will receive equal treatment, opportunity, education, employment, and politics.

The Greensboro sit-ins were a series of nonviolent protests in February to July 1960, primarily in the Woolworth store—now the International Civil Rights Center and Museum—in Greensboro, North Carolina, which led to the F. W. Woolworth Company department store chain removing its policy of racial segregation in the Southern United States. While not the first sit-in of the civil rights movement, the Greensboro sit-ins were an instrumental action, and also the best-known sit-ins of the civil rights movement. They are considered a catalyst to the subsequent sit-in movement, in which 70,000 people participated. This sit-in was a contributing factor in the formation of the Student Nonviolent Coordinating Committee (SNCC).

The Big Six—Martin Luther King Jr., James Farmer, John Lewis, A. Philip Randolph, Roy Wilkins and Whitney Young—were the leaders of six prominent civil rights organizations who were instrumental in the organization of the March on Washington for Jobs and Freedom in 1963, at the height of the Civil Rights Movement in the United States.

The Nashville sit-ins, which lasted from February 13 to May 10, 1960, were part of a nonviolent direct action campaign to end racial segregation at lunch counters in downtown Nashville, Tennessee. The sit-in campaign, coordinated by the Nashville Student Movement and the Nashville Christian Leadership Council, was notable for its early success and its emphasis on disciplined nonviolence. It was part of a broader sit-in movement that spread across the southern United States in the wake of the Greensboro sit-ins in North Carolina. 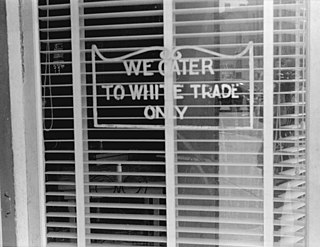 The Chicago Freedom Movement, also known as the Chicago open housing movement, was led by Martin Luther King Jr., James Bevel and Al Raby. It was supported by the Chicago based Coordinating Council of Community Organizations (CCCO) and the Southern Christian Leadership Conference (SCLC). The movement included a large rally, marches, and demands to the City of Chicago. These specific demands covered a wide range of areas besides open housing, and included quality education, transportation and job access, income and employment, health, wealth generation, crime and the criminal justice system, community development, tenants rights, and quality of life. Operation Breadbasket in part led by Jesse Jackson sought to harness African-American consumer power. The Chicago Freedom Movement was the most ambitious civil rights campaign in the North of the United States, lasted from mid-1965 to August 1966, and is largely credited with inspiring the 1968 Fair Housing Act.

Lockefield Gardens was the first public housing built in Indianapolis. Built during the years of 1935 to 1938, it was built exclusively for low income African-Americans in Indianapolis. The complex was closed in 1976, and a number of structures were demolished in the early 1980s. Today, the only original structures remaining are those along Blake Street.

Housing at the University of Chicago includes seven residence halls that are divided into 48 houses. Each house has an average of 70 students. Freshmen and sophomores must live on-campus, and housing is guaranteed but not required thereafter. The University operates 28 apartment buildings near campus for graduate students.

Housing discrimination in the United States refers to the historical and current barriers, policies, and biases that prevent equitable access to housing. Housing discrimination became more pronounced after the abolition of slavery, typically as part of Jim Crow laws that enforced racial segregation. The federal government began to take action against these laws in 1917, when the Supreme Court struck down ordinances prohibiting blacks from occupying or owning buildings in majority-white neighborhoods in Buchanan v. Warley. However, the federal government as well as local governments continued to be directly responsible for housing discrimination through redlining and race-restricted covenants until the Civil Rights Act of 1968.

This is a timeline of the 1954 to 1968 civil rights movement in the United States, a nonviolent mid-20th century freedom movement to gain legal equality and the enforcement of constitutional rights for African Americans. The goals of the movement included securing equal protection under the law, ending legally established racial discrimination, and gaining equal access to public facilities, education reform, fair housing, and the ability to vote.

The New Year's Day March in Greenville, South Carolina was a 1,000-man march that protested the segregated facilities at the Greenville Municipal Airport, now renamed the Greenville Downtown Airport. The march occurred after Richard Henry and Jackie Robinson were prohibited from using a white-only waiting room at the airport. The march was the first large-scale movement of the civil rights movement in South Carolina and Greenville. The march brought state-wide attention to segregation, and the case Henry v. Greenville Airport Commission (1961) ultimately required the airport's integration of its facilities.