Last updated November 25, 2022
Canadian referendum on the prohibition of alcohol

A plebiscite on prohibition was held in Canada on 29 September 1898, the first national referendum in the country's history. [1] The Liberal government had made an election promise in 1896 to provide an opportunity for Canadians to register their opinions about the sale of alcohol. [2] The non-binding plebiscite saw 51.3% in favour of introducing prohibition, although turnout was only 44%. [3] A majority voted for its introduction in all provinces except Quebec, where 81.2% opposed it.

Despite the majority in favour, Prime Minister Wilfrid Laurier's government chose not to introduce a federal bill on prohibition. As a result, Canadian prohibition was instead enacted through laws passed by the provinces during the first twenty years of the 20th century.

A 2012 study found that religion was by far the most important factor in determining how Canadians voted, with Evangelicals favoring prohibition, whereas Catholics and Anglicans opposed it. [4] More urbanized districts were less likely to favor prohibition. [4]

National referendums are seldom used in Canada. The first two referendums in 1898 and 1942 saw voters in Quebec and the remainder of Canada take dramatically-opposing stands, and the third in 1992 saw most of the voters take a stand dramatically opposed to that of the politicians in power.

The Charlottetown Accord was a package of proposed amendments to the Constitution of Canada, proposed by the Canadian federal and provincial governments in 1992. It was submitted to a public referendum on October 26 and was defeated.

The Ontario Temperance Act was a law passed in 1916 that led to the prohibition of alcohol in Ontario, Canada. When the Act was first enacted, the sale of alcohol was prohibited, but liquor could still be manufactured in the province or imported. Strong support for prohibition came from religious elements of society such as the Ontario Woman's Christian Temperance Union, which sought to eliminate what it considered the societal ills and vices associated with liquor consumption, including violent behaviour and familial abuse. Historically, prohibition advocates in Ontario drew inspiration from the temperance movements in Britain and the United States. The Act was repealed in 1927.

Prohibition in Canada was a ban on alcoholic beverages that arose in various stages, from local municipal bans in the late 19th century, to provincial bans in the early 20th century, and national prohibition from 1918 to 1920. The relatively large and powerful beer and alcohol manufacturing sector, and the huge working class that purchased their products, failed to convince any of the governments to reverse their stance on prohibition. Most provinces repealed their bans in the 1920s, though alcohol was illegal in Prince Edward Island from 1901 to 1948. By comparison, Ontario's temperance act was in effect from 1916 to 1927.

An Ontario prohibition plebiscite was held on January 1, 1894 on the legality of alcoholic beverages and the implementation of prohibition. Though a majority of voters indicated support for prohibition, the results were non-binding and prohibition would not occur in Ontario until 1916.

An Ontario prohibition referendum was held on December 4, 1902, under the Liquor Act, on the legality of alcoholic beverages and the implementation of prohibition in the province. Though the referendum passed, a majority of half of the voters in the 1898 election did not support the motion and prohibition was not introduced.

An Ontario prohibition referendum was held on October 20, 1919 on the legality of alcoholic beverages and the maintaining of prohibition. Prohibition had been passed by the provincial government in 1916 under the Ontario Temperance Act, though a clause required a referendum to be held in 1919 on whether the Act should be repealed and the previous licensing laws subsequently revived. A subsequent Act in 1919 provided three further questions for consideration, and subsequent implementation on approval. A majority voted against all four questions, and prohibition was maintained.

An Ontario prohibition referendum was held on April 18, 1921, concerning a ban on the importation of alcoholic beverages into Ontario. The referendum passed, and an importation ban was implemented.

The Quebec referendum on the prohibition of alcohol, held on April 10, 1919, considered the legalization of the sale of beer, cider and wine in the province of Quebec, Canada. The 'yes' side won with 78.62% of the votes.

Canadian liquor plebiscites, held in 1920 under the Canada Temperance Act and the Dominion Elections Act, were referendums on the strengthening of the Prohibition measures in effect in several provinces of Canada. Voters were asked if they supported banning of importation of liquor across provincial boundaries. The referendums were held on July 10, 1920, in New Brunswick; on October 20 in British Columbia; and on October 25 in Alberta, Manitoba, Nova Scotia, and Saskatchewan. 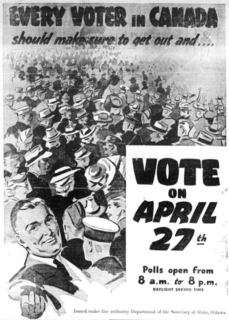 A plebiscite on conscription was held in Canada on 27 April 1942. It was held in response to the Conservative Party lobbying Prime Minister William Lyon Mackenzie King to introduce compulsory overseas military service, the government having previously promised not to introduce same in 1940. The result was 66% voting in favour, with Quebec being the only province to have a majority voting against. Quebec's strong majority against the commitment's release prompted the prime minister not to pursue the issue until later events prompted a change in position.

The Dominion Alliance for the Total Suppression of the Liquor Traffic was an organization established in 1877 in Canada that lobbied for prohibition of alcohol. Membership was largely Protestant and Anglophone. The Dominion Alliance faced passive resistance from politicians concerned about the views of their constituents, particularly in Quebec, but had some success at the local level. Sale of alcohol was prohibited provincially and then nationally during World War I (1914–18). After the war the national and provincial temperance laws were repealed and the Dominion Alliance faded into irrelevance. 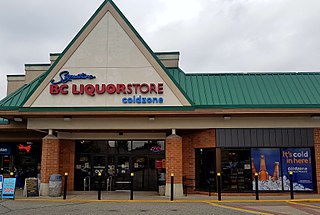 BC Liquor Stores are a chain of crown corporation retail outlets operated by the British Columbia Liquor Distribution Branch to distribute alcoholic beverages in the province of British Columbia, Canada. They are accountable to the Attorney General of British Columbia. BC Liquor Stores currently operate 196 locations across the province. The chain was established in June 1921, following the result of a plebiscite in favour of liquor availability through government liquor stores. Prior to the plebiscite, alcohol had been illegal through the Prohibition Act, introduced on May 23, 1916, with exceptions for sacramental, medicinal or industrial purposes.

A plebiscite on Nova Scotia's prohibition of alcohol sales was held on October 31, 1929. Voters authorized the repeal of the Nova Scotia Temperance Act. This result opened the door to sales of alcohol in a government monopoly of liquor outlets and created the Nova Scotia Liquor Commission on May 1, 1930.

A two-part plebiscite was held in British Columbia on 12 June 1952, alongside provincial elections. Voters were asked whether they approved of continuing with daylight saving time and allowing liquor and wine to be sold in licensed premises. Both proposals were approved.

On October 18, 2021, a referendum was held in Alberta, Canada on two questions, whether equalization payments should be eliminated from the Constitution of Canada, and whether the province should observe daylight saving time year-round. The referendum was held as part of the 2021 Alberta municipal elections and the Senate nominee election.