The Assemblies of God (AG), officially the World Assemblies of God Fellowship, is a group of over 144 autonomous self-governing associated national groupings of churches which together form the world's largest Pentecostal denomination. [5] It is the fourth largest international Christian group of denominations. [6] [7]

Main article: General Council of the Assemblies of God in the United States of America

The Assemblies of God has its roots in the Pentecostal Azusa Street Revival of the early 20th century. Established churches generally did not welcome the Pentecostal aspects of the revival, and participants in the new movement soon found themselves forced outside existing religious bodies. These people sought out their own places of worship and founded hundreds of distinctly Pentecostal congregations. By 1914 many ministers and laymen alike began to realize just how far-reaching the spread of the revival and of Pentecostalism had become. Concerned leaders felt the desire to protect and preserve the results of the revival by uniting through cooperative fellowship.

Prior to 1967 the Assemblies of God, along with the majority of other Pentecostal denominations, officially opposed Christian participation in war and considered itself a peace church. [9] The US Assemblies of God continues to give full doctrinal support to members who are led by religious conscience to pacifism.

In 1988, the various Assemblies of God national fellowships united to form the World Pentecostal Assemblies of God Fellowship at the initiative of Dr. J. Philip Hogan, then executive director of the Division of Foreign Missions of the Assemblies of God in the United States. The initial purpose was to coordinate evangelism, but soon developed into a more permanent organism of inter-relation.

The doctrinal position of the Assemblies of God is framed in a classical Pentecostal and an evangelical context. The AG is Trinitarian and holds the Bible as divinely inspired and the infallible authoritative rule of faith and conduct. Baptism by immersion is practiced as an ordinance instituted by Christ for those who have been saved. Baptism is understood as an outward sign of an inward change, the change from being dead in sin to being alive in Christ. As an ordinance, Communion is also practiced. The AG believe that the elements that are partaken are symbols expressing the sharing of the divine nature of Jesus of Nazareth; a memorial of His suffering and death; and a prophecy of His second coming. The Assemblies of God also places a strong emphasis on the fulfillment of the Great Commission and believes that this is the calling of the church. [14]

While the World AG Fellowship has a statement of faith which outlines the basic beliefs which unify the various branches of the movement, each national AG denomination formulates its own doctrinal statements. The Assemblies of God USA, for example, adheres to the Statement of Fundamental Truths.

The most prominent politician within the Assemblies of God is the Australian prime minister Scott Morrison. He stated "the Bible is not a policy handbook, and I get very worried when people try to treat it like one". [15] In late 2017, Morrison stated that he would become a stronger advocate for protections for religious freedom.

In Brazil, the local branch Assembleias de Deus has, although representing only a minor part of the population, increasing influence on politics. The christian fundamentalist party Patriota is in a parliamental coalition with the Bolsonaro government as well as the far-right Partido Social Cristão, which is led by the two AoG pastors Everaldo Pereira and Marco Feliciano, who are known for their involvement in various cases of crime and sexual misconducts. [16] [17] [18] Another Brazilian politician and AoG member, Marina Silva, pursues ecologist ideas and supports the right of the indigene tribes of her country. Silva has been at times criticized by the church leadership for her leftist stance on many issues such as drug reform. [19]

The World Fellowship unites Assemblies of God national councils from around the world together for cooperation. Each national council is fully self-governing and independent and involvement with the World Fellowship does not limit this independence. The work of the World Fellowship is carried out by the Executive Council. Executive Council members represent different regions of the world and serve three-year terms. Africa, Asia Pacific, Latin America/Caribbean, and North America each have four representatives while Europe has three and the Middle East and Southern Asia each have one. They are elected by the General Assembly. Each World Fellowship member is entitled to send one or more delegates to the General Assembly with one vote. The General Assembly also elects the Chairman, Vice Chairman, and Secretary of the World Fellowship. [1] The World Assemblies of God Relief Agency (WAGRA) directs its humanitarian work. [20] At the national and lower levels, the Assemblies of God are generally structured around a form of presbyterian polity, combining the independence of the local church with oversight by district and national councils. [5]

The Assemblies of God has missions programs that are designed to establish self-propagating, self-supporting, and self-governing national church bodies in every country. As of late 2006, the Assemblies of God World Missions Research Office reported constituencies in 212 countries and territories, with over 5,000 adherents added per day. [21] As of 2005, the fellowship operated 859 Bible schools, 1,131 extension programs and 39 seminaries outside the United States. [22] 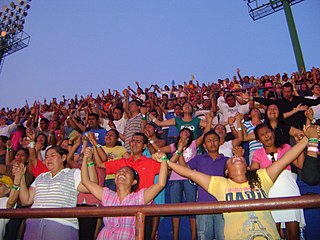 Pentecostalism or Classical Pentecostalism is a Protestant Christian movement that emphasises direct personal experience of God through baptism with the Holy Spirit. The term Pentecostal is derived from Pentecost, the Greek name for the Jewish Feast of Weeks. For Christians, this event commemorates the descent of the Holy Spirit upon the followers of Jesus Christ, as described in the second chapter of the Acts of the Apostles.

Oneness Pentecostalism is a movement within the Christian family of churches known as Pentecostalism. It derives its distinctive name from its teaching on the Godhead, which is popularly referred to as the "Oneness doctrine," a form of Modalistic Monarchianism. This doctrine states that there is one God, a singular divine Spirit, who manifests himself in many ways, including as Father, Son, and Holy Ghost.

The Church of God, Mountain Assembly (CGMA) is a holiness Pentecostal Christian body formed in 1906, with roots in the late 19th-century American holiness movement and early 20th-century Pentecostal revival. The denomination maintains headquarters in Jellico, Tennessee and is a member of the Pentecostal/Charismatic Churches of North America.

The Pentecostal World Fellowship is a fellowship of Evangelical Pentecostal churches and denominations from across the world. The headquarters is in Tulsa, Oklahoma. Its leader is Dr. William Wilson.

The Pentecostal Assemblies of Canada (PAOC) is a Pentecostal Christian denomination and the largest evangelical church in Canada. It reports 239,267 adherents and 1,076 member congregations throughout Canada. Its headquarters is located in Mississauga, Ontario.

Pentecostalism has grown in India since its introduction in the early twentieth century. Several Pentecostal missionaries who had participated in the Azusa Street Revival visited Kerala from 1909 onwards. During the 1920s the missionary Robert F. Cook established the Indian branch of the Church of God, based in Kerala. Two other churches founded around this time were The Pentecostal Mission, founded in Sri Lanka by the Indian evangelist Pastor Paul, and later brought to India; and the Indian Pentecostal Church of God, set up by K.E. Abraham after he split from the church founded by Cook. A later foundation, in 1953, was the Sharon Fellowship, which runs the Sharon Women's Bible College. Many of the Pentecostal churches in India are represented in the Assemblies of God in India.

The Indian Pentecostal Church of God (IPC) is the largest Pentecostal organisation in India. It had over ten thousand congregations around the world. Its organisational headquarters is at Hebronpuram, Kumbanadu, Kerala, India. Unlike their counterpart, the Assemblies of God, IPC churches stresses on firm evangelical doctrines and forbids new age charismatic movements and strictly condemns prosperity gospel and free grace theology. IPC also distances itself from TPM, which according to IPC is a heretical movement.

The Apostolic Faith Mission of South Africa (AFM) is a classical Pentecostal Christian denomination in South Africa. With 1.2 million adherents, it is South Africa's largest Pentecostal church and the fifth largest religious grouping in South Africa representing 7.6 percent of the population. Dr. Isak Burger has led the AFM as president since 1996 when the white and black branches of the church were united. It is a member of the Apostolic Faith Mission International, a fellowship of 23 AFM national churches. It is also a member of the South African Council of Churches.

The Australian Christian Churches (ACC) is the World Assemblies of God Fellowship in Australia and has the largest Pentecostal following in the country with over 375,000 adherents. The ACC is the fourth most attended church denomination in Australia having over 1,100 congregations across the country.

The New Zealand Samoan Assemblies of God (SA/G) or (SAOG), officially The General Council of the Samoan Assemblies of God in New Zealand Inc. are a group of Pentecostal congregations predominantly made up of Samoan people. It was established in New Zealand in the early 1960s by a group of Holiness/Pentecostals from Samoa bringing the message of Pentecostalism to their Samoan people living in New Zealand. Certain pioneers such as the late Reverend Makisua Fatialofa with his wife Evangelist Mauosamoa, the late Reverend Dr. Samani Pulepule with the late First Lady Sapapalii, along with the late Reverend Fereti Ama with his wife Lady Leausuone, were the foundation members of the first ethnically fellowship to align itself with the Assemblies of God in New Zealand (A/GNZ). It was this Samoan fellowship that contributed to the growth of the Assemblies of God in New Zealand making it the Nations fastest growing church. By 2005 there were 89 SA/G congregations throughout New Zealand and in that same year some members in the Samoan fellowship felt the need to be a self-governing body and formed its own constitution which split the SA/GNZ national body in two. In late November 2005, 45 churches left the A/GNZ umbrella and formed a break-away group, while 40 churches remained under the A/GNZ movement, although this was the end result both Samoan fellowships still work alongside one another.

Pentecostalism is a renewal movement within Protestant Christianity that places special emphasis on a direct personal experience of God through the baptism with the Holy Spirit. For Christians, this event commemorates the descent of the Holy Spirit upon the followers of Jesus Christ, as described in the second chapter of the Book of Acts. Pentecostalism was established in Kerala at the start of the 20th century.

The Apostolic Church - Ghana is a denomination emanating from the Pentecostal Movement which started from the 1904–1905 Welsh Revival. It practices self-governing and claims to own local churches in every District in Ghana and Foreign Mission Fields with its Headquarters in Accra, Ghana. The church is firmly identified as a Pentecostal, Trinitarian, Evangelical and Bible-believing church.