Christian tradition is a collection of traditions consisting of practices or beliefs associated with Christianity. These ecclesiastical traditions have more or less authority based on the nature of the practices or beliefs and on the group in question. Many churches have traditional practices, such as particular patterns of worship or rites, that developed over time. Deviations from such patterns are sometimes considered unacceptable or heretical. There are certain Christian traditions that are practiced throughout the liturgical year, such as praying a daily devotional during Advent, erecting a nativity scene during Christmastide, chalking the door on Epiphany Day, fasting during Lent, waving palms on Palm Sunday, eating easter eggs during Eastertide, and decorating the church in red on Pentecost. [1] [2]

Tradition also includes historic teaching of the recognized church authorities, such as Church Councils and ecclesiastical officials (e.g., the Pope, Patriarch of Constantinople, Archbishop of Canterbury, etc.), and includes the teaching of significant individuals like the Church Fathers, the Protestant Reformers, and the founders of denominations. Many creeds, confessions of faith, and catechisms generated by these bodies, and individuals are also part of the traditions of various bodies.

The Catholic, Eastern Orthodox, Oriental Orthodox and Persian churches distinguish between what is called Apostolic or sacred tradition and ecclesiastical traditions. In the course of time ecclesial traditions develop in theology, discipline, liturgy, and devotions. These the Church may retain, modify or even abandon. [3] Apostolic tradition, on the other hand, is the teaching that was handed down by the Apostles by word of mouth, by their example and "by the institutions they established", among which is the apostolic succession of the bishops: "this living transmission, accomplished in the Holy Spirit, is called Tradition". [4] "And [Holy] Tradition transmits in its entirety the Word of God, which has been entrusted to the apostles by Christ the Lord and the Holy Spirit." [5]

Prima scriptura is upheld by the Anglican and Methodist traditions of Christianity, which teach that Scripture is the primary source for Christian doctrine, but that "tradition, experience, and reason" can subordinately inform Christian practice as long as they are in harmony with the Bible. [6] [7] In Methodism, sacred tradition refers to "church’s consensual interpretation of the Bible" and in view of the prima scriptura perspective, informs doctrine, such as that regarding infant baptism for example, in which Methodist teaching appeals to Scripture chiefly, along with the teachings of the Church Fathers and early Methodist divines for support of the practice. [8]

In his book, James F. Keenan reports studies by some Catholic academics. A study by Bernard Hoose states that claims to a continuous teaching by the Church on matters of sexuality, life and death and crime and punishment are "simply not true". After examining seven medieval texts about homosexuality, Mark Jordan argues that, "far from being consistent, any attempt to make a connection among the texts proved impossible". He calls the tradition's teaching of the Church "incoherent". Karl-Wilhelm Merks considers that tradition itself is "not the truth guarantor of any particular teaching." Keenan, however, says that studies of "manualists" such as John T. Noonan Jr. has demonstrated that, "despite claims to the contrary, manualists were co-operators in the necessary historical development of the moral tradition." Noonan, according to Keenan, has provided a new way of viewing at "areas where the Church not only changed, but shamefully did not". [10]

In the Catholic Church and Eastern Orthodoxy, sacred tradition, but not "ecclesial traditions", is considered official doctrine and of equal authoritative weight to the Bible. In the Anglican and Methodist traditions, sacred tradition, along with reason and experience, inform Christian practice at a level subordinate to Sacred Scripture (see prima scriptura ). [6] Among the Lutheran and Reformed traditions of Christianity, the Bible itself is the only final authority (see sola scriptura ), but tradition still plays an important supporting role. [6] All three groups generally accept the traditional developments on the doctrine of the Trinity, for instance, and set bounds of orthodoxy and heresy based on that tradition. They also have developed creedal and confessional statements which summarize and develop their understanding of biblical teaching. 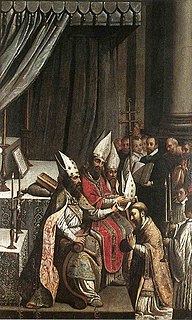 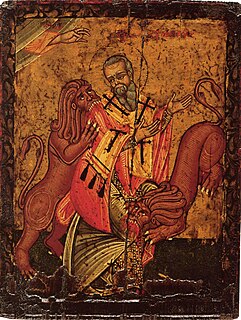 The word catholic comes from the Greek phrase καθόλου katholou 'on the whole, according to the whole, in general', and is a combination of the Greek words κατά 'about' and ὅλος 'whole'. The first known use of "Catholic" was by the church father Saint Ignatius of Antioch in his Letter to the Smyrnaeans. In the context of Christian ecclesiology, it has a rich history and several usages.

Sola scriptura, meaning by scripture alone, is a Christian theological doctrine held by most Protestant Christian denominations, in particular the Lutheran and Reformed traditions of Protestantism, that posits the Bible as the sole infallible source of authority for Christian faith and practice. The Catholic Church considers it heterodox and generally the Orthodox churches consider it to be contrary to the 'phronema' of the Church.

The five solae of the Protestant Reformation are a foundational set of Christian theological principles held by theologians and clergy to be central to the doctrines of justification and salvation as taught by the Reformed and Lutheran branches of Protestantism and Pentecostalism. Each sola represents a key belief in these Protestant traditions in contradistinction to the theological doctrine of the Catholic Church, although they were not assembled as a theological unit until the 20th century. The Reformers are known to have only clearly stated two of the five solae. Even today there are differences as to what constitutes the solae and how many there are, not to mention how to interpret them to reflect the Reformers' beliefs.

Sacred tradition is a theological term used in Christian theology. According to the theology of the Catholic, Eastern Orthodox, Oriental Orthodox and Assyrian churches, sacred tradition is the foundation of the doctrinal and spiritual authority of Christianity and of the Bible. Thus, the Bible must be interpreted within the context of sacred tradition and within the community of the church. The Anglican and Methodist churches regard tradition, reason, and experience as sources of authority but as subordinate to scripture – a position known as prima scriptura. That is in contrast to the Lutheran and Reformed traditions, which teach that the Bible alone is a sufficient/infallible basis for all Christian teaching – a position known as sola scriptura.

In Christian communities, Bible study is the study of the Bible by people as a personal religious or spiritual practice. In many Christian traditions, Bible study, coupled with Christian prayer, is known as doing devotions or devotional acts. Many Christian churches schedule time to engage in Bible study collectively. The origin of Bible study groups has its origin in early Christianity, when Church Fathers such as Origen and Jerome taught the Bible extensively to disciple Christians. In Christianity, Bible study has the purpose of "be[ing] taught and nourished by the Word of God" and "being formed and animated by the inspirational power conveyed by Scripture".

Prima scriptura is the Christian doctrine that canonized scripture is "first" or "above all" other sources of divine revelation. Implicitly, this view suggests that, besides canonical scripture, there can be other guides for what a believer should believe and how they should live, such as the Holy Spirit, created order, traditions, charismatic gifts, mystical insight, angelic visitations, conscience, common sense, the views of experts, the spirit of the times or something else. Prima scriptura suggests that ways of knowing or understanding God and his will that do not originate from canonized scripture are perhaps helpful in interpreting that scripture, but testable by the canon and correctable by it, if they seem to contradict the scriptures. Prima sciptura is upheld by the Anglican, Methodist and Pentecostal traditions of Christianity, which suggest that Scripture is the primary source for Christian doctrine, but that "tradition, experience, and reason" can nurture the Christian religion as long as they are in harmony with the Bible.

The rule of faith is the name given to the ultimate authority or standard in religious belief. It was used by Early Christian writers such as Tertullian. The phrase is sometimes used for early creeds.

Catechesis is basic Christian religious education of children and adults, often from a catechism book. It started as education of converts to Christianity, but as the religion became institutionalized, catechesis was used for education of members who had been baptized as infants. As defined in the Catechism of the Catholic Church, paragraph 5 :

Catechesis is an education in the faith of children, young people and adults which includes especially the teaching of Christian doctrine imparted, generally speaking, in an organic and systematic way, with a view to initiating the hearers into the fullness of Christian life.

Lex orandi, lex credendi, sometimes expanded as Lex orandi, lex credendi, lex vivendi, is a motto in Christian tradition, which means that prayer and belief are integral to each other and that liturgy is not distinct from theology. It refers to the relationship between worship and belief. As an ancient Christian principle it provided a measure for developing the ancient Christian creeds, the canon of scripture, and other doctrinal matters. It is based on the prayer texts of the Church, that is, the Church's liturgy. In the Early Church, there was liturgical tradition before there was a common creed, and before there was an officially sanctioned biblical canon. These liturgical traditions provided the theological framework for establishing the creeds and canon.

The Four Marks of the Church, also known as the Attributes of the Church, describes four distinctive adjectives of traditional Christian ecclesiology as expressed in the Niceno-Constantinopolitan Creed completed at the First Council of Constantinople in AD 381: "[We believe] in one, holy, catholic, and apostolic Church."

Protestantism is a form of Western Christianity that follows the theological tenets of the Protestant Reformation: a movement within Western Christianity that began seeking to reform the Catholic Church from within in the 16th century against what its followers perceived to be errors, abuses, innovations, discrepancies, and theological novums developing within the Catholic Church.

Catholic–Protestant relations refers to the social, political and theological relations and dialogue between the Catholics and Protestants.