A full-time job is employment in which workers work a minimum number of hours defined as such by their employer.

Full-time employment often comes with benefits that are not typically offered to part-time, temporary, or flexible workers, such as annual leave, sick leave, and health insurance. Part-time jobs are mistakenly thought by some to not be careers. However, legislation exists to stop employers from discriminating against part-time workers so this should not be a factor when making decisions on career advancement. They generally pay more than part-time jobs per hour, and this is similarly discriminatory if the pay decision is based on part-time status as a primary factor. The Fair Labor Standards Act (FLSA) does not define full-time employment or part-time employment. This is a matter generally to be determined by the employer (US Department of Labor). The definition by the employer can vary and is generally published in a company's Employee Handbook. Companies commonly require from 32 to 40 hours per week to be defined as full-time and therefore eligible for benefits.

Full-time status varies between company and is often based on the shift the employee must work during each workweek. The "standard" work week consists of five eight-hour days, commonly served between 9:00 AM to 5:00 PM or 10:00 AM to 6:00 PM totaling 40 hours. While a four-day week generally consists of four ten-hour days, it may also consist of as little as nine hours for a total of a 36-hour workweek. Twelve-hour shifts are often three days per week, unless the company has the intention of paying out the employee overtime. Overtime is legally paid out anytime an employee works more than 40 hours per week. The legal minimum for overtime starts at Base Pay + One-Half. The increased payout is considered to compensate slightly for the increased fatigue which a person experiences on such long shifts. Shifts can also be very irregular, as in retail, but are still full-time if the required number of hours is reached. There are some situations where a person who needs full-time work is dropped to part-time, which is sometimes a form of constructive dismissal to avoid paying unemployment benefits to a laid-off worker.

A person working more than full-time is working overtime, and may be entitled to extra per-hour wages (but not salary). [17]

“Full-time” can also be used in reference to a student (usually in higher education) who takes a full load of course work each academic term. The distinction between a full-time and part-time student varies markedly from country to country. As an example, in the United States a student is commonly defined as being in full-time education when they undertake 12 or more credit hours. This translates to 12 "hours" (often of 50 minutes instead of 60 minutes each) in class per week. "Lab hours" often count for less, only as one-half or one-third of a credit hour.

International students must maintain full-time status for student visas. [18] Adult students (typically up to age 22 or 23) may also fall under their parents' health insurance (and possibly car insurance and other services) if they are full-time, except for one term per year (usually summer). Students may also be eligible for elected office in student government or other student organizations only if they are full-time. The Department of Labor has a full-time student program which allows employers to pay no less than 85% of the minimum wage to the student/employee. [19]

Look up full-time job in Wiktionary, the free dictionary.

The 35-hour working week is a part of a labour law reform adopted in France in February 2000, under Prime Minister Lionel Jospin's Plural Left government. Pushed by Minister of Labour Martine Aubry, it was adopted in two phases: the "Aubry 1" law in June 1998 and "Aubry 2" law in January 2000. The previous legal working week was 39 hours, established by President François Mitterrand, also a member of the Socialist Party. The 35-hour working week had been on the Socialist Party's 1981 electoral program, titled 110 Propositions for France, but was not pursued because of the poor economic state. 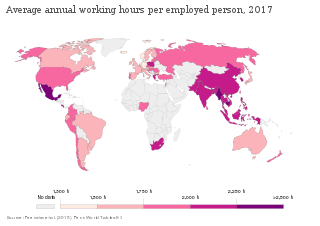 Working time is the period of time that a person spends at paid labor. Unpaid labor such as personal housework or caring for children or pets is not considered part of the working week.

A salary is a form of periodic payment from an employer to an employee, which may be specified in an employment contract. It is contrasted with piece wages, where each job, hour or other unit is paid separately, rather than on a periodic basis. From the point of view of running a business, salary can also be viewed as the cost of acquiring and retaining human resources for running operations, and is then termed personnel expense or salary expense. In accounting, salaries are recorded in payroll accounts.

The Equal Pay Act of 1963 is a United States labor law amending the Fair Labor Standards Act, aimed at abolishing wage disparity based on sex. It was signed into law on June 10, 1963, by John F. Kennedy as part of his New Frontier Program. In passing the bill, Congress stated that sex discrimination:

The weekdays and weekend are the complementary parts of the week devoted to labour and rest, respectively. The legal weekdays, or workweek, is the part of the seven-day week devoted to working. In most of the world, the workweek is from Monday to Friday and the weekend is Saturday and Sunday. A weekday or workday is any day of the working week. Other institutions often follow this pattern, such as places of education. The constituted weekend has varying definitions, based on determined calendar days, designated period of time, and/or regional definition of the working week. Sometimes the term "weekend" is expanded to include the time after work hours on the last workday of the week.

Many both in and outside Japan share an image of the Japanese work environment that is based on a "simultaneous recruiting of new graduates" and "lifetime-employment" model used by large companies as well as a reputation of long work-hours and strong devotion to one's company. This environment is said to reflect economic conditions beginning in the 1920s, when major corporations competing in the international marketplace began to accrue the same prestige that had traditionally been ascribed to the daimyō–retainer relationship of feudal Japan or government service in the Meiji Restoration.

Anderson v. Mt. Clemens Pottery Co., 328 U.S. 680 (1946), is a decision by the US Supreme Court that held that preliminary work activities, if controlled by the employer and performed entirely for the employer's benefit, are properly included as working time under Fair Labor Standards Act. The decision is known as the "portal to portal case."

Overtime rate is a calculation of hours worked by a worker that exceed those hours defined for a standard workweek. This rate can have different meanings in different countries and jurisdictions, depending on how that jurisdiction's labor law defines overtime. In many jurisdictions, additional pay is mandated for certain classes of workers when this set number of hours is exceeded. In others, there is no concept of a standard workweek or analogous time period, and no additional pay for exceeding a set number of hours within that week.

The Fair Labor Standards Act of 1938 29 U.S.C. § 203 (FLSA) is a United States labor law that creates the right to a minimum wage, and "time-and-a-half" overtime pay when people work over forty hours a week. It also prohibits employment of minors in "oppressive child labor". It applies to employees engaged in interstate commerce or employed by an enterprise engaged in commerce or in the production of goods for commerce, unless the employer can claim an exemption from coverage. The Act was enacted by the 75th Congress and signed into law by President Franklin D. Roosevelt in 1938.

The Wage and Hour Division (WHD) of the United States Department of Labor is the federal office responsible for enforcing federal labor laws. The Division was formed with the enactment of the Fair Labor Standards Act of 1938. The Wage and Hour mission is to promote and achieve compliance with labor standards to protect and enhance the welfare of the Nation's workforce. WHD protects over 144 million workers in more than 9.8 million establishments throughout the United States and its territories. The Wage and Hour Division enforces over 13 laws, most notably the Fair Labor Standards Act and the Family Medical Leave Act. In FY18, WHD recovered $304,000,000 in back wages for over 240,000 workers and followed up FY19, with a record-breaking $322,000,000 for over 300,000 workers.

Wage theft is the failing to paying of wages or providing of employee benefits rightfully owed to an employee by contract or law. It can be conducted by employers in various ways, among them failing to pay overtime; violating minimum-wage laws; the misclassification of employees as independent contractors, illegal deductions in pay; forcing employees to work "off the clock", not paying annual leave or holiday entitlements, or simply not paying an employee at all.

Turkish labour law provides a number of protections to employees, governed by the Labor Code, Trade Union Law, and the Constitution.

Overwork is the expression used to define the cause of working too hard, too much, or too long. It can be also related to the act of working beyond one's strength or capacity, causing physical and/or mental distress in the process.

Israeli labor law provides a number of protections to workers in Israel. They are governed by the Basic Laws, the Hours of Work and Rest Law, as well as various other laws, statutes, and regulations.

California's Assembly Bill 1066, Phase-In Overtime for Agricultural Workers Act of 2016, was authored by Assemblymember Lorena Gonzalez Fletcher and was signed by Governor Jerry Brown on September 12, 2016. This bill allows farmworkers in California to qualify for overtime pay after working 8 hours in a single day or 40 hours in a workweek. Prior to the passage of AB 1066, farmworkers were only eligible for overtime pay after working 10 hours.