Packages are most typically offered for employees who are laid off or retire. Severance pay was instituted to help protect the newly unemployed. Sometimes, they may be offered for those who either resign, regardless of the circumstances, or are fired. Policies for severance packages are often found in a company's employee handbook. Severance contracts often stipulate that employees will not sue the employer for wrongful dismissal or attempt to collect on unemployment benefits, and that if they do so, they must return the severance money.

Severance packages vary by country depending on government regulation.

In the United States, there is no requirement in the Fair Labor Standards Act (FLSA) for severance pay. Instead it is a matter of agreement between employers and employees.

Severance agreements, among other things, could prevent an employee from working for a competitor and waive any right to pursue a legal claim against the former employer. Also, an employee may be giving up the right to seek unemployment compensation. An employment attorney may be contacted to assist in the evaluation and review of a severance agreement. The payments in some cases will continue only until the former employee has found another job.

In February 2010, a ruling in the Western District of Michigan held that severance pay is not subject to FICA taxes, but it was overturned by the Supreme Court in March 2014. [2]

Employers are required to pay severance pay after an employee working in Puerto Rico is terminated. [3] [4] Employees are not permitted to waive this payment. [5] Severance pay is not required if the employee was terminated with "just cause." [4]

Just cause is satisfied in any of the following situations: the employee had a pattern of improper or disorderly conduct; the employee worked inefficiently, belatedly, negligently, poorly; the employee repeatedly violated the employer's reasonable and written rules; the employer had a full, temporary, or partial closing of operations; the employer had technological or reorganization changes, changes in the nature of the product made, and changes in services rendered; or the employer reduced the number of employees because of an actual or expected decrease in production, sales, or profits. [6]

Severance agreements are also more than just a "thank you" payment from an employer in Canada. The amount of severance pay an employee is owed when dismissed without misconduct varies between common law (judge-made law) and employment law.

There is a severance pay calculator based on common law "Bardal Factors" that predicts the amount of severance pay owed as determined by the court [14] . The goal is to provide enough notice or pay in lieu for the employee to find comparable employment. Unlike statutory minimum notice, the courts will award much more than 8 weeks if warranted by the circumstances, with over 24 months worth of pay in damages possible. Other factors considered may include:

The biggest factor in determining severance is re-employability. If someone is in a field or market where they will have great difficulty finding work, the court will provide more severance. The reason being that the primary purpose of severance is to provide the wrongfully dismissed employee the opportunity to secure other employment within the period provided. [16] [17] See also Canada section in Wrongful dismissal for related litigation cases in Canada.

Dismissal with cause and termination without cause

In Canadian common law, there is a basic distinction as to dismissals. There are two basic types of dismissals, or terminations: dismissal with cause (Just cause) [18] and termination without cause. An example of cause would be an employee's behavior which constitutes a fundamental breach of the terms of the employment contract. Where cause exists, the employer can dismiss the employee without providing any notice. If no cause exists yet the employer dismisses without providing lawful notice, then the dismissal is a wrongful dismissal.

There is a time limit of two years from the date of termination for suing the employer in Ontario. This Litigation follows Civil_procedure_in_Canada#Ontario. Before starting a court case, [19] there are other options, [20] such as, Negotiation, Mediation, and Arbitration.

Typically in a civil lawsuit, in 2019, it can cost $1,500-$5,000 to initiate an action and have a lawyer deliver a Statement of Claim. Responding to the opposing side’s documents and conducting examinations for discovery will likely involve another $3,500-$5,000. The preparation and presentation of your case at trial is likely to add another $5,000—$15,000 to your legal costs. [21] These legal expense is income tax deductible. [22]

There are free Legal information and referral services offered on a confidential basis funded from government(The Access to Justice Fund [23] ) for all areas of law in major cities, such as, Ottawa Legal Information Centre. [24]

In the United Kingdom Labour Law provides for Redundancy Pay. [25] The maximum amount of statutory redundancy pay is £15,240. [26]

In Italy, severance pay (TFR) is provided in all cases of termination of the employment relationship, for whatever reason: individual and collective dismissal, resignation, etc. The law recognizes subordinate workers the right to receive severance pay, pursuant to article 2120 of the civil code. [27]

Where any employee obtains lump-sum compensation income (including economic compensation, living allowances and other subsidies granted by an employer) from the employer's termination of labor relationship with him/her, the part of the income which is no more than three times the average wage amount of employees in the local area in the previous year shall be exempt from individual income tax.

The fraction of the compensation that exceeds 3 times the local annual average salary shall be taxed as individual income tax as follows For those employees receiving a lump sum compensation, the lump sum can be considered as receiving monthly salaries in one time, and shall be allocated to a certain period in average amount. This average amount will be calculated dividing the lump sum by the service years with the current employer, and will be taxed as monthly salaries. For the number of service years with the current employer, the actual number of years should be considered. If the number of years is more than 12, only 12 will be considered.

At-will employment is a term used in U.S. labor law for contractual relationships in which an employee can be dismissed by an employer for any reason, and without warning, as long as the reason is not illegal. When an employee is acknowledged as being hired "at will," courts deny the employee any claim for loss resulting from the dismissal. The rule is justified by its proponents on the basis that an employee may be similarly entitled to leave his or her job without reason or warning. The practice is seen as unjust by those who view the employment relationship as characterized by inequality of bargaining power.

A layoff is the temporary suspension or permanent termination of employment of an employee or, more commonly, a group of employees for business reasons, such as personnel management or downsizing an organization. Originally, layoff referred exclusively to a temporary interruption in work, or employment but this has evolved to a permanent elimination of a position in both British and US English, requiring the addition of "temporary" to specify the original meaning of the word. A layoff is not to be confused with wrongful termination. Laid off workers or displaced workers are workers who have lost or left their jobs because their employer has closed or moved, there was insufficient work for them to do, or their position or shift was abolished. Downsizing in a company is defined to involve the reduction of employees in a workforce. Downsizing in companies became a popular practice in the 1980s and early 1990s as it was seen as a way to deliver better shareholder value as it helps to reduce the costs of employers. Indeed, recent research on downsizing in the US, UK, and Japan suggests that downsizing is being regarded by management as one of the preferred routes to help declining organizations, cutting unnecessary costs, and improve organizational performance. Usually a layoff occurs as a cost-cutting measure. 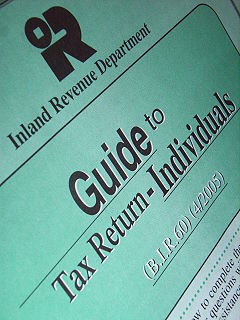 Salaries tax is a type of income tax that is levied in Hong Kong, chargeable on income from any office, employment and pension for a year of assessment arising in or derived from the territory. For purposes of calculating liability, the period of assessment is from April 1 to March 31 of the following year.

Employee exit management or offboarding describes the consciously designed separation process when an employee leaves the company, for which they have previously worked within the scope of a work or service contract. It deals with the formal processes revolving around an employee's exit from an organization either through voluntary resignation, layoffs or termination.

Iranian labour law describes the rules of employment in Iran. As a still developing country, Iran is considerably behind by international standards. It has failed to ratify the two basic Conventions of the International Labour Organization on freedom of association and collective bargaining, and one on abolition of child labour. Countries such as the US and India have also failed to ratify many of these Conventions and a mere 14 other Conventions, only 2 since the Islamic Revolution.

Re Rizzo & Rizzo Shoes Ltd is a 1998 judgment from the Supreme Court of Canada regarding the priority of employees interests when a company declares bankruptcy. The judgment hinged on the interpretation of the Employment Standards Act and has been taken to mark the Supreme Court of Canada's adoption of the purposive approach to legislative interpretation. It has since been frequently cited in subsequent decisions of Canadian courts, nearly every time legislation is interpreted.

Honda Canada Inc v Keays2008 SCC 39, [2008] 2 SCR 362 is a leading case of the Supreme Court of Canada that has had significant impact in Canadian employment law, in that:

Labour law regulates the legal relationship in Bulgaria between individual workers and employees as well as between coalitions and representative bodies.

Unemployment benefits in the United States vary by state.

Commonwealth Bank of Australia v Barker is a leading Australian judgment of the High Court which unanimously and firmly rejected the proposition that contracts of employment in Australia should contain an implied term of mutual trust and confidence.

Legislation relating to employment in the Republic of Ireland governs the provision and content of the contract of employment, payment of wages, length of the working day and working week, and dismissal procedures.