Last updated May 20, 2022
Agreement providing significant compensation if someone is fired, such as due to a merger
For the CSI: Miami episode, see Golden Parachute (CSI episode).

A golden parachute is an agreement between a company and an employee (usually an upper executive) specifying that the employee will receive certain significant benefits if employment is terminated. These may include severance pay, cash bonuses, stock options, or other benefits. Most definitions specify the employment termination is as a result of a merger or takeover, [1] [2] [3] also known as "change-in-control benefits", [4] but more recently the term has been used to describe perceived excessive CEO (and other executive) severance packages unrelated to change in ownership (also known as a golden handshake). [5]

The first use of the term "golden parachute" is credited to a 1961 attempt by creditors to oust Howard Hughes from control of Trans World Airlines. The creditors provided Charles C. Tillinghast Jr. an employment contract that included a clause that would pay him money if he lost his job. [6]

The use of golden parachutes expanded greatly in the early 1980s in response to the large increase in the number of takeovers and mergers. American executive pay practices were subject to increasing public scrutiny in the 1980’s. During the 1980’s hostile takeover wave, the practice of using golden parachutes in an executive's compensation package began to spread rapidly. [7] By 1981, some 15% of the 250 largest U.S. corporations had golden parachutes in place. [8]

News reference volume of the term "golden parachute" spiked in late 2008 during the global economic recession, and 2008 US presidential debates. [9] Despite the poor economy, in the two years before 2012 a study by the professional services firm Alvarez & Marsal found a 32% increase in the value of "change-in-control benefits" provided to US executives. [4] In late 2011, USA Today reported several CEO retirement packages in excess of $100 million, "raising eyebrows even among those accustomed to oversized payouts". [5]

In the 1980s, golden parachutes prompted shareholder suits challenging the parachutes' validity, SEC "termination agreement disclosure rules" in 1986, and provisions in the Deficit Reduction Act of 1984 aimed at limiting the size of future parachutes [10] with a special tax on payouts that topped three times annual pay. [11] In the 1990s in the United States, some government efforts were made to diminish "change-in-control benefits". As of 1996, Section 280G of the Internal Revenue Code denies a corporation a deduction for any excess "parachute payment" made to a departing employee, and Section 4999 imposes on the recipient a nondeductible 20% excise tax, in addition to regular income and Social Security taxes. [12]

The 2010 United States Dodd-Frank Act includes in its provisions a mandate for shareholder votes on any future adoption of a golden parachute by publicly traded firms. [13] In Switzerland, a referendum which "would give shareholders the power to veto executive pay plans, including golden parachutes" was put to a vote on March 3, 2013. [14] Voters approved measures limiting CEO pay and outlawing golden parachutes. [15]

"Gratuitous" payments made to CEOs on agreeing to have their companies acquired (i.e. payments made to CEOs by the acquiring company not mandated under the CEO's contract at the time the company is acquired) have been criticized. A "prominent" mergers and acquisitions lawyer told the New York Times that "I have had a number of situations where we've gone to management looking to do a deal and been stopped at the door until a compensation arrangement was signed, sealed, and delivered." Another lawyer told the Times: "Publicly, we have to call these things retention bonuses. Privately, sometimes it's the only way we would have got the deal done. It's a kickback." [16] [17]

A study investigating acquirer-paid sweeteners at 311 large-firm acquisitions completed between 1995 and 1997 found that CEOs of the acquired companies accept lower acquisition premiums when the acquirer promised them a high-ranking managerial post after the acquisition. [17] [18]

Golden parachutes are often viewed as excessive due to the substantial payouts given to senior management after an acquisition. This is further seen as excessive because other stakeholders during these acquisitions can be subject to layoffs. Golden parachutes can preserve a firms value for all stakeholders and are set in place to protect CEO’s during potential takeover situations. [19]

On June 24, 2013, The Wall Street Journal reported that McKesson Corporation chairman and CEO John Hammergren's pension benefits of $159 million had set a record for "the largest pension on file for a current executive of a public company, and almost certainly the largest ever in corporate America." A study in 2012 by GMI Ratings, which tracks executive pay, found that 60% of CEOs at S&P 500 companies have pensions, and their value averages $11.5 million. [20]

On June 29, 2013, The New York Times reported on research findings suggesting that "despite years of public outcry against such deals, multimillion-dollar severance packages are still common", and they continue to become "more complex and opaque". [21]

Arguments for and against

Proponents of golden parachutes argue that the parachutes provide benefits to stockholders:

While critics have pointed out that:

A golden handshake is a clause in an executive employment contract that provides the executive with a significant severance package in the case that the executive loses their job through firing, restructuring, or even scheduled retirement. This can be in the form of cash, equity, and other benefits, and is often accompanied by an accelerated vesting of stock options. According to Investopedia, a golden handshake is similar to, but more generous than a golden parachute because it not only provides monetary compensation and/or stock options at the termination of employment, but also includes the same severance packages executives would get at retirement.

An agency cost is an economic concept that refers to the costs associated with the relationship between a "principal", and an "agent". The agent is given powers to make decisions on behalf of the principal. However, the two parties may have different incentives and the agent generally has more information. The principal cannot directly ensure that its agent is always acting in its best interests. This potential divergence in interests is what gives rise to agency costs.

A pension parachute is a form of poison pill that prevents the raiding firm of a hostile takeover from utilizing the pension assets to finance the acquisition. When the target firm is threatened by an acquirer, the pension plan assets are only available to benefit the pension plan participants.

Kleinwort Benson was a leading investment bank that offered a wide range of financial services from offices throughout the United Kingdom and Channel Islands. Two families, the Kleinworts and the Bensons, founded two different merchant banks in London. They merged in 1961 to create Kleinwort Benson Lonsdale, later Kleinwort Benson. Following its acquisition by Société Générale in June 2016, it was merged with SG Hambros, already a subsidiary of Société Générale, to form Kleinwort Hambros in November 2016.

Management is a type of labor with a special role of coordinating the activities of inputs and carrying out the contracts agreed among inputs, all of which can be characterized as "decision making". Managers usually face disciplinary forces by making themselves irreplaceable in a way that the company would lose without them. A manager has an incentive to invest the firm's resources in assets whose value is higher under him than under the best alternative manager, even when such investments are not value-maximizing.

Say on pay is a term used for a role in corporate law whereby a firm's shareholders have the right to vote on the remuneration of executives.

Melrose Industries plc is a British manufacturing company that specialises in buying, investing in, and divesting engineering companies. Its shares are listed on the London Stock Exchange as a constituent of the FTSE 100 Index. Melrose serves customers in the United Kingdom and United States.

Sanjay Kumar Jha is an Indian-American business executive. He is the former chief executive officer (CEO) of GlobalFoundries and former chairman and CEO of Motorola Mobility. Prior to that, he was the chief operating officer of Qualcomm.

Executive compensation is composed of both the financial compensation and other non-financial benefits received by an executive from their employing firm in return for their service. It is typically a mixture of fixed salary, variable performance-based bonuses and benefits and other perquisites all ideally configured to take into account government regulations, tax law, the desires of the organization and the executive. 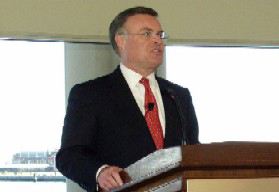 Kenneth D. Lewis is the former CEO, president, and chairman of Bank of America, the second largest bank in the United States and twelfth largest by total asset in the world. While CEO of Bank of America, Lewis was noted for purchasing Countrywide Financial and Merrill Lynch resulting in large losses for the bank and necessitating financial assistance from the federal government. On September 30, 2009 Bank of America confirmed that Lewis would be retiring by the end of the year. Lewis was replaced by Brian Moynihan as president and CEO and Walter Massey as chairman of the board.

The following is a glossary which defines terms used in mergers, acquisitions, and takeovers of companies, whether private or public.

John H. Hammergren is an American businessman. He is best known for his role as Chairman and CEO of McKesson Corporation since 1999. On November 1, 2018 Hammergren announced his plan to retire. On April 1, 2019, he officially retired from McKesson. He was succeeded by Brian Tyler. 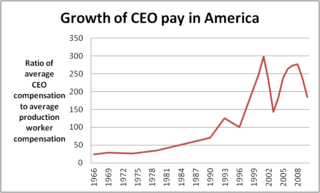 In the United States, the compensation of company executives is distinguished by the forms it takes and its dramatic rise over the past three decades. Within the last 30 years, executive compensation or pay has risen dramatically beyond what can be explained by changes in firm size, performance, and industry classification. This has received a wide range of criticism leveled against it.

Eleven national referendums were held in Switzerland during 2013. Voters approved six proposals related to spatial planning, executive pay, family policy, amendments to the laws on asylum and epidemics and an increase in the length of petrol station shop opening hours. The other five proposals on directly electing the Federal Council, abolishing compulsory military service, limiting salaries in a company to 12 times the lowest paid worker, tax credits for stay-at-home parents and an increase in road tax were rejected.