The table below lists domestic professional sports leagues from around the world by total attendances for the last completed season for which data is available.[ citation needed ] The following points should be considered:

The leagues are segregated between those which normally would play in an outdoor stadium as opposed to those leagues that use indoor arenas. Some outdoor league stadiums are equipped with either retractable or non-retractable roofs where weather conditions (such as rain or extreme heat/cold) would not allow a game to be played or watched effectively, comfortably or safely without such cover. The tables are sorted by average attendance, with a minimum of 2,000. 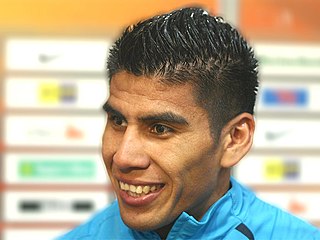 Carlos Arnoldo Salcido Flores is a former Mexican professional footballer. Salcido started his career as a left-back, then converted to defensive midfielder, and ended it as a central defender.

The Peru First Division —known as Liga 1 Movistar for sponsorship reasons and officially as Liga 1 — is the top flight of association football in Peru. It has been referred to as Torneo Descentralizado since 1966, when the first teams residing outside the Lima and Callao provinces were invited to compete in the inaugural league national competition.

Mauro Boselli is an Argentine professional footballer who plays as a striker for Sport Club Corinthians Paulista.

Mexico's most popular sport is football. As of 2018, the top tier leagues are Liga MX for the men and Liga MX Femenil for women. 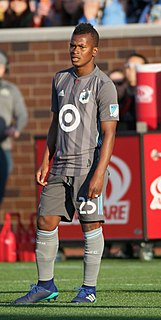 Carlos Darwin Quintero Villalba is a Colombian professional footballer who plays as a forward for MLS club Houston Dynamo. Quintero is also known by his nickname of El Científico del Gol. He has played various roles throughout his career, spending time leading the line as a striker, playing out wide as a winger, and playing underneath another striker as a second striker and central attacking midfielder throughout his career. His main attributes throughout his career have been his pace, creativity, and technical and dribbling ability.

The Kontinental Hockey League (KHL) is an international professional ice hockey league founded in 2008. It comprises member clubs based in Belarus (1), China (1), Finland (1), Latvia (1), Kazakhstan (1) and Russia (19) for a total of 24. It is widely considered to be the premier professional ice hockey league in Europe and Asia, and second in the world behind the National Hockey League. KHL has the third-highest average attendance in Europe with 6,121 spectators per game in the regular season, and the highest total attendance in Europe with 5.32 million spectators in the regular season. 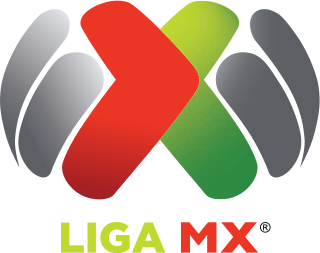 The Liga MX, is the top professional football division of the Mexican football league system. Administered by the Mexican Football Federation, the league comprises 18 clubs, with one being relegated every year based upon its league performances over the previous three years. The season has two tournaments: Apertura, which starts in the summer, and Clausura, which starts in the winter. The first 8 teams in the table at the end of the regular phase of the tournament qualify to the liguilla. 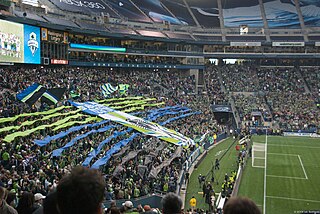 Major League Soccer is the premier professional soccer league in the United States and Canada. Competition began in 1996 and MLS attendance has grown rapidly since the early 2000s, making it one of the fastest-growing sports leagues in the world. The average attendance of 21,692 in 2016 was a 57% increase over the 13,756 average in 2000. The total attendance of 7,375,144 in 2016 is more than triple the 2,215,019 total of 2002. Similar to Major League Baseball and the National Hockey League, attendance is based on the number of tickets distributed.

The 2011–12 Liga de Ascenso season is the second-level football league of Mexico.

The 2013–14 Liga MX season was the 67th professional top-flight football league season in Mexico. The season was split into two competitions: the Torneo Apertura and the Torneo Clausura; each of identical format and contested by the same eighteen teams.

The 2016–17 Liga MX season was the 70th professional season of the top-flight football league in Mexico. The season is split into two championships—the Torneo Apertura and the Torneo Clausura—each in an identical format and each contested by the same eighteen teams. The fixtures were announced on 9 June 2016.

The Liga BBVA MX Femenil is the highest division of women's football in Mexico. Supervised by the Mexican Football Federation, this professional league has 18 teams, each coinciding with a Liga MX squad. Following the same schedule as the men's league, each season has two halves: an apertura tournament, which takes place from July to December, and a clausura tournament, which takes place from January to May. The league's first official competitions took place in May 2017 via the Copa MX Femenil, while the inaugural season began in July 2017. Liga MX CEO Enrique Bonilla stated the league was created in order to nurture the stars of the Mexico women's national football team and build an infrastructure for women's football nationwide.