The Manx are Celtic people originating in the Isle of Man in the Irish Sea in northern Europe. Their native culture has significant Norse and English influences.

Amsterdam is a hamlet within the Rural Municipality of Buchanan No. 304, Saskatchewan, Canada. Listed as a designated place by Statistics Canada, the hamlet had a population of 25 in the Canada 2016 Census. The hamlet is located 63.9 km north of the city of Yorkton and 1.5 km west of Highway 9. The community was founded at the turn of the 20th century by Dutch immigrants, hence the name. In its prime, the community had a post office, grain elevator, garage, and a school. It, like many small towns, has been hit hard by the gradual trend toward urbanization. The hamlet now has fewer than 25 people, most are of Ukrainian descent.

Nigerian Canadians are Canadian citizens and residents of Nigerian origin and descent. Nigerians began migrating to Canada during the 1967–1970 Biafra War. Nigerians were not broken out separately in immigration statistics until 1973. 3,919 landed immigrants of Nigerian nationality arrived in Canada from 1973 to 1991. There is a significant number of Nigerians living in the Greater Toronto Area, especially in Brampton and Etobicoke. In the 2016 Census, 51,800 people identified themselves as Nigerians, with over half living in Ontario. There are many more Nigerians in Canada, who identified themselves by their tribe instead of their country - such as 9,600 as Yoruba, 5,600 as Igbo, and 1,900 as Edo. There has been a steady increase in the number of Nigerians living in the western cities of Canada, such as Calgary, Edmonton, and Winnipeg. Winnipeg Nigerians have an easier time adapting to life in Canada than other immigrants because their homeland of Nigeria has the English language as the official language and it is spoken by the majority of Nigeria's population.

Assyrian Canadians are Canadians of Assyrian descent or Assyrians who have Canadian citizenship. According to the 2011 Census there were 10,810 Canadians who claimed Assyrian ancestry, an increase compared to the 8,650 in the 2006 Census. 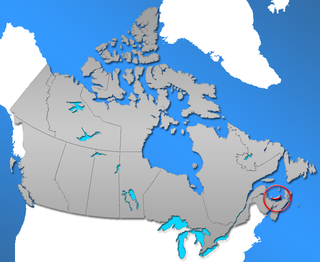 Demographics of the province of Prince Edward Island, Canada. According to the 2011 National Household Survey, the largest ethnic group consists of people of Scottish descent (39.2%), followed by English (31.1%), Irish (30.4%), French (21.1%), German (5.2%), and Dutch (3.1%) descent. Prince Edward Island is mostly a white community and there are few visible minorities. Chinese people are the largest visible minority group of Prince Edward Island, comprising 1.3% of the province's population. Almost half of respondents identified their ethnicity as "Canadian." Prince Edward Island is by a strong margin the most Celtic and specifically the most Scottish province in Canada and perhaps the most Scottish place (ethnically) in the world, outside Scotland. 38% of islanders claim Scottish ancestry, but this is an underestimate and it is thought that almost 50% of islanders have Scottish roots. When combined with Irish and Welsh, almost 80% of islanders are of some Celtic stock, albeit most families have resided in PEI for at least two centuries. Few places outside Europe can claim such a homogenous Celtic ethnic background. The only other jurisdiction in North America with such a high percentage of British Isles heritage is Newfoundland.

European Canadians, also known as Euro-Canadians, are Canadians with ancestry from Europe. They form the largest panethnic group within Canada.

Manx Australians are Australian citizens of Manx descent or Manx people who reside in Australia.

Albanian Canadians are people of full or partial Albanian ancestry and heritage in Canada. They trace their ancestry to the territories with a large Albanian population in the Balkans among others to Albania, Italy, Kosovo, North Macedonia and Montenegro. They are adherents of different religions and are predominantly Christians, Muslims as well as Irreligious.

Georgians in Canada may refer to people born in or residing in Canada of Georgian national background or descent.

Breton Canadians are Canadian citizens of Breton descent or a Brittany-born person who resides in Canada.

Manx Americans are Americans of full or partial Manx ancestral origin or Manx people who reside in the United States of America.

Palestinian Canadians are Canadian citizens of Palestinian descent or Palestine-born people residing in Canada. According to the 2011 Census there were 31,245 Canadians who claimed Palestinian ancestry.

Peruvian Canadians are Canadian citizens of Peruvian descent or a Peru-born person who resides in Canada. According to the 2016 Census there were 42,145 Canadians who claimed full or partial Peruvian ancestry. The largest Peruvian Canadian community exists in the francophone province of Quebec.

Yemeni Canadians are Canadians of Yemeni descent or Yemenis who have Canadian citizenship.

New Zealand Canadians are Canadian citizens of New Zealand descent or New Zealand-born people who reside in Canada. According to the 2011 Census there were 13,890 Canadians who claimed full or partial New Zealand ancestry.