A military budget (or military expenditure), also known as a defense budget , is the amount of financial resources dedicated by a state to raising and maintaining an armed forces or other methods essential for defense purposes.

Military budgets often reflect how strongly a country perceives the likelihood of threats against it, or the amount of aggression it wishes to conjure. It also gives an idea of how much financing should be provided for the upcoming fiscal year. The size of a budget also reflects the country's ability to fund military activities. [2] Factors include the size of that country's economy, other financial demands on that entity, and the willingness of that entity's government or people to fund such military activity. Generally excluded from military expenditures is spending on internal law enforcement and disabled veteran rehabilitation. The effects of military expenditure on a nation's economy and society, and what determines military expenditure, are notable issues in political science and economics. There are controversial findings and theories regarding these topics. Generally, some suggest military expenditure is a boost to local economies. [3] Still, others maintain military expenditure is a drag on development. [4]

Among the countries maintaining some of the world's largest military budgets, China, India, France, Germany, Japan, Russia, the United Kingdom and the United States are frequently recognized to be great powers. [5]

According to the Stockholm International Peace Research Institute, in 2018, total world military expenditure amounted to 1822 billion US$. [6]

The Saturday Review magazine in February 1898 outlined the levels of military expenditure as a percentage of tax revenue spent by the then great powers for the year 1897: [8] 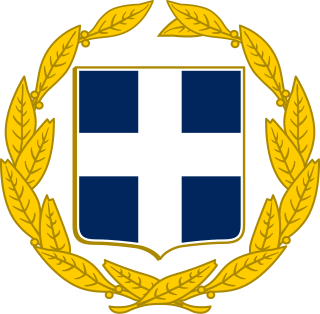 The Armed Forces of the Russian Federation, commonly known as the Russian Armed Forces, are the military forces of the Russian Federation. They are divided into the Ground Forces, Navy, and Aerospace Forces. There are also two independent arms of service: Strategic Missile Troops and the Airborne Troops. Under the federal law of Russia, the Russian Armed Forces, along with the Federal Security Service (FSB)'s Border Troops, the National Guard, the Ministry of Internal Affairs (MVD), the Federal Protective Service (FSO), the Foreign Intelligence Service (SVR), the Main Directorate of the General Staff (GRU) and the Ministry of Emergency Situations (EMERCOM)'s civil defence form Russia's military services; and are under direct control of the Security Council of Russia.

The military–industrial complex (MIC) describes the relationship between a nation's military and the defense industry that supplies it, seen together as a vested interest which influences public policy. A driving factor behind this relationship between the government and defense-minded corporations is that both sides benefit—one side from obtaining war weapons, and the other from being paid to supply them. The term is most often used in reference to the system behind the military of the United States, where it is most prevalent due to close links between defense contractors, the Pentagon and politicians and gained popularity after a warning of its detrimental effects in the farewell address of President Dwight D. Eisenhower on January 17, 1961.

Public expenditure is spending made by the government of a country on collective needs and wants such as pension, provisions, security, infrastructure, etc. Until the 19th century, public expenditure was limited as laissez faire philosophies believed that money left in private hands could bring better returns. In the 20th century, John Maynard Keynes argued the role of public expenditure in determining levels of income and distribution in the economy. Since then, government expenditures has shown an increasing trend. Sources of government revenue include taxes, and non-tax revenues. 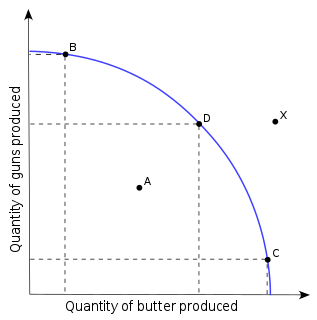 In macroeconomics, the guns versus butter model is an example of a simple production–possibility frontier. It demonstrates the relationship between a nation's investment in defense and civilian goods. The "guns or butter" model is used generally as a simplification of national spending as a part of GDP. This may be seen as an analogy for choices between defense and civilian spending in more complex economies. The nation will have to decide which balance of guns versus butter best fulfills its needs, with its choice being partly influenced by the military spending and military stance of potential opponents.

The military budget is the largest portion of the discretionary United States federal budget allocated to the Department of Defense, or more broadly, the portion of the budget that goes to any military-related expenditures. The military budget pays the salaries, training, and health care of uniformed and civilian personnel, maintains arms, equipment and facilities, funds operations, and develops and buys new items. The budget funds five branches of the U.S. military: the Army, Navy, Marine Corps, Air Force, and Space Force.

The military budget of China is the portion of the overall budget of China that is allocated for the funding of the military of China. This military budget finances employee salaries and training costs, the maintenance of equipment and facilities, support of new or ongoing operations, and development and procurement of new weapons, equipment, and vehicles. Every March, as part of its annual state budget, China releases a single overall figure for national military expenditures.

Fiscal policy is considered any changes the government makes to the national budget in order to influence a nation's economy. The approach to economic policy in the United States was rather laissez-faire until the Great Depression. The government tried to stay away from economic matters as much as possible and hoped that a balanced budget would be maintained. Prior to the Great Depression, the economy did have economic downturns and some were quite severe. However, the economy tended to self-correct so the laissez faire approach to the economy tended to work.

The United States federal budget comprises the spending and revenues of the U.S. federal government. The budget is the financial representation of the priorities of the government, reflecting historical debates and competing economic philosophies. The government primarily spends on healthcare, retirement, and defense programs. The non-partisan Congressional Budget Office provides extensive analysis of the budget and its economic effects. It has reported that large budget deficits over the next 30 years are projected to drive federal debt held by the public to unprecedented levels—from 98 percent of gross domestic product (GDP) in 2020 to 195 percent by 2050.

The United States Department of Defense is an executive branch department of the federal government charged with coordinating and supervising all agencies and functions of the government directly related to national security and the United States Armed Forces. The DOD is the largest employer in the world, with over 1.4 million active-duty service members as of 2021. More employees include over 826,000 National Guard and reservists from the armed forces, and over 732,000 civilians bringing the total to over 2.8 million employees. Headquartered at the Pentagon in Arlington, Virginia, just outside Washington, D.C., the DoD's stated mission is to provide "the military forces needed to deter war and ensure our nation's security".

The United States federal budget consists of mandatory expenditures, discretionary spending for defense, Cabinet departments and agencies, and interest payments on debt. This is currently over half of U.S. government spending, the remainder coming from state and local governments.

Military budget of Turkey, Turkey’s defense spending stood at 29.4 billion Turkish Liras, or $13.2 billion, old Turkish Defense Minister İsmet Yılmaz said 8 November 2014. He was responding to a question from an opposition party leader, the Nationalist Movement Party’s Ankara deputy Özcan Yeniçeri, who asked how much Turkey had spent on its defense budget since 2002. Yılmaz said Turkey spent about 1.71 percent of its Gross Domestic Product, or the GDP on defense in 2014. Turkey used to spend 3.5 percent of its GDP on defense in 2002.

The economics of defense or defense economics is a subfield of economics, an application of the economic theory to the issues of military defense. It is a relatively new field. An early specialized work in the field is the RAND Corporation report The Economics of Defense in the Nuclear Age by Charles J. Hitch and Roland McKean . It is an economic field that studies the management of government budget and its expenditure during mainly war times, but also during peace times, and its consequences on economic growth. It thus uses macroeconomic and microeconomic tools such as game theory, comparative statistics, growth theory and econometrics. It has strong ties to other subfields of economics such as public finance, economics of industrial organization, international economics, labour economics and growth economics.