An alliance is a relationship among people, groups, or states that have joined together for mutual benefit or to achieve some common purpose, whether or not explicit agreement has been worked out among them. [1] Members of an alliance are called allies. Alliances form in many settings, including political alliances, military alliances, and business alliances. When the term is used in the context of war or armed struggle, such associations may also be called allied powers, especially when discussing World War I or World War II.

A formal military alliance is not required for being perceived as an ally—co-belligerence, fighting alongside someone, is enough. According to this usage, allies become so not when concluding an alliance treaty but when struck by war.

The Allied Powers in World War I (also known as the Entente Powers) were initially the United Kingdom, France, the Russian Empire, Belgium, Serbia, Montenegro and Japan, joined later by Italy, Portugal, Romania, the United States, Greece and Brazil. Some, such as the Russian Empire, withdrew from the war before the armistice due to revolution or defeat.

After the end of World War II and during the Cold War, the North Atlantic Treaty Organization (NATO) was formed as a political and military alliance that promotes anti-communist values. [3]

More recently, the term "Allied forces" has also been used to describe the coalition of the Gulf War, as opposed to forces the Multi-National Forces in Iraq which are commonly referred to as "Coalition forces" or, as by the George W. Bush administration, "the coalition of the willing".

Scholars are divided as to the impact of alliances. Several studies find that defensive alliances deter conflict. [4] [5] [6] [7] One study questions these findings, showing that alliance commitments deterred conflict in the prenuclear era but has no statistically meaningful impact on war in the postnuclear era. [8] [9] Another study finds that while alliance commitments deter conflict between sides with a recent history of conflict, alliances tend to provoke conflicts between states without such a history. [10]

A 2000 study in the Journal of Conflict Resolution found that allies fulfill their alliance commitments approximately 75% of the time. [11] Most research suggests that democracies are more reliable allies than non-democracies. [12] [13] [14] A 2004 study did however question whether alliance commitments by democracies are more durable. [15] A 2018 study updated and extended the data from the 2000 Journal of Conflict Resolution study and found that allies only fulfill their commitments about 50% of the time from 1816 to 2003. [16] According to the study, "States honored their alliance commitments 66% of the time prior to 1945 but the compliance rate drops to 22% from 1945 to 2003. Moreover, the rates of fulfillment for defense pacts (41%) and nonaggression pacts (37%) are dramatically lower than offensive alliances (74%) and neutrality agreements (78%)." [16]

One of the most profound effects of alliances can be seen in technological innovation, due to conduits of knowledge flows that are open between allies but closed between rivals. [17]

According to a 2017 poll by WIN/GIA, the United States was the most preferred ally internationally. Russia and China, who preferred one another, both trailed America globally. Four countries, Bulgaria, Greece, Slovenia and Turkey, preferred Russia, despite being members of NATO. [18]

A civil war, also known as an intrastate war in polemology, is a war between organized groups within the same state or country. The aim of one side may be to take control of the country or a region, to achieve independence for a region, or to change government policies. The term is a calque of Latin bellum civile which was used to refer to the various civil wars of the Roman Republic in the 1st century BC.

The North Atlantic Treaty Organization, also called the North Atlantic Alliance, is an intergovernmental military alliance between 30 European and North American countries. The organization implements the North Atlantic Treaty that was signed on 4 April 1949. NATO constitutes a system of collective defence whereby its independent member states agree to mutual defence in response to an attack by any external party. NATO's Headquarters are located in Haren, Brussels, Belgium, while the headquarters of Allied Command Operations is near Mons, Belgium.

A neutral country is a state that is neutral towards belligerents in a specific war or holds itself as permanently neutral in all future conflicts. As a type of non-combatant status, nationals of neutral countries enjoy protection under the law of war from belligerent actions to a greater extent than other non-combatants such as enemy civilians and prisoners of war.

Bilateralism is the conduct of political, economic, or cultural relations between two sovereign states. It is in contrast to unilateralism or multilateralism, which is activity by a single state or jointly by multiple states, respectively. When states recognize one another as sovereign states and agree to diplomatic relations, they create a bilateral relationship. States with bilateral ties will exchange diplomatic agents such as ambassadors to facilitate dialogues and cooperations.

A political campaign is an organized effort which seeks to influence the decision making progress within a specific group. In democracies, political campaigns often refer to electoral campaigns, by which representatives are chosen or referendums are decided. In modern politics, the most high-profile political campaigns are focused on general elections and candidates for head of state or head of government, often a president or prime minister.

Atlanticism, also known as Transatlanticism, is the belief in or support for a close relationship between the United States and Canada, on one hand, and European countries on the other hand, regarding political, economic, and defence issues, in the belief that it would maintain the security and prosperity of the participating countries and protect the perceived values that unite them. The term derives from the Atlantic Ocean that separates Northern America from Europe.

A non-aggression pact or neutrality pact is a treaty between two or more states/countries that includes a promise by the signatories not to engage in military action against each other. Such treaties may be described by other names, such as a treaty of friendship or non-belligerency, etc. Leeds, Ritter, Mitchell, & Long (2002) distinguish between a non-aggression pact and a neutrality pact. They posit that a non-aggression pact includes the promise not to attack the other pact signatories, whereas a neutrality pact includes a promise to avoid support of any entity that acts against the interests of any of the pact signatories. The most readily recognized example of the aforementioned entity is another country, nation-state, or sovereign organization that represents a negative consequence towards the advantages held by one or more of the signatory parties.

Collective security can be understood as a security arrangement, political, regional, or global, in which each state in the system accepts that the security of one is the concern of all, and therefore commits to a collective response to threats to, and breaches to peace. Collective security is more ambitious than systems of alliance security or collective defense in that it seeks to encompass the totality of states within a region or indeed globally, and to address a wide range of possible threats. While collective security is an idea with a long history, its implementation in practice has proved problematic. Several prerequisites have to be met for it to have a chance of working. It is the theory or practice of states pledging to defend one another in order to deter aggression or to exterminate transgressor if international order has been breached.

The resource curse, also known as the paradox of plenty or the poverty paradox, is the phenomenon of countries with an abundance of natural resources having less economic growth, less democracy, or worse development outcomes than countries with fewer natural resources. There are many theories and much academic debate about the reasons for, and exceptions to, these adverse outcomes. Most experts believe the resource curse is not universal or inevitable, but affects certain types of countries or regions under certain conditions.

Militarized interstate disputes (MIDs) are conflicts between states that do not involve a full-scale war. These include any conflicts in which one or more states threaten, display, or use force against one or more other states. They can vary in intensity from threats of force to actual combat short of war. A MID is composed of a sequence of related militarized incidents, all but the first being an outgrowth of or response to a previous militarized incident. An initiator of a war need not necessarily be the same as the initiator of a preceding MID, since a MID can be started by a show of force, whereas the initiator of a war begins the actual combat. Under this definition, over 2400 MIDs have been identified from 1816 to 2014 in the Correlates of War project.

The nuclear umbrella is a guarantee by a nuclear weapons state to defend a non-nuclear allied state. The context is usually the security alliances of the United States with Japan, South Korea, the North Atlantic Treaty Organization, and Australia, originating with the Cold War with the Soviet Union. For some countries, it was an alternative to acquiring nuclear weapons themselves; other alternatives include regional nuclear-weapon-free zones or nuclear sharing. 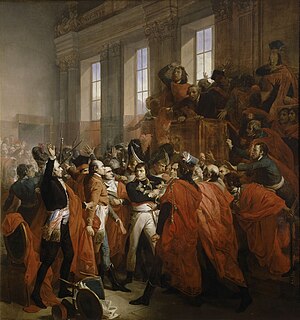 A coup d'état or just coup is the removal and seizure of a government and its powers. Typically, it is an illegal, unconstitutional seizure of power by a political faction, the military, or a dictator. Many scholars consider a coup successful when the usurpers seize and hold power for at least seven days.

The economics of defense or defense economics is a subfield of economics, an application of the economic theory to the issues of military defense. It is a relatively new field. An early specialized work in the field is the RAND Corporation report The Economics of Defense in the Nuclear Age by Charles J. Hitch and Roland McKean . It is an economic field that studies the management of government budget and its expenditure during mainly war times, but also during peace times, and its consequences on economic growth. It thus uses macroeconomic and microeconomic tools such as game theory, comparative statistics, growth theory and econometrics. It has strong ties to other subfields of economics such as public finance, economics of industrial organization, international economics, labour economics and growth economics.

Brett Ashley Leeds is an American political scientist. She is a professor of political science at Rice University, where she has also been the chair of the department. She studies how domestic politics affect international conflict and cooperation, as well as international institutions. She specializes in how alliances between countries function, and how they help countries prevent wars.

Constructivism presumes that ethnic identities are shapeable and affected by politics. Through this framework, constructivist theories reassesses conventional political science dogmas. Research indicates that institutionalized cleavages and a multiparty system discourage ethnic outbidding and identification with tribal, localized groups. In addition, constructivism questions the widespread belief that ethnicity inherently inhibits national, macro-scale identification. To prove this point, constructivist findings suggest that modernization, language consolidation, and border-drawing, weakened the tendency to identify with micro-scale identity categories. One manifestation of ethnic politics gone awry, ethnic violence, is itself not seen as necessarily ethnic, since it attains its ethnic meaning as a conflict progresses.