NPO Politiek is a public television channel operated by the NOS, the public broadcaster which supplies news and sports to all national public television and radio networks. Programmes come live from The Hague, when the parliament is in session. In the summertime when the parliament is not in session the NPO Politiek channel changes into NPO Sport , also supplied by NOS. On 10 March 2014, Politiek 24 changed its name into NPO Politiek. [1]

The Nederlandse Omroep Stichting is one of the broadcasting organisations making up the Netherlands Public Broadcasting system. It has a special statutory obligation to make news and sports programmes for the three Dutch public television channels and the Dutch public radio services.

NPO 3 is the third and youngest of the terrestrial television channels operated by the Dutch public-broadcasting organization NPO in the Netherlands and carries programmes provided by member-based non-profit broadcasting associations. It is oriented towards children, youth and innovative television.

BVN, is a Dutch free-to-air television channel providing Dutch and Flemish public-service television to viewers around the world. 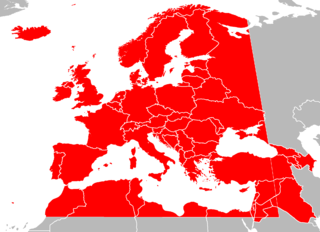 The European Broadcasting Area (EBA) is defined by the International Telecommunication Union (ITU) as such:

NPO 3FM is a Dutch rhythmic CHR radio station controlled by public broadcaster NPO. The vast majority of the songs played on-air are rock, alternative, indie and pop, though dance and top 40 tracks may also air at times. It can be compared with BBC Radio 1.

Nederland 24 was the collective name for a number of specialty television channels from the Dutch public broadcasting system. It also broadcasts a sample channel of the same name featuring a mix of programming from the other thematic channels. A couple of these specialty channel are still available, but are now fully under the wings of the NPO.

This article refers to sports broadcasting contracts in the Netherlands. For a list of rights in other countries, see Sports television broadcast contracts.

NPO 1 Extra is a television channel jointly operated by Dutch public broadcasters AVROTROS, BNNVARA, EO, KRO-NCRV and MAX. It was originally launched as HilversumBest on 1 December 2006. NPO 1 Extra presents highlights of more than sixty years of Dutch television history. The channel was founded by Han Peekel. In April 2009 HilversumBest renamed into Best24. On 10 March 2014 the channel changed its name into NPO Best On 26 March 2018 the channel was renamed by NPO 1 Extra.

NPO Nieuws is a 24-hour news channel operated by the NOS, the public broadcaster which supplies news and sports to all national public television and radio networks. NOS also provides programming for the political channel, NPO Politiek.

NPO Sport is a Dutch sports channel owned by the Nederlandse Publieke Omroep (NPO) and operated by Nederlandse Omroep Stichting (NOS). First launched on 19 July 2009, the channel carries sports programming. It is carried in the channel space of NPO Politiek during the summer months when the legislature is not in session.

Stichting Nederlandse Publieke Omroep or Dutch Foundation for Public Broadcasting is a Dutch public broadcasting organisation that administers public broadcasting services in the Netherlands. The NPO is also the owner of the radio-spectrum licence and public DVB-T and DAB+ frequencies.

NOS Journaal is the umbrella name for the news broadcasts of the Dutch public broadcaster NOS on radio and television. The division of the NOS responsible for gathering and broadcasting the news is known as NOS Nieuws, and is based at the Media Park in Hilversum; the NOS also has fully equipped radio and television studios in The Hague, from which political programmes are often produced.