Southern Cambridgeshire, including both the district of South Cambridgeshire and the city of Cambridge, has a population of over 281,000 (including students) and an area of 1,017.28 km square.

On the abolition of South Herefordshire and Hereford districts to form the unitary Herefordshire in 1998, South Cambridgeshire became the only English district to completely encircle another.

The district's coat of arms contains a tangential reference to the coat of arms of the University of Cambridge [2] by way of the coat of arms of Cambridge suburb Chesterton. [3] The motto, Niet Zonder Arbyt, means "Not Without Work" (or effort) in pre-standard Dutch; the only Dutch motto in British civic heraldry. It was originally the motto of Cornelius Vermuyden, who drained the Fens in the 17th century. The district council's headquarters moved from Cambridge to Cambourne in 2004.

South Cambridgeshire District Council's headquarters are located in South Cambridgeshire Hall in the Cambourne Business Park in Cambourne. [7] The council consists of 45 councillors (reduced from 57 in 2018), representing 26 electoral wards (reduced from 34 in 2018). Since 2018 the council has been run by the Liberal Democrats. Before this, from 2007, the Conservatives had control, and prior to that, no party had overall control of the council.

The council consists of 45 councillors, representing 26 electoral wards. The Liberal Democrats currently have a majority on the council, having gained control in the 2018 local elections. Prior to this, the Conservative party had overall control of the council since 2007, although independents formed the majority of the council from its formation in 1973 until 1992. Councillors are elected to four year terms. The 2018 elections were the first of the All-out Elections under the new policy agreed in 2015; [8] previous to that, elections for a third of all councillors took place in three years out of a four-year cycle, with one year without an election.

ScotAirways has its head office on the grounds of Cambridge Airport in South Cambridgeshire. [11] [12]

Cambourne is a new settlement and civil parish in Cambridgeshire, England, in the district of South Cambridgeshire. It lies on the A428 road between Cambridge, 9 miles (14 km) to the east, and St Neots and Bedford to the west. It comprises the three villages of Great Cambourne, Lower Cambourne and Upper Cambourne. The area is close to Bourn Airfield. 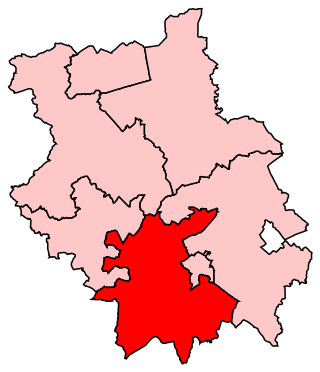 South Cambridgeshire is a constituency represented in the House of Commons of the UK Parliament since 2019 by Anthony Browne, a Conservative.

Girton is a village and civil parish of about 1,600 households, and 4,500 people, in Cambridgeshire, England. It lies about 2 miles (3 km) to the northwest of Cambridge, and is the home of Girton College, a constituent college of the University of Cambridge. 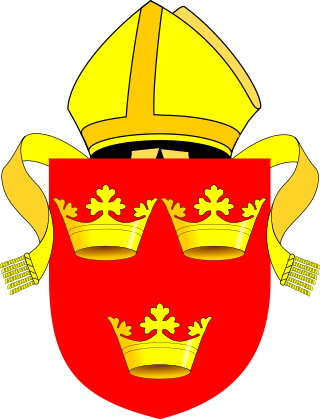 The Diocese of Ely is a Church of England diocese in the Province of Canterbury. It is headed by the Bishop of Ely, who sits at Ely Cathedral in Ely. There is one suffragan (subordinate) bishop, the Bishop of Huntingdon. The diocese now covers the modern ceremonial county of Cambridgeshire and western Norfolk. The diocese was created in 1109 out of part of the Diocese of Lincoln.

The Cambridgeshire County Football League, currently styled as the Cambridgeshire Fire Places Cambridgeshire County League for sponsorship purposes, is a football competition covering Cambridgeshire and western parts of Suffolk, Norfolk and northwestern parts of Essex in England. It has a total of 16 divisions, headed by the Premier Division. The Premier Division sits at step 7 of the National League System. Below the Premier Division lies the Senior A Division and Senior B Division. Below those two leagues, the structure splits into two parallel ladders of five divisions each. The Premier Division champions may apply for promotion to the Eastern Counties League Division One, the United Counties League or the Spartan South Midlands League but few take up the offer. For instance, at the end of the 2021–22 season, Great Shelford, traditionally one of the stronger sides in the league, were the Premier Division champions, but did not apply for promotion. However, Eaton Socon FC who finished fourth in the same season, were successful in their application to join the SSMFL Division One as they were the only club with the correct ground grading required for step 6 football. 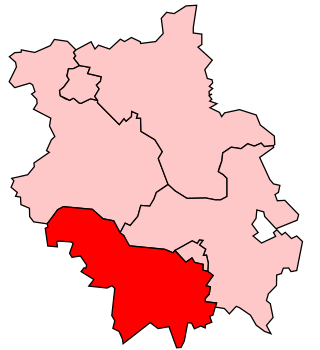 Chesterton is a former United Kingdom Parliamentary constituency. It was created upon the splitting up of the three member Cambridgeshire constituency into three single member divisions in 1885. The seat was abolished in 1918 when Cambridgeshire was recreated as a single-member constituency. 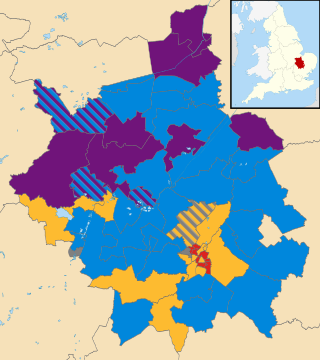 An election to Cambridgeshire County Council took place on 2 May 2013 as part of the 2013 United Kingdom local elections. 69 councillors were elected from 60 electoral divisions, which returned either one or two county councillors each by first-past-the-post voting for a four-year term of office. The electoral divisions were the same as those used at the previous election in 2009. No elections were held in Peterborough, which is a unitary authority outside the area covered by the County Council. The election saw the Conservative Party lose overall control of the council.

Catherine Mary Fiona Rae is a Professor of Superalloys in the Department of Materials at the University of Cambridge. Rae is the Director of the Rolls-Royce UTC in Cambridge. She is known for her expertise in electron microscopy and the behaviour of materials in aerospace applications.