Thuja occidentalis, also known as northern white-cedar, [1] eastern white-cedar, [2] or arborvitae, [2] [3] is an evergreen coniferous tree, in the cypress family Cupressaceae, which is native to eastern Canada and much of the north-central and northeastern United States. [3] [4] It is widely cultivated as an ornamental plant.

Its additional common names include swamp cedar, [3] American arborvitae, [4] and eastern arborvitae. [4] The name arborvitae is particularly used in the horticultural trade in the United States; it is Latin for 'tree of life' – due to the supposed medicinal properties of the sap, bark, and twigs. [5] It is sometimes called white-cedar (hyphenated) or whitecedar (one word) [4] to distinguish it from Cedrus , a distantly related genus of trees also known as cedars. [6]

Unlike the closely related western red cedar (Thuja plicata), northern white cedar is only a small or medium-sized tree, growing to a height of 15 m (49 ft) tall with a 0.9 m (3.0 ft) trunk diameter, exceptionally to 38 metres (125 ft) tall and 1.8 metres (5.9 ft) diameter. [7] The tree is often stunted or prostrate in less favorable locations. The bark is red-brown, furrowed and peels in narrow, longitudinal strips. Northern white cedar has fan-like branches and scaly leaves. The foliage forms in flat sprays with scale-like leaves 3–5 millimetres (1⁄8–3⁄16 in) long.

The species was first described by Carl Linnaeus in 1753. Over 30 synonyms are listed in Kew's Plants of the World Online database. [8]

Northern white cedar is native to an area in the southern part of eastern Canada and the adjacent part of the northern United States. It extends from southeastern Manitoba east throughout the Great Lakes region and into Ontario, Québec, New York, Vermont, New Hampshire, Maine, Prince Edward Island, New Brunswick, and Nova Scotia. Isolated populations occur in west-central Manitoba, and to the south in Massachusetts, Connecticut, Ohio, and Illinois and in the Appalachian Mountains of Kentucky, Tennessee, North Carolina, Pennsylvania, Maryland, Virginia, and West Virginia. [4] In Canada, its range reaches the Arctic treeline and the southern tip of Hudson Bay. It grows mainly in places with cooler summers, with a typical temperature of 16 to 22 °C (61 to 72 °F) in July, and a shorter growing season, from 90 to 180 days. [9]

Northern white cedar grows naturally in wet forests, being particularly abundant in coniferous swamps, where other larger and faster-growing trees cannot compete successfully. It also occurs on other sites with reduced tree competition, such as cliffs. Although not currently listed as endangered, wild white cedar populations are threatened in many areas by high deer numbers; deer find the soft evergreen foliage a very attractive winter food and strip it rapidly. The largest known specimen is 34 m (112 ft) tall and 175 cm (69 in) diameter, on South Manitou Island within Leelanau County, Michigan.[ citation needed ] Northern white cedars can be very long-lived trees in certain conditions, with notably old specimens growing on cliffs where they are inaccessible to deer and wildfire. As of 2008, the oldest known living specimen was 1,141 years old, [10] but a dead specimen with 1,653 growth rings has been found. [11] Despite their age, these very old trees are small and stunted due to the difficult growing conditions. These individuals' long lifespans have been attributed to their slow growth and their ability to survive when different sections of the tree are damaged or killed. [12] The Witch Tree, a T. occidentalis growing out of a cliff face on Lake Superior in Minnesota, was described by the French explorer Sieur de la Verendrye as being a mature tree in 1731; it is still alive today.

Specimens found growing on cliff faces in southern Ontario are the oldest trees in Eastern North America and all of Canada, having achieved ages in excess of 1,653 years. [4]

Thuja occidentalis is a tree with important uses in traditional Ojibwe culture. Honored with the name Nookomis Giizhik (Grandmother Cedar), the tree is the subject of sacred legends and is considered a gift to humanity for its myriad of uses, among them crafts, construction, and medicine. [13] It is one of the four plants of the Ojibwe medicine wheel, associated with the north. The foliage is rich in vitamin C and is believed to be the annedda, which cured the scurvy of Jacques Cartier and his party in the winter of 1535–1536. [9] Due to the presence of the neurotoxic compound thujone, internal use can be harmful if used for prolonged periods or while pregnant.[ citation needed ] It is commercially used for rustic fencing and posts, lumber, poles, shingles, and in the construction of log cabins. [9] It is the preferred wood for the structural elements, such as ribs and planking, of birchbark canoes and the planking of wooden canoes. [14]

The essential oil within the plant has been used for cleansers, disinfectants, hair preparations, insecticides, liniment, room sprays, and soft soaps. The Ojibwa reportedly made a soup from the inner bark of the soft twigs. Others have used the twigs to make teas to relieve constipation and headache. [14]

T. occidentalis is widely used as an ornamental tree, particularly for screens and hedges, in gardens, parks, and cemeteries. Over 300 cultivars exist, showing great variation in colour, shape, and size, with some of the more common ones being 'Degroot's Spire', 'Ellwangeriana', 'Hetz Wintergreen', 'Lutea', 'Rheingold', 'Smaragd' (or 'Emerald Green'), 'Techny', and 'Wareana'. It was introduced into Europe as early as 1540.[ citation needed ] These cultivars have gained the Royal Horticultural Society's Award of Garden Merit:

Thuja is a genus of coniferous trees or shrubs in the Cupressaceae. There are five species in the genus, two native to North America and three native to eastern Asia. The genus is monophyletic and sister to Thujopsis. Members are commonly known as arborvitaes, thujas or cedars. 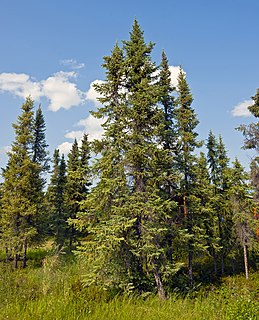 Picea mariana, the black spruce, is a North American species of spruce tree in the pine family. It is widespread across Canada, found in all 10 provinces and all 3 territories. It is the official tree of the province of Newfoundland and Labrador and is that province's most numerous tree. The range of the black spruce extends into northern parts of the United States: in Alaska, the Great Lakes region, and the upper Northeast. It is a frequent part of the biome known as taiga or boreal forest.

Platanus occidentalis, also known as American sycamore, American planetree, western plane, occidental plane, buttonwood, and water beech, is a species of Platanus native to the eastern and central United States, the mountains of northeastern Mexico, extreme southern Ontario, and possibly extreme southern Quebec. It is usually called sycamore in North America, a name which can refer to other types of trees in other parts of the world. 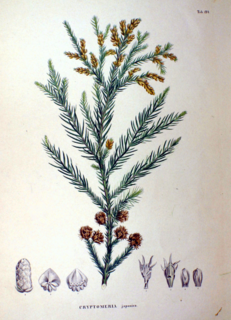 Tilia platyphyllos, the large-leaved lime or large-leaved linden, is a species of flowering plant in the family Malvaceae (Tiliaceae). It is a deciduous tree, native to much of Europe, including locally in southwestern Great Britain, growing on lime-rich soils. The common names largeleaf linden and large-leaved linden are in standard use throughout the English-speaking world except in the British Isles, where it is known as large-leaved lime. The name "lime", possibly a corruption of "line" originally from "lind", has been in use for centuries and also attaches to other species of Tilia. It is not, however, closely related to the lime fruit tree, a species of citrus.

Chamaecyparis lawsoniana, known as Port Orford cedar or Lawson cypress, is a species of conifer in the genus Chamaecyparis, family Cupressaceae. It is native to Oregon and northwestern California, and grows from sea level up to 4,900 feet (1,500 m) in the valleys of the Klamath Mountains, often along streams. 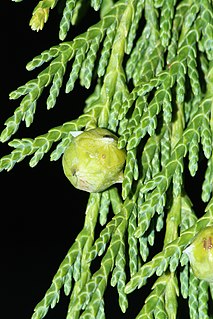 Callitropsis nootkatensis, formerly known as Cupressus nootkatensis is a species of trees in the cypress family native to the coastal regions of northwestern North America. This species goes by many common names including: Nootka cypress, yellow cypress, Alaska cypress, Nootka cedar, yellow cedar, Alaska cedar, and Alaska yellow cedar. The specific epithet "nootkatensis" is derived from its discovery by Europeans on the lands of a First Nation of Canada, those lands of the Nuu-chah-nulth people of Vancouver Island, British Columbia, who were formerly referred to as the Nootka. 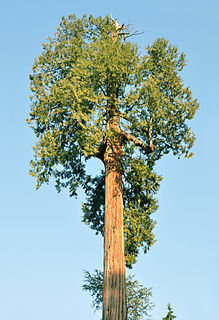 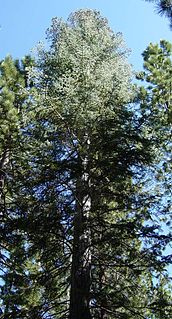 Abies concolor, the white fir, is a coniferous tree in the pine family Pinaceae. This tree is native to the mountains of western North America, including the Cascade Range and southern Rocky Mountains, and into the isolated mountain ranges of southern Arizona, New Mexico, and Northern Mexico. It naturally occurs at elevations between 900–3,400 metres (3,000–11,200 ft).

Picea breweriana, known as Brewer spruce, Brewer's weeping spruce, or weeping spruce, is a species of spruce native to western North America, where it is one of the rarest on the continent. The specific epithet breweriana is in honor of the American botanist William Henry Brewer. 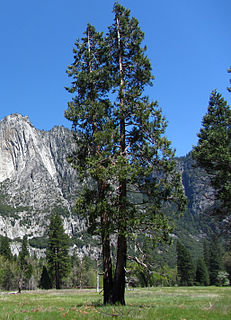 Calocedrus decurrens, with the common names incense cedar and California incense-cedar, is a species of coniferous tree native to western North America. It is the most widely known species in the genus, and is often simply called 'incense cedar' without the regional qualifier. 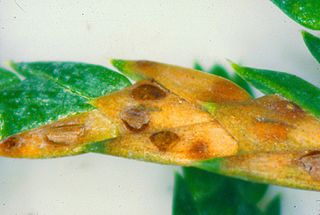 Sambucus racemosa is a species of elderberry known by the common names red elderberry and red-berried elder.

Coniferous swamps are forested wetlands in which the dominant trees are lowland conifers such as northern white cedar. The soil in these swamp areas is typically saturated for most of the growing season and is occasionally inundated by seasonal storms or by winter snow melt. 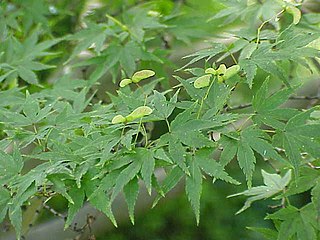 Acer palmatum, commonly known as Japanese maple, palmate maple, or smooth Japanese maple (Japanese: irohamomiji, イロハモミジ, or momiji,, is a species of woody plant native to Japan, Korea, China, eastern Mongolia, and southeast Russia. Many different cultivars of this maple have been selected and they are grown worldwide for their large variety of attractive forms, leaf shapes, and spectacular colors.

Wikimedia Commons has media related to Thuja occidentalis .
This page is based on this Wikipedia article
Text is available under the CC BY-SA 4.0 license; additional terms may apply.
Images, videos and audio are available under their respective licenses.