Tibetan Braille is the braille alphabet for writing the Tibetan language. It was invented in 1992 by German socialworker Sabriye Tenberken. [1] It is based on German braille, with some extensions from international usage. As in print, the vowel a is not written.

Despite Tibetan and Dzongkha (Bhutanese) using the same alphabet in print, Tibetan Braille differs significantly from Dzongkha Braille, which is closer to international norms.

Tibetan Braille follows print orthography. (See Tibetan script.) This is often a poor match for how words are pronounced. Each syllable is rendered in the following order:

The invariable consonants are: [3]

Several consonants, wa, ya, ra, la, and sa, are provided with forms corresponding to the superscript and subscript positions in print: [4]

The assignments for zh and z also match international conventions, as those letters are pronounced like sh and s. Several of the assignments which do not match international braille have the values of German Braille: ⠹ch for c (ch), ⠚j for y[j], ⠵z[ts] for tsh, ⠎s[z] for z, ⠱sch[ʃ] for sh[ʃ], ⠮ß[s] for s. Letters which are not basic to the German alphabet (c, q, x, y) have been reassigned. Several of the aspirated consonants (ch, th, ph) are equivalent to the corresponding unaspirated consonant with an extra dot in the third row.

The short vowel "a" is inherent in the head (main) consonant, and is not written explicitly. When a vowel occurs at the beginning of a word, it is carried by a null consonant ཨ⟨⠁⟩:

Digits are as in English Braille. Basic punctuation: [3] 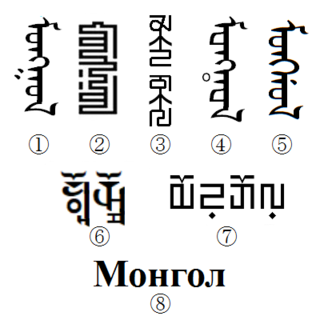 A caron, háček or haček also known as a hachek, wedge, check, inverted circumflex, inverted hat, flying bird, is a diacritic (ˇ) commonly placed over certain letters in the orthography of some Baltic, Slavic, Finnic, Samic, Berber, and other languages to indicate a change in the related letter's pronunciation.

The Tibetan script is an abugida of Indic origin used to write the Tibetic languages such as Tibetan, as well as Dzongkha, Sikkimese, Ladakhi and sometimes Balti. It has also been used for some non-Tibetic languages in close cultural contact with Tibet, such as Thakali. The printed form is called uchen script while the hand-written cursive form used in everyday writing is called umê script. 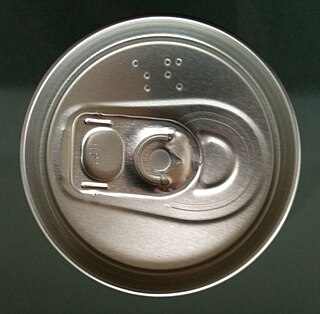 Japanese Braille is the braille script of the Japanese language. It is based on the original braille script, though the connection is tenuous. In Japanese it is known as tenji (点字), literally "dot characters". It transcribes Japanese more or less as it would be written in the hiragana or katakana syllabaries, without any provision for writing kanji. 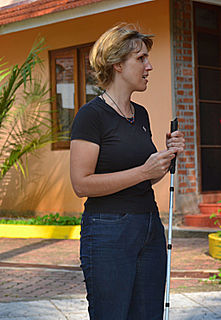 Braille Without Borders (BWB) is an international organisation for the blind in developing countries. It was founded in Lhasa, Tibet by Sabriye Tenberken and Paul Kronenberg in 1998.

Thai Braille (อักษรเบรลล์) and Lao Braille (ອັກສອນເບຣລລ໌) are the braille alphabets of the Thai language and Lao language. Thai Braille was adapted by Genevieve Caulfield, who knew both English and Japanese Braille. Unlike the print Thai alphabet, which is an abugida, Thai and Lao Braille have full letters rather than diacritics for vowels. However, traces of the abugida remain: Only the consonants are based on the international English and French standard, while the vowels are reassigned and the five vowels transcribed a e i o u are taken from Japanese Braille.

The Somali Latin alphabet is an official writing script in the Federal Republic of Somalia and its constituent Federal Member States. It was developed by the Somali linguist Shire Jama Ahmed specifically for transcribing the Somali language, and is based on the Latin script. The Somali Latin alphabet uses all letters of the English Latin alphabet except p, v and z. There are no diacritics or other special characters, although it includes three consonant digraphs: DH, KH and SH. Tone is not marked and a word-initial glottal stop is also not shown. Capital letters are used for names and at the beginning of a sentence.

Bharati braille, or Bharatiya Braille, is a largely unified braille script for writing the languages of India. When India gained independence, eleven braille scripts were in use, in different parts of the country and for different languages. By 1951 a single national standard had been settled on, Bharati braille, which has since been adopted by Sri Lanka, Nepal, and Bangladesh. There are slight differences in the orthographies for Nepali in India and Nepal, and for Tamil in India and Sri Lanka. There are significant differences in Bengali Braille between India and Bangladesh, with several letters differing. Pakistan has not adopted Bharati braille, so the Urdu Braille of Pakistan is an entirely different alphabet than the Urdu Braille of India, with their commonalities largely due to their common inheritance from English or International Braille. Sinhala Braille largely conforms to other Bharati, but differs significantly toward the end of the alphabet, and is covered in its own article.

The goal of braille uniformity is to unify the braille alphabets of the world as much as possible, so that literacy in one braille alphabet readily transfers to another. Unification was first achieved by a convention of the International Congress on Work for the Blind in 1878, where it was decided to replace the mutually incompatible national conventions of the time with the French values of the basic Latin alphabet, both for languages that use Latin-based alphabets and, through their Latin equivalents, for languages that use other scripts. However, the unification did not address letters beyond these 26, leaving French and German Braille partially incompatible, and as braille spread to new languages with new needs, national conventions again became disparate. A second round of unification was undertaken under the auspices of UNESCO in 1951, setting the foundation for international braille usage today.

Turkish Braille is the braille alphabet of the Turkish language.

Dzongkha Braille, or Bhutanese Braille, is the braille alphabet for writing Dzongkha, the national language of Bhutan. It is based on English braille, with some extensions from international usage. As in print, the vowel a is not written.

Burmese Braille is the braille alphabet of languages of Burma written in the Burmese script, including Burmese and Karen. Letters that may not seem at first glance to correspond to international norms are more recognizable when traditional romanization is considered. For example, သ s is rendered ⠹th, which is how it was romanized when Burmese Braille was developed ; similarly စ c and ဇ j as ⠎s and ⠵z.

Cambodian or Khmer Braille is the braille alphabet of the Khmer language of Cambodia.