Tiffin is a city in and the county seat of Seneca County, Ohio, United States. [10] Developed along the Sandusky River, which flows to Lake Erie, Tiffin is about 55 miles southeast of Toledo. The population was 17,963 at the 2010 census. [11] The National Arbor Day Foundation has designated Tiffin as a Tree City USA.

It is the home of Heidelberg University and Tiffin University. At one time the city was noted as a glass and porcelain manufacturing center. Tiffin has several public elementary schools, Tiffin Middle School, Columbian High School. In addition, Calvert Catholic Schools form a parochial system.

The European-American settled history of Tiffin dates back to 1812. The familiar bronze statue of "The Indian Maiden" on Frost Parkway, near Miami Street, marks the site of Fort Ball, a military depot of the War of 1812. During a fighting engagement of that war, Erastus Bowe sighted the location where Tiffin later developed. In 1817, he returned to the site and built his Pan Yan Tavern, on the North Sandusky River. Its name was likely derived from Penn Yan, New York, the seat of Yates County in the Finger Lakes region and the origin for numerous migrants to Ohio.

Early homesteaders followed soon after Bowe, and the settlement of Oakley sprang up around the Pan Yan on the north side of the river. The chief road of the area followed the path of the stagecoaches through Oakley, which was called Fort Ball after 1824.

In 1821, Josiah Hedges purchased a piece of land on the south bank of the river opposite Oakley and founded another settlement. He named this village "Tiffin" in honor of Edward Tiffin, first governor of Ohio and later a member of the United States Senate. He had helped gain statehood for the Ohio Territory in 1803. [12] Tiffin was incorporated by an act of the Ohio Legislature on March 7, 1835. These two communities, split by the Sandusky River, were rivals. In 1850, seeing that their interests lay together, the villages merged to form Tiffin, with Fort Ball becoming a part of Tiffin in March of that year.

In 1824, with the establishment of Seneca County by the Ohio Legislature, Tiffin was designated as the county seat. The county was named after the Seneca Indians, the westernmost of the Iroquois League of Six Nations, who dominated this territory for centuries. They were based in New York, from the Hudson River west along the southern edge of the Great Lakes into Pennsylvania. They had conquered the Ohio Valley during the Beaver Wars and preserved it as hunting grounds.

The discovery of natural gas in the vicinity in 1888 gave new momentum to the city's industrial development. New enterprises located in Tiffin, making it a prosperous industrial city:

In the spring of 1913, the Upper Mississippi and Ohio River valleys were ravaged by one of the most devastating floods in the region's history. Among those communities which suffered the consequences of that flood was Tiffin, located on the Sandusky River in northwest Ohio. During that three-day period, Tiffin sustained more than $1,000,000 in property loss, 46 houses and 2 factories swept away, 10 factories damaged, 69 places of business heavily damaged, 6 bridges within the corporate limits destroyed, and 19 lives were lost.

Ballreich's Bros., a potato chip company, has operated in Tiffin since 1920. While the company's retail market is Northern Ohio, its products have a reputation that extends beyond its local retail market; these are available for shipping anywhere via the company's website. The company was acquired by a group of local investors in 2019. [14]

Tiffin St. Paul's United Methodist Church was the first church in the world to be lit by Edison's light bulb, and the first public building in the United States to be wired for electricity. [15] [16]

Tiffin is home to a large population of German-Americans, descendants of immigrants largely from the mid-19th century. In 1970 Tiffin's peak population was 21,896. Since the late 1970s and industrial restructuring, the city has lost industry, jobs and population. Many jobs have moved offshore.

Tiffin is the home of the historic Ritz Theatre, built in 1928 as a vaudeville house; it is in the Italian Renaissance style. The Ritz Theatre received extensive renovation and restoration in 1998.

A new Mercy Hospital of Tiffin was built and opened in July 2008.

In 2022, Tiffin City Council elected the city's first female mayor, Dawn Iannantuono. [17] Iannantuono is the 50th mayor of the City of Tiffin.

The Tiffin Saints were part of the Independent Baseball League that played an abbreviated single season at the Heidelberg University baseball field in 2014. The Saints were Tiffin's first "professional" baseball team since the Tiffin Mud Hens played in the Ohio State League from 1936–41. The Tiffin Mud Hens won the OSL championship in 1936.

The Saints and IBL, which initially began with six teams, folded before the end of the inaugural season due to financial woes and controversy over whether or not the players were paid. The Adrian Pioneers beat the Ohio Travelers to win the shortened IBL season.

Tiffin is also served by the Calvert Catholic Schools: Calvert High School for grades 7-12, and one campus school, Calvert Elementary, for preschool through grade 6.

Other schools in Tiffin include the Sentinel Career Center, one of two charters schools, Bridges Community Academy, and North Central Academy.

Tiffin is the home of Tiffin University, Heidelberg University, the Tiffin Academy of Hair Design, and formerly of the American Institute of Massotherapy.

Tiffin has the county's only lending library, Tiffin-Seneca Public Library. [26]

Tiffin is served by The Advertiser-Tribune as its primary print newspaper, and TiffinOhio.net as its primary online news website. The city has 4 radio stations, 1600 WTTF AM, 103.7 WCKY-FM, 103.3 WSJG-LP "St. John Paul The Great Radio," and 93.3 COOL FM. It is also served by its local news/sport/entertainment channel, WTIF (Channel 21 on Cable, and currently not carried by DirecTV or Dish Network).

Tiffin has one airport, Seneca County Airport (K16G). A flex-route bus service, the Shelton Shuttle, [27] is provided by Seneca-Crawford Area Transportation. Tiffin is currently on 5 state routes, as well as U.S. Route 224, which skirts the city's southern edge. Tiffin is located on the southern terminus of Northern Ohio and Western Railway. CSX operates a busy line that travels east and west through the city. The city is still a very busy railhub for CSX because of its closeness to CSX's Willard Yard and the "Iron Triangle" in Fostoria.

Wyandot County is a county located in the northwestern part of the U.S. state of Ohio. As of the 2020 census, the population was 21,900. Its county seat is Upper Sandusky. It was named for the Wyandot Indians, who lived here before and after European encounter. Their autonym is variously translated from their language as "around the plains" and "dwellers on the peninsula".

Seneca County is a county located in the northwestern part of the U.S. state of Ohio. As of the 2020 census, the population was 55,069. Its county seat is Tiffin. The county was created in 1820 and organized in 1824. It is named for the Seneca Indians, the westernmost nation of the Iroquois Confederacy, which was based in present-day New York but had territory into Pennsylvania and Ohio. 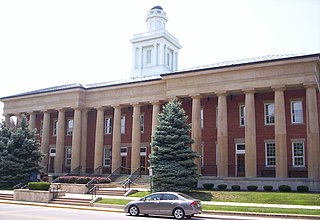 Sandusky County is a county located in the northwestern part of the U.S. state of Ohio. It is southeast of the Toledo Metropolitan Area. As of the 2020 census, the population was 58,896. Its county seat is Fremont. The county was formed on February 12, 1820, from portions of Huron County. The name is derived from the Wyandot word meaning "water". The Sandusky River runs diagonally northeast through the county to its mouth on Sandusky Bay. The bay opens into Lake Erie.

Marion County is a county located in the U.S. state of Ohio. As of the 2020 census, the population was 65,359. Its county seat is Marion. The county was created in 1820 and later organized in 1824. It is named for General Francis "The Swamp Fox" Marion, a South Carolinian officer in the Revolutionary War. 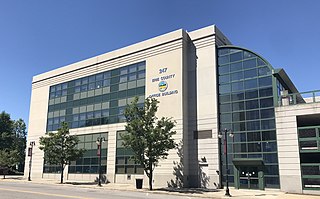 Erie County is a county located in the northern portion of the U.S. state of Ohio. As of the 2020 census, the population was 75,622. Its county seat is Sandusky. The county is named for the Erie tribe, whose name was their word for "wildcat". It was formed in 1838 from the northern third of Huron County and a portion of Sandusky County. 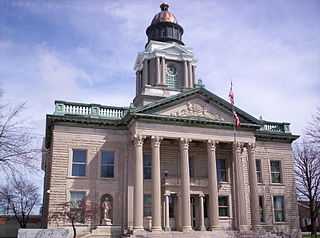 Crawford County is a county located in the north central portion of the U.S. state of Ohio. As of the 2020 census, the population was 42,025. Its county seat is Bucyrus. The county was created in 1820 and later organized in 1836. It was named for Colonel William Crawford, a soldier during the American Revolution.

Tiffin is a city in Johnson County, Iowa, United States. It is part of the Iowa City, Iowa Metropolitan Statistical Area. The population was 4,512 at the time of the 2020 census. F. W. Kent County Park is located just to the west of Tiffin, and is a popular site for outdoor recreation in Johnson County, being noted for its lake, camping facilities, resident whitetail deer herd and wild turkeys, and its cross-country ski trails through rolling acres of oak and hickory forest. 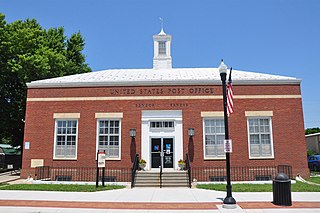 Seneca is a city in and the county seat of Nemaha County, Kansas, United States. As of the 2020 census, the population of the city was 2,139. 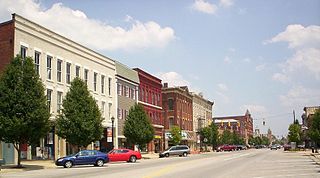 Norwalk is a city in the U.S. state of Ohio and the county seat of Huron County. The population was 17,012 at the 2010 census. The city is the center of the Norwalk Micropolitan Statistical Area and part of the Cleveland-Akron-Canton Combined Statistical Area. Norwalk is located approximately 10 miles (16 km) south of Lake Erie, 51 miles (82 km) west/southwest of Cleveland, 59 miles (95 km) southeast of Toledo, and 58 miles (93 km) west/northwest of Akron. 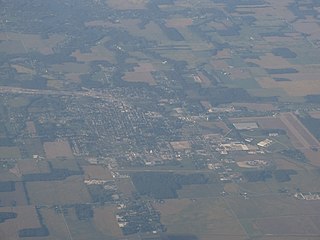 Willard is a city in southwestern Huron County, Ohio, United States, approximately 14 miles (23 km) southwest of Norwalk. The population was 6,236 at the 2010 census.

Port Clinton is a city in and the county seat of Ottawa County, located at the mouth of the Portage River on Lake Erie, about 44 miles east of Toledo. The population was 6,056 at the 2010 census.

Burgoon is a village in Sandusky County, Ohio, United States. The population was 172 at the 2010 census.

Clyde is a city in Sandusky County, Ohio, located eight miles southeast of Fremont. The population was 6,325 at the time of the 2010 census. The National Arbor Day Foundation has designated Clyde as a Tree City USA. 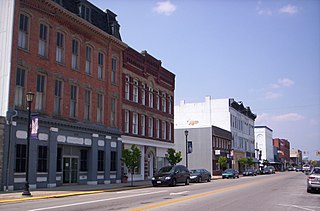 Fremont is a city in and the county seat of Sandusky County, Ohio, United States, located along the banks of the Sandusky River. It is about 35 miles from Toledo and 25 miles from Sandusky. It is part of the Toledo metropolitan area. The population was 16,734 at the 2010 census.

Gibsonburg is a village in Sandusky County, Ohio, United States 33 miles southeast of Toledo. The population was 2,581 at the 2010 census. The National Arbor Day Foundation has designated Gibsonburg as a Tree City USA.

Attica is a village in Seneca County, Ohio, United States. The population was 899 at the 2010 census.

Republic is a village in Seneca County, Ohio, United States. The population was 549 at the 2010 census. 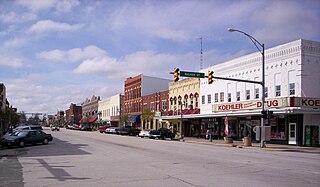 Upper Sandusky is a city and the county seat of Wyandot County, Ohio, United States, along the upper Sandusky River, which flows north to Sandusky Bay and Lake Erie. The city is approximately 59 mi (96 km) south of Toledo and 62 mi (99 km) north of Columbus. The population was 6,596 at the 2010 census. The city was founded in 1843 and named for an earlier Wyandot Indian village of the same name, which was located nearby. It was named "Upper" because it is located near the headwaters of the Sandusky River.

Bellevue is a city in Erie, Huron, Seneca, and Sandusky counties in the U.S. state of Ohio, located 61 miles southwest of Cleveland and 45 miles southeast of Toledo. The population was 8,202 at the 2010 census. The National Arbor Day Foundation has designated Bellevue as a Tree City USA.

Green Springs is a village in Sandusky and Seneca counties in the U.S. state of Ohio. The population was 1,368 at the 2010 census.