Trucidocynodon is an extinct genus of ecteniniid cynodonts from Upper Triassic of Brazil. [1] It contains a single species, Trucidocynodon riograndensis. Fossils of Trucidocynodon were discovered in Santa Maria Formation outcrops in Paleorrota geopark Agudo. T. riograndensis was similar to Ecteninion lunensis from the Upper Triassic Ischigualasto formation of Argentina, but differed in several respects, including its larger size. It is known from a nearly complete holotype skeleton as well as a referred skull. The holotype skeleton had an estimated length of 1.2 meters (4 feet), while the referred skull was 17% larger than that of the holotype. Trucidocynodon is considered one of the largest known carnivorous cynodonts from the Triassic, as well as one of the largest probainognathians in the entire Mesozoic. [1] [2]

A biomechanical study has argued that Trucidocynodon not only had erect limbs, but that it also possibly had digitigrade forelimbs, being among the first synapsids to show adaptations for cursoriality. However, it was likely not a specialized runner, unlike ungulates and some other modern cursorial mammals. [3]

Chiniquodon is an extinct genus of carnivorous cynodonts, which lived during the Late Triassic (Carnian) in South America and Africa. Chiniquodon is closely related to a contemporary genus, Probelesodon, and close to the ancestry of mammals.

Unaysaurus is a genus of unaysaurid sauropodomorph herbivore dinosaur. Discovered in southern Brazil, in the geopark of Paleorrota, in 1998, and announced in a press conference on Thursday, December 3, 2004, it is one of the oldest dinosaurs known. It is closely related to plateosaurid dinosaurs found in Germany, which indicates that it was relatively easy for species to spread across the giant landmass of the time, the supercontinent of Pangaea. 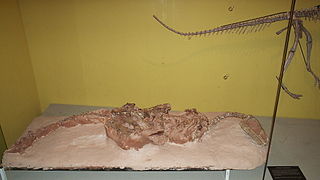 Guaibasaurus is an extinct genus of basal saurischian dinosaur known from the Late Triassic Caturrita Formation of Rio Grande do Sul, southern Brazil. It was possibly a basal theropod or sauropodomorph. In 2016 Gregory S. Paul estimated it at 2 meters and 10 kg, whereas in 2020 Molina-Pérez and Larramendi listed it at 3 meters and 35 kg.

Massetognathus is an extinct genus of plant-eating traversodontid cynodonts. They lived during the Triassic Period about 235 million years ago, and are known from the Chañares Formation in Argentina and the Santa Maria Formation in Brazil. 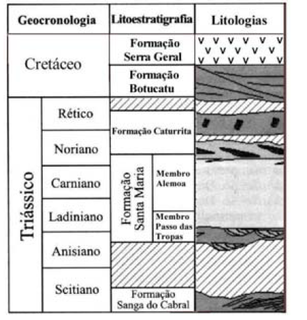 The Santa Maria Formation is a sedimentary rock formation found in Rio Grande do Sul, Brazil. It has a Late Anisian to Early Norian age, and is notable for its fossils of early dinosaurs and other dinosauromorphs, including the herrerasaurid Staurikosaurus, the basal sauropodomorphs Buriolestes and Saturnalia, and the lagerpetid Ixalerpeton. It received this name because it was discovered first in the city of Santa Maria, on the central region of Rio Grande do Sul state.

The Caturrita Formation is a rock formation found in Rio Grande do Sul, Brazil. Its sediments were deposited in the Paraná Basin. The formation is from the Upper Triassic and forms part of the Santa Maria Supersequence in the upper section of the Rosário do Sul Group.

Protuberum is an extinct genus of traversodontid cynodonts known from a single species Protuberum cabralense, from the Middle Triassic of Brazil. 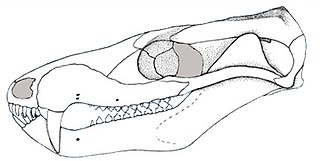 Brasilodon is an extinct genus of cynodonts that lived during the Norian age of the Late Triassic Period, about 228 to 208.5 million years ago. The average length of Brasilodon is approximately 12 cm and weighed about 20 grams. The average size of this cynodont species is about the size of extant mice. Brasilodontids are most likely insectivores due to their teeth. The two species in this genus are B. tetragonus and B. quadrangularis, two very small cynodonts belonging to the family Brasilodontidae.

Riograndia is an extinct genus of tritheledontid cynodonts from the Late Triassic of South America. The type and only species is Riograndia guaibensis. Remains have been found in the Caturrita Formation of the geopark of Paleorrota. It was a small non-mammalian cynodont, with several advanced features also present in mammals. Several specimens of Riograndia guaibensis have been found in the towns of Candelária and Faxinal do Soturno in the Caturrita Formation. The genus defines the Riograndia Assemblage Zone. 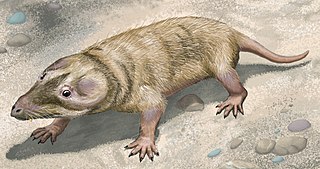 Brasilitherium, from "Brazil" and therium, thus meaning "Brazilian beast", is an extinct genus of cynodonts that lived during the Middle to Late Triassic in what is now Brazil. It was approximately 12 centimetres (4.7 in) long and weighed around 20 grams (0.044 lb). It probably fed on insects. Brasilitherium was found in the Candelária Formation of the Paraná Basin in southeastern Brazil. Brasilitherium represents a transition between advanced cynodonts and mammals, having features of both and having early evolution of certain mammalian features, such as hearing and a nasal cavity.

Chanaresuchus is an extinct genus of proterochampsian archosauriform. It was of modest size for a proterochampsian, being on average just over a meter in length. Fossils are known from the Middle and Late Triassic of La Rioja Provence, Argentina and Rio Grande do Sul, Brazil. The type species and only currently known species is Chanaresuchus bonapartei was named from the Ladinian-age Chañares Formation in 1971. A second species C. ischigualastensis named in 2012 from the late Carnian-age Ischigualasto Formation, was briefly assigned to Chanaresuchus before being moved to its own genus Pseudochampsa in 2014. C. bonapartei has recently been found in the Carnian Santa Maria Formation in Brazil. Chanaresuchus appears to be one of the most common archosauriforms from the Chanares Formation due to the abundance of specimens referred to the genus. Much of the material has been found by the La Plata-Harvard expedition of 1964-65. Chanaresuchus was originally classified in the family Proterochampsidae, although it has been placed in the family Rhadinosuchidae in more recent studies.

Paleontology or palaeontology is the study of prehistoric life forms on Earth through the examination of plant and animal fossils. This includes the study of body fossils, tracks (ichnites), burrows, cast-off parts, fossilised feces (coprolites), palynomorphs and chemical residues. Because humans have encountered fossils for millennia, paleontology has a long history both before and after becoming formalized as a science. This article records significant discoveries and events related to paleontology that occurred or were published in the year 2010.

Teyumbaita is an extinct genus of hyperodapedontine rhynchosaur from the Upper Triassic epoch of Paleorrota, Rio Grande do Sul, southern Brazil. Its fossils, two nearly complete skulls and a partial skull were discovered in the lower part of the Caturrita Formation and was first assigned to a species of Scaphonyx, Scaphonyx sulcognathus. This species was reassigned to its own genus by Felipe Chinaglia Montefeltro, Max Cardoso Langer and Cesar Leandro Schultz in 2010 and the type species is Teyumbaita sulcognathus. Fossil material of a second, yet-unnamed species, is known from the Hoyada del Cerro Las Lajas site of the Ischigualasto Formation (Argentina).

Candelariodon is an extinct genus of carnivorous probainognathian cynodonts from the Middle Triassic Santa Maria Formation of the Paraná Basin in Rio Grande do Sul state, Brazil. Candelariodon is known from a partial mandible having some complete teeth. It was first named by Téo Veiga De Oliveira, Cesar Leandro Schultz, Marina Bento Soares and Carlos Nunes Rodrigues in 2011 and the type species is Candelariodon barberenai.

Pampadromaeus is an extinct genus of basal sauropodomorph dinosaurs known from the Late Triassic (Carnian) Santa Maria Formation of the Paraná Basin in Rio Grande do Sul, southern Brazil.

Ecteniniidae is an extinct family of probainognathian cynodonts from the Triassic of South America. They are notable for their large size, as well as for being among the first synapsids with speciations towards cursoriality.

Polesinesuchus is an extinct genus of stagonolepidid aetosaur known from the Late Triassic of southern Brazil. Fossils have been found from the Santa Maria Supersequence of the late Carnian and early Norian stages, making Polesinesuchus one of the oldest aetosaurs. It contains a single species, Polesinesuchus aurelioi, the fifth aetosaur species known from South America to date. Anatomical evidence suggests that Polesinesuchus likely represents a juvenile individual of the contemporary Aetosauroides.

Aleodon is an extinct genus of cynodonts that lived from the Middle to the Late Triassic. Relatively few analyses have been conducted to identify the phylogenetic placement of Aleodon, however those that have place Aleodon as a sister taxon to Chiniquodon. Two species of Aleodon are recognized: A. brachyramphus which was discovered in Tanzania, and A. cromptoni which was discovered most recently in Brazil.

Macrocollum is a genus of unaysaurid sauropodomorph dinosaur that lived during the Late Triassic period in what is now Brazil. It is one of the oldest dinosaurs known.