Valukkai Aru is a seasonal river in Northern Province, Sri Lanka. [1] It is the only river on the Jaffna Peninsula. The river rises near Tellippalai, before flowing south-west through Kandarodai, Sandilipay and Vaddukoddai. The river empties into Jaffna Lagoon near Araly. [2]

Jaffna Peninsula or is an area in Northern Province, Sri Lanka. It is home to the capital city of the province, Jaffna, and comprises much of the former land mass of the medieval Jaffna kingdom.

The Navaly Church bombing was the bombing of the Church of Saint Peter and Saint Paul in Navaly in the Jaffna peninsula by the Sri Lankan Air Force during the Sri Lankan Civil War. It is estimated that at least 125 civilians, who had taken refuge from the fighting inside the church, died as a result of this incident. The victims included men, women and children.

Uthayan is a Tamil language Sri Lankan daily newspaper published by New Uthayan Publication (Private) Limited, part of the Uthayan Group of Newspapers. It was founded in 1985 and is published from Jaffna. Its sister newspapers is the Colombo based Sudar Oli. Uthayan was the only newspaper published from Jaffna which did not cease publication due to the civil war. The newspaper has been attacked several times, a number of its staff have been murdered by paramilitary groups and other forces, and it regularly receives threats.

The Battle of Jaffna was a battle fought in two phases in August and October 2006 for the Jaffna peninsula. It was the fourth battle for the peninsula since the start of the Sri Lankan civil war.

The American Ceylon Mission (ACM) to Jaffna, Sri Lanka started with the arrival in 1813 of missionaries sponsored by the American Board of Commissioners for Foreign Missions (ABCFM). The British colonial office in India and Ceylon restricted the Americans to the relatively small Jaffna Peninsula for geopolitical reasons for almost 40 years. The critical period of the impact of the missionaries was from the 1820s to early 20th century. During this time, they engaged in original translations from Englis

Operation Riviresa, was a combined military operation launched by the Sri Lankan Armed Forces in Jaffna. Starting on the 17 October 1995, the primary objective of the operation was the capture of the city of Jaffna and rest of the Jaffna peninsula from the LTTE. It is believed that Operation Riviresa was the largest and most successful military operation in Sri Lankan Armed Forces during the Third Eelam War.

The Vanni chieftaincies or Vanni principalities was a region between Anuradhapura and Jaffna, but also extending to along the eastern coast to Panama and Yala, during the Transitional and Kandyan periods of Sri Lanka. This land was a collection of chieftaincies of principalities that were a collective buffer zone between the Jaffna Kingdom, in the north of Sri Lanka, and the Sinhalese kingdoms in the south. The emergance of these chieftaincies were a direct result of the breakdown of central authority and the collapse of the Kingdom of Polonnaruwa in the 13th century, as well as the establishment of the Jaffna Kingdom in the Jaffna Peninsula. Control of this area was taken over by dispossessed Sinhalese nobels and chiefs of the South Indian military of Māgha of Kalinga (1215–1236), whose 1215 invasion of Polonnaruwa led to the kingdom's downfall. Sinhalese chieftaincies would lay on the northern border of the Sinhalese kingdom while the Tamil chieftaincies would border the Jaffna Kingdom and the remoter areas of the eastern coast, outside of the control of either kingdom.

Kiddinan Sivanesan was a Sri Lankan Tamil politician and former Member of Parliament. He was killed by a roadside bomb alleged to have been placed by the Sri Lanka Army's Long Range Reconnaissance Patrol.

Valvettithurai Urban Council is the local authority for the town of Valvettithurai in northern Sri Lanka. VUC is responsible for providing a variety of local public services including roads, sanitation, drains, housing, libraries, public parks and recreational facilities. It has 9 members elected using the open list proportional representation system. 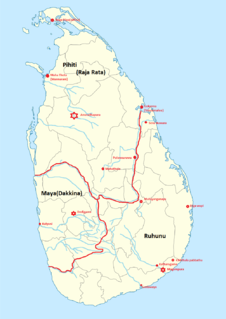