Yoga Journal is a website and digital journal, formerly a print magazine, [3] on yoga as exercise founded in California in 1975 with the goal of combining the essence of traditional yoga with scientific understanding. It has produced live events and materials such as DVDs on yoga and related subjects.

The magazine grew from the California Yoga Teachers Association's newsletter, which was called The Word. Yoga Journal has repeatedly won Western Publications Association's Maggie Awards for "Best Health and Fitness Magazine". It has however been criticized for representing yoga as being intended for affluent white women; in 2019 it attempted to remedy this by choosing a wider variety of yoga models. The magazine was acquired by Outside in 2020. [4]

Yoga Journal was started in May 1975 by the California Yoga Teachers Association (CYTA), with Rama Jyoti Vernon as President, William Staniger as the founding editor, and Judith Lasater on the board and serving as copy editor. Their goal was to combine "the essence of classical yoga with the latest understandings of modern science." The journal grew from the CYTA's newsletter, which had been called The Word. Initially, the journal was staffed by volunteers, and contributors were unpaid. The first issue's 300 copies were personally distributed by the founders. [5] [6]

Forbes has called the Yoga Journal website "the Web's most expansive and impressive Yoga site." [9]

Yoga Journal runs features on the themes of yoga, food and nutrition, fitness, wellness, and fashion and beauty. Its website offers definitions and advice on yoga styles and equipment, with directions for how to practise over a hundred asanas or yoga poses. Readers can select asanas by their name, their type, such as forward bends or hip-opening poses; by anatomical area, such as knees or lower back; or by claimed benefit, such as for anxiety or digestion. [9]

The journalist Stefanie Syman calls the magazine's language that "of science and physiology, of diet and blood pressure". [10] In her view, the journal uses "highly clinical-sounding language" [10] even when covering "more mystical topics"; [10] it stresses the use of yoga as therapy. [11] Syman notes that the journal's coverage was "eclectic", especially noticeable in its calendar and classified advertisements. [12] The magazine covers topics beyond exercise; early in the journal's history, in 1976, it published the guru Ram Dass's confession. [13] Yoga Journal's 2012 survey, Yoga in America found the yoga market to be worth more than $10 billion per year. The data, collected by the Harris Interactive Service Bureau (HISB), showed that 20.4 million people practiced yoga in America at that time. [14] There are 12 international editions, published in Australia, China, France, Germany, Italy, Japan, Korea, Russia, Singapore, Spain, Thailand and Turkey. [15]

The magazine is accompanied by a program of live events, led by well-known yoga teachers and gurus such as Cyndi Lee, Judith Hanson Lasater, Kino MacGregor and Gurmukh Kaur Khalsa. [16] [17] The events have included an annual yoga conference, held in venues around the United States, which combined practical sessions and talks. [18] [17]

The social historian Sarah Schrank records that co-founder Judith Lasater "made waves" [19] with her public criticism of the magazine in 2010; in Lasater's view, "photos of naked or half-naked women ... do not teach the viewer about yoga practice or themselves. They aren't even about the celebration of the beauty of the human body or the beauty of the poses [ asanas], which I support. These ads are just about selling a product." [19]

The journalist Rosalie Murphy, writing in The Atlantic in 2014, stated that Yoga Journal and similar yoga magazines are illustrated in "nearly every spread" with a thin woman, nearly always white; the image of yoga that is conveyed is, she argues, that yoga is intended for affluent white women. Murphy notes that the apparent stereotype is grounded in reality: in a 2012 study by Yoga Journal itself, over 80% of American practitioners of yoga were white. [20] The scholars Agi Wittich and Patrick McCartney wrote in 2020 that the image of contemporary yoga is the idealized, fit, young, slim, white, female yoga body, commercialized on the covers of glossy magazines such as Yoga Journal, and that non-lineage yoga evolved in reaction against that image. [21]

In January 2019, Yoga Journal exceptionally published two covers for the magazine, one showing a slim white woman, the other showing a larger black woman, both accompanied by a headline "The Leadership Issue", intended to examine the evolution of yoga and the part played by "lineage, social media, and power dynamics." [22] The pair of covers drew a strong response, [23] [24] leading the journal's brand director, Tasha Eichenseher, to respond with an apology that "we caused harm" [22] to "communities that have been disproportionately excluded from yoga", [22] and an explanation that she was "working to make Yoga Journal more representative—regarding age, race, ability, body type, yoga style, gender, and experience." [22]

Iyengar Yoga, named after and developed by B. K. S. Iyengar, and described in his bestselling 1966 book Light on Yoga, is a form of yoga as exercise that has an emphasis on detail, precision and alignment in the performance of yoga postures (asanas). 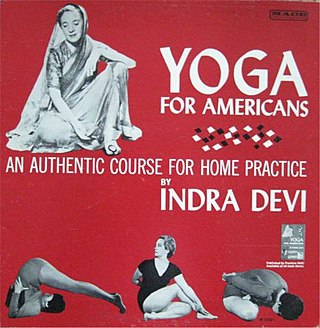 Eugenie Peterson, known as Indra Devi, was a pioneering teacher of yoga as exercise, and an early disciple of the "father of modern yoga", Tirumalai Krishnamacharya. 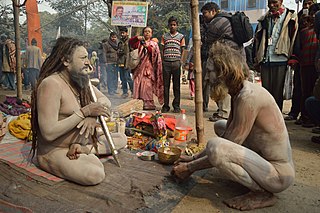 Naked yoga is the practice of yoga without clothes. It has existed since ancient times as a spiritual practice, and is mentioned in the 7th-10th century Bhagavata Purana and by the Ancient Greek geographer Strabo.

Shavasana, Corpse Pose, or Mritasana, is an asana in hatha yoga and modern yoga as exercise, often used for relaxation at the end of a session. It is the usual pose for the practice of yoga nidra meditation, and is an important pose in Restorative Yoga.

Judith Lasater is an American yoga teacher and writer in the San Francisco Bay Area, recognized as one of the leading teachers in the country.

Yin Yoga is slow-paced style of yoga as exercise, incorporating principles of traditional Chinese medicine, with asanas (postures) that are held for longer periods of time than in other styles. Advanced practitioners may stay in one asana for five minutes or more. The sequences of postures are meant to stimulate the channels of the subtle body known as meridians in Chinese medicine and as nadis in Hatha yoga. 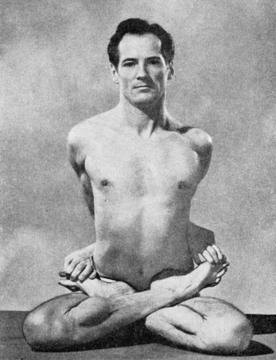 Theos Casimir Hamati Bernard (1908–1947) was an explorer and author, known for his work on yoga and religious studies, particularly in Tibetan Buddhism. He was the nephew of Pierre Arnold Bernard, "Oom the Omnipotent", and like him became a yoga celebrity.

The Jivamukti Yoga method is a proprietary style of yoga created by David Life and Sharon Gannon in 1984.

Yoga as exercise is a physical activity consisting mainly of postures, often connected by flowing sequences, sometimes accompanied by breathing exercises, and frequently ending with relaxation lying down or meditation. Yoga in this form has become familiar across the world, especially in America and Europe. It is derived from medieval Haṭha yoga, which made use of similar postures, but it is generally simply called "yoga". Academics have given yoga as exercise a variety of names, including modern postural yoga and transnational anglophone yoga.

Jessamyn Stanley is a yoga teacher and body positivity advocate and writer. She gained recognition through her Instagram posts showing her doing yoga as a "plus-size woman of color," who self-identifies as a "fat femme" and "queer femme." She is the author of the book Every Body Yoga: Let Go of Fear, Get On the Mat, Love Your Body.

Hatha Yoga: The Report of a Personal Experience is a 1943 book by Theos Casimir Bernard describing what he learnt of hatha yoga, ostensibly in India. It is one of the first books in English to describe and illustrate a substantial number of yoga poses (asanas); it describes the yoga purifications (shatkarmas), yoga breathing (pranayama), yogic seals (mudras), and meditative union (samadhi) at a comparable level of detail.

The Path of Modern Yoga: The History of an Embodied Spiritual Practice is a 2016 history of the modern practice of postural yoga by the yoga scholar Elliott Goldberg. It focuses in detail on eleven pioneering figures of the transformation of yoga in the 20th century, including Yogendra, Kuvalayananda, Pant Pratinidhi, Krishnamacharya, B. K. S. Iyengar and Indra Devi.

Modern yoga as exercise has often been taught by women to classes consisting mainly of women. This continued a tradition of gendered physical activity dating back to the early 20th century, with the Harmonic Gymnastics of Genevieve Stebbins in America and Mary Bagot Stack in Britain. One of the pioneers of modern yoga, Indra Devi, a pupil of Krishnamacharya, popularised yoga among American women using her celebrity Hollywood clients as a lever.

Restorative Yoga is the practice of asanas, each held for longer than in conventional yoga as exercise classes, often with the support of props such as folded blankets, to relax the body, reduce stress, and often to prepare for pranayama.

Janice Gates was a teacher of yoga as exercise and mindful yoga, known for her emphasis on the power of yoginis, women in yoga and her work in yoga therapy.

Yoga in the United States has a long history, foreshadowed in the 19th century by the philosophers Ralph Waldo Emerson, whose poem "Brahma" is a statement of the Hindu philosophy behind yoga, and Henry David Thoreau, and starting in earnest with the Hindu leader Vivekananda's visit from India in 1893; he presented yoga as a spiritual path without postures (asanas), very different from modern yoga as exercise. Two other early figures, however, the women's rights advocate Ida C. Craddock and the businessman and occultist Pierre Bernard, created their own interpretations of yoga, based on tantra and oriented to physical pleasure. 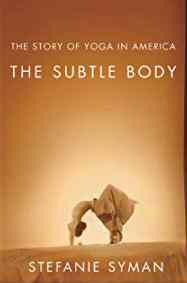 The Subtle Body: The Story of Yoga in America is a 2010 book on the history of yoga as exercise by the American journalist Stefanie Syman. It spans the period from the first precursors of American yoga, Ralph Waldo Emerson and Thoreau, the arrival of Vivekananda, the role of Hollywood with Indra Devi, the hippie generation, and the leaders of a revived but now postural yoga such as Bikram Choudhury and Pattabhi Jois. 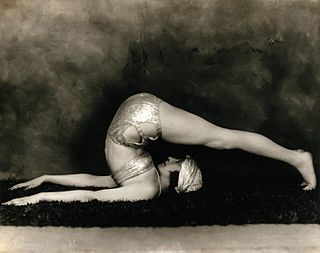 Marguerite Agniel was a Broadway actress and dancer, and then a health and beauty guru in New York in the early 20th century. She is known for her 1931 book The Art of the Body: Rhythmic Exercise for Health and Beauty, one of the first to combine yoga and nudism.

Accessible yoga is a form of modern yoga as exercise with adapted asanas designed to be suitable for people who are unable to follow a standard yoga class through age, illness, or disability. It includes various forms of what has been called Chair Yoga, and has also been described as adaptive yoga.