The Buick Standard Six Series 20 was manufactured by Buick at the Flint Wagon Works factory of Flint, Michigan, and was the junior model to the Buick Master Six between 1925 through 1929, and shared the GM A platform with Oldsmobile, Oakland and Chevrolet. [2] [1] The Standard Six evolved from the earlier Buick Six when the Buick 4-cylinder was cancelled. The Standard Six was the most popular Buick sold while being more upscale to the Oldsmobile Six. It was the senior brand to Marquette under the General Motors Companion Make Program until Marquette was cancelled one year later. It replaced the earlier Buick Six that was introduced in 1916, and was replaced with the Buick Series 50. Coachwork continued to be offered by Fisher Body who was the primary supplier of all GM products at this time, and Duco automotive lacquer paint, introduced by DuPont was the first quick drying multi-color line of nitrocellulose lacquers made especially for the automotive industry. [1]

LaSalle was an American brand of luxury automobiles manufactured and marketed, as a separate brand, by General Motors' Cadillac division from 1927 through 1940. Alfred P. Sloan, GM's Chairman of the Board, developed the concept for four new GM marques brands - LaSalle, Marquette, Viking and Pontiac - paired with already established brands to fill price gaps he perceived in the General Motors product portfolio. Sloan created LaSalle as a companion marque for Cadillac. LaSalle automobiles were manufactured by Cadillac, but were priced lower than Cadillac-branded automobiles, were shorter, and were marketed as the second-most prestigious marque in the General Motors portfolio. LaSalles were titled as LaSalles, and not as Cadillacs.

The Cadillac V-63 is a large luxury automobile that was introduced in September 1923 by Cadillac as a 1924 model, replacing the previous Type 61. It used the GM C platform and was replaced by the Cadillac Series 355 in 1931. It retained the name Cadillac V8 introduced with the previous generation Cadillac Type 51. 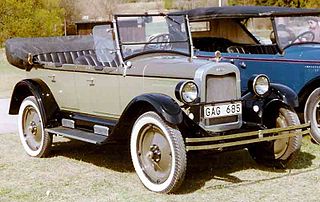 The Chevrolet Superior Series F was launched in 1923, manufactured by Chevrolet for four years with a different series per year. The 1923 model was known as the Series B, the 1924 model was the Series F, for 1925 it was known as the Series K and the 1926 Superior was known as the Series V. It was replaced in 1927 by the Series AA Capitol. It was the first Chevrolet that didn't have a larger companion model and was the only car sold by Chevrolet in several body style configurations all supplied by Fisher Body. Each year new mechanical changes, appearance updates or optional features that became standard in subsequent years became expected of all GM products including Chevrolet. Body styles were separated into open and closed which meant closed included retractable glass in the doors and glass surrounding rear seat passengers. Standard items included tools, a jack for tire removal, speedometer, outside lockable door handles, ammeter, oil pressure gauge, dashboard light, choke pull knob, electric horn, ignition theft lock, and a two piece vertical ventilating windshield that allowed fresh air to enter the passenger compartment. Wheels were 30" and came standard with hickory wood spokes or optional pressed steel discs. For 1925, bumpers were offered optionally along with outside side view mirrors, heater for passenger compartment and a clock. 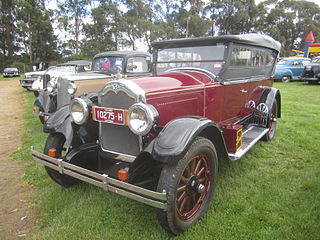 The Buick Master Six Series 40 and Series 50, based on the wheelbase used, was an automobile built by Buick from 1925 to 1928 and shared the GM B platform with the Oldsmobile Model 30. Previously, the company manufactured the Buick Six that used the overhead valve six-cylinder 242 cu in (4.0 L) engine in their high-end cars, and the Buick Four for smaller, less-expensive cars. Starting with 1918, they dropped the four-cylinder engine and designed a small six, which they called the Buick Standard Six, to replace that end of the market. They coined the name "Master Six" for the high-end cars, now powered by the 255 cu in (4.2 L) engine released the year before. The yearly changes were a result of a new business philosophy called planned obsolescence

The Buick 4 was a series of passenger cars produced by the Buick Division of GM from 1909 through 1918, and was available as a touring car, phaeton or roadster. It was available with the Buick Model B as a larger alternative offering a larger engine and better durability. It became the junior sedan in 1914 when the Buick Six was introduced. 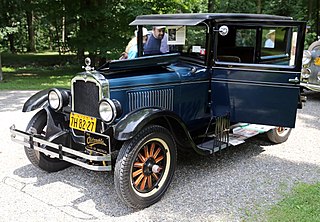 The Oldsmobile Model 30, which continued to be known as the Oldsmobile Six, was built from the 1923 through 1927. Each year it was built, it was given the suffix 30-A, 30-B, 30-C, 30-D and 30-E for the last year of production, all having been manufactured in Lansing, Michigan. General Motors used the GM A platform, shared with the Buick Standard Six and the Oakland Six, and the yearly changes were the result of a new business philosophy called planned obsolescence. The Model 30 was Oldsmobile mid-level product and introduced the flathead Oldsmobile straight-6 engine, while the Oldsmobile Model 43 with a four cylinder engine remained the entry level product. When the top level Oldsmobile Light Eight, with the flathead Oldsmobile V8 engine was cancelled in 1923, the Oldsmobile Six became the top level vehicle. It replaced the Oldsmobile Model 37 introduced in 1917, and was replaced by the Oldsmobile F-Series introduced in 1928. In 5 years, 236,474 cars were built. The growing popularity of GM's brands, like Oldsmobile, contributed to becoming the largest automobile manufacturer when sales overtook the Ford Motor Company during this time period. Coachwork for the various bodystyles were supplied by Fisher Body of Detroit, MI, and starting with the 1923 model year, all GM products adopted a shared appearance, with brand specific unique appearance features. The retail price had dropped considerably from previous years due to the popularity and affordability of the Ford Model T, with the top level sedan at US$1,095.

The Model 42 was an entry-level four seat passenger car produced by GM's Oldsmobile Division in 1914, offered as a replacement to the Oldsmobile Curved Dash runabout when it was discontinued in 1908, and was the junior platform to the Oldsmobile Six introduced in 1913. GM had acquired Elmore Manufacturing Company, Oldsmobile and Oakland Motor Car Company in 1908 and Cartercar and Rainier Motor Car Company in 1909 as their entry-level models, and Oldsmobile products were being repositioned in their new hierarchy as GM began to consolidate operations after William Durant had left.

The Model 43 was an entry-level four seat passenger car produced by GM's Oldsmobile Division in 1915 and 1916, then again in 1921 and 1922. It replaced the Model 42 also known as the "Baby Olds", while the most significant improvement was a longer wheelbase shared with the Buick Series C. Until GM assumed control of Chevrolet in 1917, the previous Model 42 and the Model 43 were GM's entry-level cars which led to the interrupted production of the Model 43 as Oldsmobile was promoted as a higher content product. It was also known as the "Oldsmobile Four" and competed with the Chevrolet Series H as an entry-level model until GM bought Chevrolet. It was the junior level product to the upscale Oldsmobile Light Eight. It was Oldsmobile's last four-cylinder car until 1977 with the Oldsmobile Starfire. 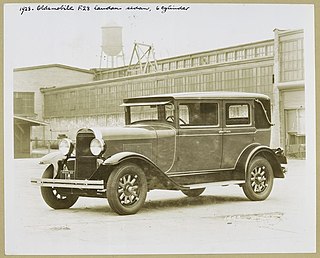 The Oldsmobile Light Eight was an automobile produced by the Oldsmobile Division of General Motors in roadster, two-door coupe, four-door sedan form between 1916 and 1923. It was powered by an sidevalve V8 engine, the maker's first, and shared with the 1916 Oakland Model 50.

The Oakland Six was the first six-cylinder engine offered by the Oakland Motor Company in 1913 which became a division of General Motors in 1909. The Oakland Six was offered in many different model names that changed every year, along with several body styles and engine displacements until 1929, when the V8 was reintroduced, then in 1931 Oakland was renamed Pontiac. When Oakland became a division of GM and introduced the Oakland Four, Oldsmobile and Buick shared bodywork and chassis of their six-cylinder models with Oakland. When Chevrolet became part of GM in 1917, Oakland chassis and bodywork were shared with Chevrolet. Manufacture of the Oakland was completed in Pontiac, Michigan.