Located on the northeastern tip of Ellesmere Island, Alert is the northernmost continuously inhabited place in the world. [6] It takes its name from HMS Alert, which wintered 10 km (6.2 mi) east of the present station off what is now Cape Sheridan, Nunavut in 1875–1876. [7] The entire population of Baffin, Unorganized, part of the Baffin Region, the Statistics Canada name for Qikiqtaaluk, resides here. As of the 2016 Canadian census the population was 62, an increase of 1,140 per cent over the 2011 census. [4]

Alert, then in Canada's Northwest Territories, was first settled April 9, 1950, when the first staff for the Joint Arctic Weather Station (JAWS) arrived and began construction. Since the beginning of the JAWS project, the Canadian military had been interested in the establishment at Alert for several reasons: the JAWS facility extended Canadian sovereignty over a large uninhabited area which Canada claimed as its sovereign territory, and furthermore, its proximity to the Soviet Union made it of strategic importance. Alert is closer to Moscow (c. 4,000 km [2,500 mi]) than it is to the capital Ottawa (c. 4,150 km [2,580 mi]). Thus, the possibility of using the site for intercepting radio signals was deemed to warrant a military presence.

In 1956, the Royal Canadian Air Force (RCAF), which was expanding its presence throughout the high Arctic with the construction of the Distant Early Warning Line radar network, established a building uphill from the Department of Transport's JAWS station to house "High Arctic Long Range Communications Research", or signals intelligence operations.

In 1957, Alert Wireless Station was conceived as an intercept facility to be jointly staffed by personnel from the Royal Canadian Navy (RCN) and the RCAF. Five additional buildings were constructed: a mess, three barracks, and a power house and vehicle maintenance building, in addition to the existing operations building, built in 1956. The operations building housed the radio intercept and cryptographic equipment. On 1 September 1958 control of the station was transferred from the RCAF to the Canadian Army and it officially began operations.

The following decade saw a dramatic expansion of the station with a correspondingly greater number of personnel stationed there. The 1 February 1968 unification of the RCN, RCAF, and army to form the Canadian Armed Forces saw Alert Wireless Station change its name to Canadian Forces Station Alert (CFS Alert). Its personnel were no longer drawn from only the air force or navy, but primarily from the Canadian Forces Communications Command.

At its peak, CFS Alert had upwards of 215 personnel posted at any one time. The station became a key asset in the global ECHELON network of the US-UK-CAN-AUS-NZ intelligence sharing alliance, with Alert being privy to many secret Soviet communications regarding land-based and sea-based ICBM test launches and many operational military deployments.

The first military women to serve in Alert arrived in 1980 as part of the Canadian Forces' Women In Non-Traditional Roles study. After its completion in 1983, women were fully authorized to serve in all roles. [8] The first female commanding officer was Major Cathy Cowan, who took command in January 1996. The first female Station Warrant Officer (SWO), Master Warrant Officer Renee Hansen, was appointed in December 2017. [9]

Budget cuts to the Department of National Defence (DND) and Canadian Forces in 1994, and modernization of communications equipment, saw CFS Alert downsized to approximately 74 personnel by 1997–1998 when most radio-intercept operations were remotely controlled by personnel at CFS Leitrim. Remaining personnel are responsible for airfield operations, construction/engineering, food service, and logistical/administrative support. Only six persons are now responsible for actual operations, and control of the facility was passed to DND's Information Management Group following the disbanding of CF Communications Command with force restructuring and cutbacks in the mid-1990s. Several of these personnel are likely also attached to DND's Communications Security Establishment.

As of 13 April 2006 [update] the Canadian Broadcasting Corporation reported that station heating costs had risen, leading the military to cut back on support trade positions by using private contractors. [10] By 2008, maintenance operations on station (including food and housekeeping services, vehicle maintenance, power plant operation, and heating, electrical, and plumbing) had been transferred to a civilian contractor. The contract was initially awarded to Canadian Base Operators (CBO), a subsidiary of Black & McDonald. In 2012, the contract was won by Nasittuq, a subsidiary of ATCO.

The main building consists of five halls; Churchill Hall contains the administrative and main amenities on the station, such as a gathering area called the "beach", a dining room called Igloo Gardens, library, barber shop, radio station, post office, and a store. Chimo, Ladner, and Whitehorse halls are the three barrack blocks, which each barrack block containing three sections. Polaris Hall contains the operations branch. All halls and barrack blocks are connected by a linkway. Because of the cold climate, the doors leading in and out of the main building are the same as those for walk-in refrigerators. [11]

Canadian Forces Station Debert was a Canadian Forces station located in Debert, Nova Scotia. It was most recently used during the Cold War as a communications facility and was home to a "Regional Emergency Government Headquarters" (REGH) complex, more commonly known by their nickname "Diefenbunker."

Debert is an unincorporated farming community in Nova Scotia, Canada. Located in the central-western part of Colchester County, it is approximately 20 km (12 mi) west of Truro. 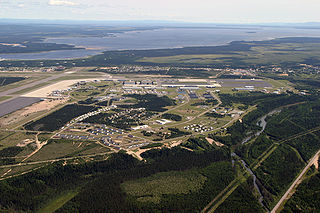 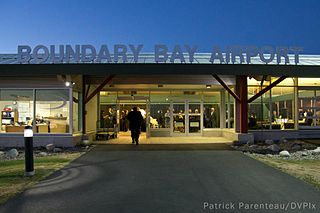 Boundary Bay Airport or Vancouver/Boundary Bay Airport is located beside Boundary Bay and 2.5 nautical miles east of Ladner in Delta, British Columbia, Canada, 8.5 NM south southeast of Vancouver and close to the Point Roberts-Boundary Bay border crossing. The airport, which opened on July 11, 1983, serves mostly general aviation and includes facilities for aircraft maintenance, flight training and parking. In 2020 and 2021, Boundary Bay airport was ranked as the busiest airport in Canada by aircraft movements. 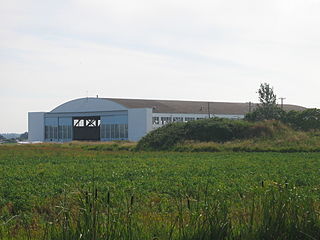 Canadian Forces Station Ladner is a former military airfield and communications station located beside Boundary Bay and 2.5 nautical miles east of Ladner in Delta, British Columbia, Canada, south of Vancouver and close to the U.S. border. After its closure it was reopened as Boundary Bay Airport. 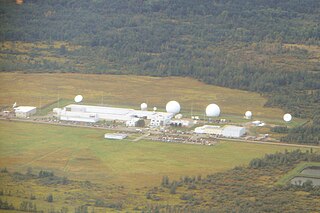 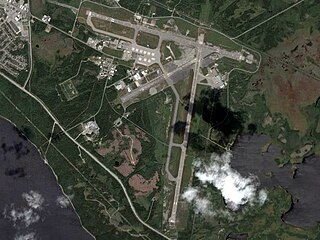 Canadian Forces Base Gander, is a Canadian Forces base located in Gander, Newfoundland and Labrador. It is operated as an air force base by the Royal Canadian Air Force and is home to search and rescue operations that cover a vast swath of the western North Atlantic and southern Arctic and a Canadian Coastal Radar station amongst other things. It is home to 9 Wing Gander.

Canadian Forces Station Saglek is a Canadian Forces Air Command radar base in the former Pinetree Line and currently part of the North Warning System, located near Saglek Bay in Newfoundland and Labrador, 367.7 miles (591.8 km) north-northwest of CFB Goose Bay.

Canadian Forces Station Lowther is a closed General Surveillance Radar station. It is located 12.7 miles (20.4 km) east-southeast of Mattice-Val Côté, Ontario. It was closed in 1987. 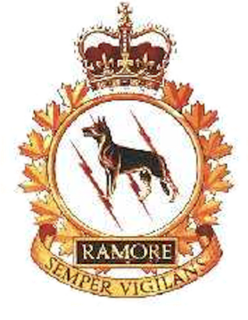 Canadian Forces Station Ramore is a closed General Surveillance Radar station. It is located 4 miles (6.4 km) east of Ramore, Ontario. It was closed in 1974. It was operated as part of the Pinetree Line network controlled by NORAD. It has since been sold and is now private property.

Wikimedia Commons has media related to CFS Alert .
This page is based on this Wikipedia article
Text is available under the CC BY-SA 4.0 license; additional terms may apply.
Images, videos and audio are available under their respective licenses.