Eureka is a small research base on Fosheim Peninsula, Ellesmere Island, Qikiqtaaluk Region, in the Canadian territory of Nunavut. It is located on the north side of Slidre Fiord, which enters Eureka Sound farther west. It is the third-northernmost permanent research community in the world. The only two farther north are Alert, which is also on Ellesmere Island, and Nord, in Greenland. Eureka has the lowest average annual temperature [7] and the lowest amount of precipitation of any weather station in Canada.

The base consists of three areas:[ citation needed ]

PEARL is operated by a consortium of Canadian university researchers and government agencies known as the Canadian Network for Detection of Atmospheric Change. [9] PEARL announced it would cease full-time year-round operation as of April 30, 2012, due to lack of funding, but this decision was reversed in May 2013 with the announcement of new funds. [10]

Eureka was founded on April 7, 1947, as part of an initiative to set up a network of Arctic weather stations. [11] On this date, 100 t (98 long tons; 110 short tons) of supplies were airlifted to a promising spot on Ellesmere Island, and five prefabricated Jamesway huts were constructed. Regular weather observations began on January 1, 1948. The station has expanded over the years. At its peak, in the 1970s, at least fifteen staff were on site; in 2005, it reported a permanent population of zero with at least 8 staff on a continuous rotational basis.[ citation needed ]

Several generations of buildings have been developed. The latest operations centre, with work areas and staff quarters in one large structure, was completed in 2005.[ citation needed ]

The complex is powered by diesel generators. The station is supplied once every six weeks with fresh food and mail by air, and annually in the late summer, a supply ship from Montreal brings heavy supplies. On July 3, 2009, a Danish Challenger 604 MMA jet landed at Eureka's aerodrome. [12] The jet is a military observation aircraft based on the Challenger executive jet. This jet visited Eureka on a familiarization trip, in order to prepare for the possibility of Danish aircraft assisting in search and rescue missions over Canadian territory. The Canadian American Strategic Review noted critically that the first jet to fly a mission to Eureka was not Canadian.[ citation needed ]

At Eureka's latitude, a geosynchronous communications satellite, if due south, would require an antenna to be pointed nearly horizontally; satellites farther east or west along that orbit would be below the horizon. Telephone access and television broadcasts arrived in 1982 when Operation Hurricane resulted in the establishment of a satellite receiving station at nearby Skull Point, which has an open view to the south. The low power Channel 9 TV transmitter at Skull Point was the world's most northern TV station at the time. In the 1980s, TV audio was often connected to the telephone to feed CBC-TV news to CHAR-FM in isolated CFS Alert. More recently, CANDAC has installed what is likely the world's most northerly geosynchronous satellite ground-station to provide Internet-based communications to PEARL.[ citation needed ]

Other inhabited places on Ellesmere Island include Alert [13] and Grise Fiord.

Eureka has been described as "The Garden Spot of the Arctic" due to the flora and fauna abundant around the Eureka area, more so than anywhere else in the High Arctic. Fauna include muskox, Arctic wolves, Arctic foxes, Arctic hares, and lemmings. In addition, summer nesting geese, ducks, owls, loons, ravens, gulls and many other smaller birds nest, raise their young, and return south in August.[ citation needed ]

Eureka experiences a polar climate ( ET ). The settlement sees the midnight sun between April 10 and August 29, with no sunlight at all between mid-October and late February. Eureka has the lowest average annual temperature and least precipitation of any weather station in Canada with an annual mean temperature of −18.8 °C (−1.8 °F). However, summers are slightly warmer than other places in the Canadian Arctic because Eureka is somewhat landlocked, being near the centre of Ellesmere Island. Even so, since record keeping began, the temperature has never exceeded 20.9 °C (69.6 °F), first reached on July 14, 2009. [14] Although a polar desert, evaporation is also very low, which allows the limited moisture to be made available for plants and wildlife.[ citation needed ] Its frost-free season averages 56 days, much longer than many other places nearby. [14] 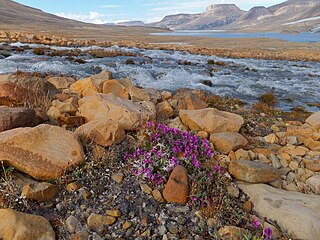 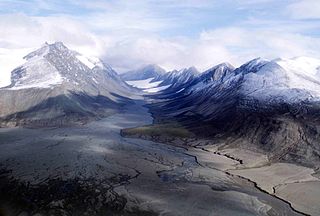 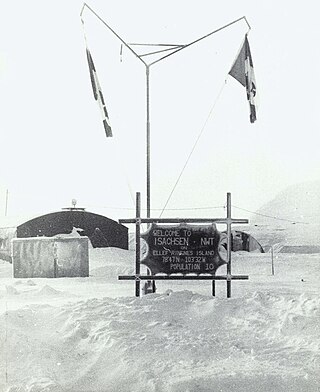 Isachsen is a remote Arctic research-weather station named after the Norwegian explorer of the Arctic, Gunnar Isachsen. It is on the western shore of Ellef Ringnes Island in the Sverdrup Islands, in the territory of Nunavut in Canada. Isachsen Station was established to participate in a joint Canadian-American weather observation program. Isachsen Station operated from April 3, 1948, through September 19, 1978. Regular weather observations began on May 3, 1948. In October 1949, a Douglas C-47 Skytrain crash-landed near the station. No one was killed, but three on board were injured. The wreckage has been preserved by the cold weather and dry conditions. 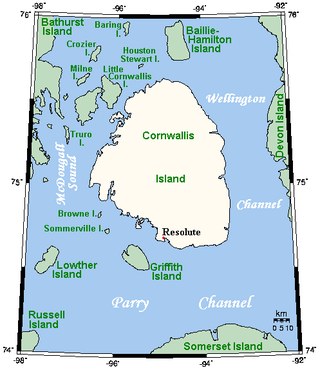 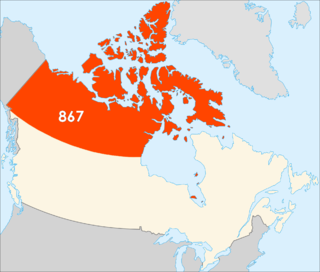 Area code 867 is the area code in the North American Numbering Plan (NANP) for the three Canadian territories, all of which are in Northern Canada. The area code was created on October 21, 1997, by combining numbering plan areas (NPAs) 403 and 819. As the least populated NPA in mainland North America, serving about 100,000 people, it is geographically the largest, at 3,921,739 km2 (1,514,192 sq mi), with Alaska a distant second.

The Canadian territory of Nunavut covers about 1.9 million square kilometres of land and water including part of the mainland, most of the Arctic islands, and all of the islands in Hudson Bay, James Bay, and Ungava Bay which belonged to the Northwest Territories. This makes it the fifth largest country subdivision in the world. If Nunavut were a country, it would rank 13th in area, after the Democratic Republic of the Congo. Nunavut has land borders with Manitoba, the Northwest Territories on several islands as well as the mainland, and a tiny land border with Newfoundland and Labrador on Killiniq Island.

Alexandra Fiord is a natural inlet on the Johan Peninsula of Ellesmere Island in the Qikiqtaaluk Region of Nunavut, Canada. To the east, it opens into Buchanan Bay. 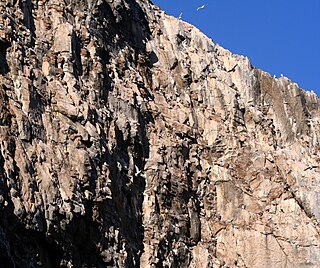 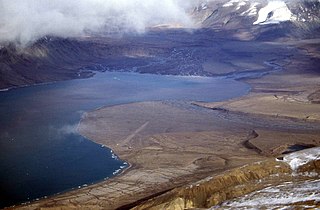 Tanquary Fiord is a fjord on the north coast of the Arctic Archipelago's Ellesmere Island, Nunavut, Canada. It is located in the Quttinirpaaq National Park and extends 30 mi (48 km) in a north-westerly direction from Greely Fiord.

Strathcona Fiord is a fiord on the west central coast of Ellesmere Island, the most northern island within the Arctic Archipelago, Nunavut, Canada.

The Margaret Formation is a geologic formation of the Eureka Sound Group in the Sverdrup Basin in Northwest Territories and Nunavut, Canada. The unit belonging to the Eureka Sound Group which crops out at Ellesmere Island preserves fossils dating back to the Early Eocene period, or Wasatchian in the NALMA classification.

McGill Arctic Research Station (MARS) is a small research station operated by McGill University located near the centre of Axel Heiberg Island, Nunavut. It is located approximately 115 km (71 mi) southwest of Eureka, a weather and research station. It was first established in 1959 after scientists explored South Fiord. The station contains a small hut, a cook house and two temporary structures. It can support 8-12 people and gives them access to the research activities. The current activities are glaciology, climate change, permafrost, hydrology, geology, geomorphology, limnology, planetary analogues, and microbiology. Today, the station is only used in the summer months so there would be enough power generated from the solar panels. 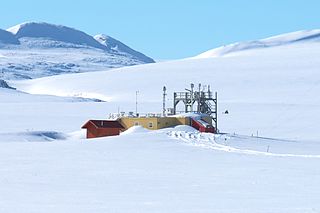 Kimberly "Kim" E. Strong is an atmospheric physicist and the first woman to serve as chair of the Department of Physics at the University of Toronto. Her research involves studying stratospheric ozone chemistry, climate, and air quality using ground-based, balloon-borne and satellite instruments. 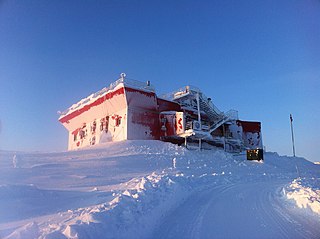 The Polar Environment Atmospheric Research Laboratory (PEARL) is an atmospheric research facility in the Canadian High Arctic, located on Ellesmere Island, Nunavut. Considered one of the most important Arctic research labs in the world, it was the subject of international media attention when it almost closed due to funding cuts by the Canadian Federal Government in 2012.