Castle Hill is an area containing the remains of both French and British fortifications, overlooking the town of Placentia (French: Plaisance) in Newfoundland and Labrador, Canada. The site was originally established in order to protect the French fishing interests in Newfoundland and the approaches to the French colony of Canada.

During King William's War, on 25 February 1690, 45 British freebooters from Ferryland led by Herman Williamson attacked Plaisance by land. After killing two soldiers and wounding governor Louis de Pastour de Costebelle, they took possession of the town and destroyed the fort. The population was imprisoned in the church for six weeks, until the English left on 5 April with the colony's supplies. [2]

The French replaced former Fort Plaisance with Fort Saint-Louis (1691), with 50 French soldiers. In the fall of 1692, in the Battle of Placentia (1692), under the command of Commodore Thomas Gillam (Williams), five English ships armed with 62 cannon and 800 men. The English damaged several houses with cannon fire, and on 23 September the fleet withdrew. [3] The French made attacks on St. John's in 1692 and 1694.

Fort Royal was built in 1693. [4] [5] French forces successfully raided British settlements during times of war while Fort Royal, atop Castle Hill, protected the colony from attack by British warships. At the end of 1693 the garrison had about 60 soldiers. Governor Jacques-François de Monbeton de Brouillan (1691–97) mobilized a frigate and eight ships to attack English Newfoundland. He took possession of about 30 fishing boats, captured prisoners and seized a large amount of fish. De Monbeton was joined on this expedition by Pierre Le Moyne d'Iberville, who marched overland from Plaisance to spearhead a punishing attack on the English settlements in a famous Avalon Peninsula Campaign. A strong British relief force of 1500 troops reoccupied St. John's in the summer of 1697: they found the town abandoned, pillaged and every building destroyed. The following year construction was begun at St. John's on a well-engineered fortification - Fort William - which was completed in 1700. [6]

During Queen Anne's War, the arrival of Governor Daniel d'Auger de Subercase in 1702 was beneficial. By giving seniority leave, he got rid of the undisciplined soldiers, and a grievance was removed when soldiers were supplied with free uniforms. The garrison was reinforced with Mi'kmaq, and privateers provided some defence at sea. [2] In 1705, Subercase attacked the English settlements. This expedition was a great success - only St. John's and Carbonear successfully resisted. Subercase had almost 500 regulars, French Canadians and Indians. He took the town of St. John, but the Fort William garrison held out and refused terms. After a five-week siege, Subercase retired to Placentia with all the booty his men and several hundred captive townspeople could carry. That summer, detachments of French and Indians attacked and burned out all English communities in Conception, Trinity and Bonavista Bays. Sporadic attacks continued throughout 1706, despite British reinforcement of the St. John's garrison.

The garrison numbered 250 by 1711. Governor Brouillan had previously estimated that the colony needed at least 300 soldiers to ensure an effective defence. [2]

In 1713, the French gave up their right to settlement in Newfoundland and established a new stronghold at Louisbourg on Cape Breton Island. British settlers replaced the French and their soldiers garrisoned the fortifications until 1811. [8]

After briefly occupying Fort Louis, under the command of Samuel Gledhill, the British built the redoubt Fort Frederick (Newfoundland) to help fortify their acquisition of Placentia. It served as the military headquarters for Newfoundland from 1721-1746. There was a report that the Mi'kmaq were involved in a raid of Pleasance during Father Rale's War in which they were said to have killed 200 English. Governor Drummer did not believe the report. [9]

By the 1740s, the British began construction of New Fort which overlaid the former Fort Louis. [10]

Key elements of the site today:

The visitor center features exhibits about the history of the fort, and the lives of the fishing families and soldiers who lived there.

Units at the garrison 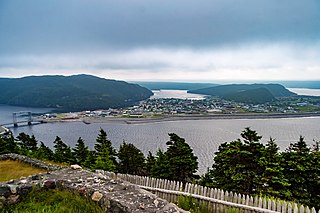 Placentia is a town located in the Canadian province of Newfoundland and Labrador. It consists of the Argentia Industrial Park and amalgamated communities of Townside, Freshwater, Dunville, Southeast, and Jerseyside.

Philippe Pastour de Costebelle was a naval officer and Governor of Newfoundland, born in Languedoc and died in Louisbourg. 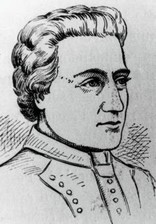 Louis de Pastour de Costebelle naval officer served as interim governor of Plaisance (Placentia), Newfoundland, before the arrival of Jacques-François de Monbeton de Brouillan in 1690. Costebelle came to Newfoundland as head of a detachment of soldiers in 1687. 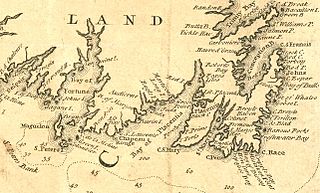 The Battle of St. John's was the French capture of St. John's, the capital of the British colony of Newfoundland, on 1 January 1709 [O.S. 21 December 1708], during Queen Anne's War. A mixed and motley force of 164 men led by Joseph de Monbeton de Brouillan de Saint-Ovide, king's lieutenant to Philippe Pastour de Costebelle, the French governor of Plaisance, quickly overwhelmed the British garrison at St. John's, and took about 500 prisoners.

Pierre Maisonnat dit Baptiste was a French privateer famous for the success he had against New England merchant shipping and fishing interests during King William's War and Queen Anne's War. Baptiste's crew members were primarily Acadians.

The Siege of St. John's was a failed attempt by French forces led by Daniel d'Auger de Subercase to take the fort at St. John's, Newfoundland during the winter months of 1705, in Queen Anne's War. Leading a mixed force of regulars, militia, and Indians, Subercase burned much of the town and laid an ineffectual siege against the fort for five weeks between late January and early March 1705. Subercase lifted the siege after running out of provisions and gunpowder. 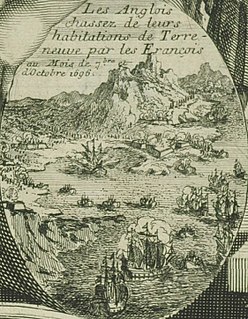 The Avalon Peninsula Campaign occurred during King William's War when forces of New France, led by Pierre Le Moyne d'Iberville and Governor Jacques-François de Monbeton de Brouillan, destroyed 23 English settlements along the coast of the Avalon Peninsula, Newfoundland in the span of three months. The campaign began with raiding Ferryland on November 10, 1696 and continued along the coast until they raided the village of Heart's Content

Fort William was a fort in St. John's built in 1698 to protect English interests on Newfoundland, primarily against French opposition. It was the original headquarters of the British garrison in Newfoundland. A second fort, known as Fort George was situated at the east end of the harbour connected by a subterranean passage with Fort William. On the south side of the Narrows, there was a third fortification called the Castle. Garrison headquarters were later moved to Fort Townshend, which was built between 1775-1779. 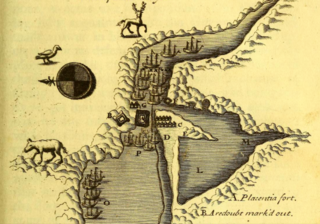 Fort Saint Louis was a French fort built in the 17th century on the island of Newfoundland at the time of the New France.

The Battle of Placentia (1692) was fought between the English and the French at Fort St. Louis in Placentia, Newfoundland and Labrador during King William's War. The battle lasted from 16 September until 21 September 1692.