Coagulopathy (also called a bleeding disorder) is a condition in which the blood’s ability to coagulate (form clots) is impaired. [1] This condition can cause a tendency toward prolonged or excessive bleeding (bleeding diathesis), which may occur spontaneously or following an injury or medical and dental procedures.[ citation needed ] Of note, coagulopathies are sometimes erroneously referred to as "clotting disorders"; a clotting disorder is a predisposition to clot formation (thrombus), also known as a hypercoagulable state or thrombophilia.

Coagulopathy may cause uncontrolled internal or external bleeding. Left untreated, uncontrolled bleeding may cause damage to joints, muscles, or internal organs and may be life-threatening. People should seek immediate medical care for serious symptoms, including heavy external bleeding, blood in the urine or stool, double vision, severe head or neck pain, repeated vomiting, difficulty walking, convulsions, or seizures. They should seek prompt medical care if they experience mild but unstoppable external bleeding or joint swelling and stiffness.[ citation needed ]

The normal clotting process depends on the interplay of various proteins in the blood. Coagulopathy may be caused by reduced levels or absence of blood-clotting proteins, known as clotting factors or coagulation factors. Genetic disorders, such as hemophilia and Von Willebrand disease, can cause a reduction in clotting factors. [2]

Anticoagulants such as warfarin will also prevent clots from forming properly. [2] Coagulopathy may also occur as a result of dysfunction or reduced levels of platelets (small disk-shaped bodies in the bloodstream that aid in the clotting process).[ citation needed ]

PT and PTT are good tools to check for coagulopathies

If someone has coagulopathy, their health care provider may help them manage their symptoms with medications or replacement therapy. In replacement therapy, the reduced or absent clotting factors are replaced with proteins derived from human blood or created in the laboratory. This therapy may be given either to treat bleeding that has already begun or to prevent bleeding from occurring.[ citation needed ]

One area of treatment is managing people with major bleeding in a critical setting, like an emergency department. [1] In these situations, the common treatment is transfusing a combination of red cells with one of the following options:[ citation needed ]

The use of tranexamic acid is the only option that is currently supported by a large, randomized, controlled clinical trial, and is given to people with major bleeding after trauma. [4] There are several possible risks to treating coagulopathies, such as transfusion-related acute lung injury, acute respiratory distress syndrome, multiple organ dysfunction syndrome, major hemorrhage, and venous thromboembolism. 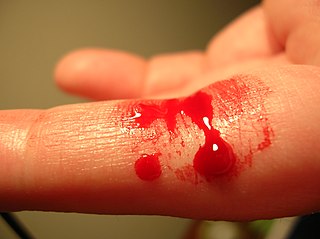 Bleeding, also known as a hemorrhage or haemorrhage, is blood escaping from the circulatory system from damaged blood vessels. Bleeding can occur internally, or externally either through a natural opening such as the mouth, nose, ear, urethra, vagina or anus, or through a wound in the skin. Hypovolemia is a massive decrease in blood volume, and death by excessive loss of blood is referred to as exsanguination. Typically, a healthy person can endure a loss of 10–15% of the total blood volume without serious medical difficulties. The stopping or controlling of bleeding is called hemostasis and is an important part of both first aid and surgery. The use of cyanoacrylate glue to prevent bleeding and seal battle wounds was designed and first used in the Vietnam War. Today many medical treatments use a medical version of "super glue" instead of using traditional stitches used for small wounds that need to be closed at the skin level.

Anticoagulants, commonly known as blood thinners, are chemical substances that prevent or reduce coagulation of blood, prolonging the clotting time. Some of them occur naturally in blood-eating animals such as leeches and mosquitoes, where they help keep the bite area unclotted long enough for the animal to obtain some blood. As a class of medications, anticoagulants are used in therapy for thrombotic disorders. Oral anticoagulants (OACs) are taken by many people in pill or tablet form, and various intravenous anticoagulant dosage forms are used in hospitals. Some anticoagulants are used in medical equipment, such as sample tubes, blood transfusion bags, and dialysis equipment. They can also be used as rodenticides.

Haemophilia B is a blood clotting disorder causing easy bruising and bleeding due to an inherited mutation of the gene for factor IX, and resulting in a deficiency of factor IX. It is less common than factor VIII deficiency. 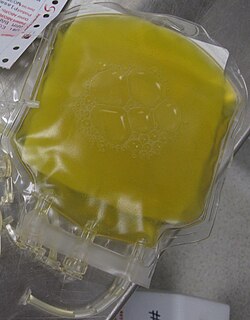 Blood plasma is a yellowish liquid component of blood that holds the blood cells in whole blood in suspension. It is the liquid part of the blood that carries cells and proteins throughout the body. It makes up about 55% of the body's total blood volume. It is the intravascular fluid part of extracellular fluid (all body fluid outside cells). It is mostly water (up to 95% by volume), and contains dissolved proteins (6–8%) (e.g. serum albumins, globulins, and fibrinogen), glucose, clotting factors, electrolytes (Na+, Ca2+, Mg2+, HCO3−, Cl−, etc.), hormones, carbon dioxide (plasma being the main medium for excretory product transportation) and oxygen. It plays a vital role in an intravascular osmotic effect that keeps electrolyte concentration balanced and protects the body from infection and other blood disorders.

In medicine (hematology), bleeding diathesis is an unusual susceptibility to bleed (hemorrhage) mostly due to hypocoagulability, in turn caused by a coagulopathy. Therefore, this may result in the reduction of platelets being produced and leads to excessive bleeding. Several types of coagulopathy are distinguished, ranging from mild to lethal. Coagulopathy can be caused by thinning of the skin, such that the skin is weakened and is bruised easily and frequently without any trauma or injury to the body. Also, coagulopathy can be contributed by impaired wound healing or impaired clot formation.

Hypovolemic shock is a medical emergency and an advanced form of hypovolemia due to insufficient amounts of blood and/or fluid inside the human body to let the heart pump enough blood to the body. More specifically, hypovolemic shock occurs when there is decreased intravascular volume to the point of cardiovascular compromise. The hypovolemic shock could be due to severe dehydration through a variety of mechanisms or from blood loss. 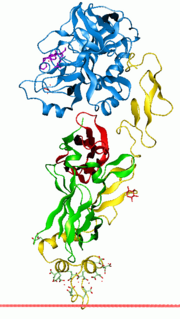 Tranexamic acid (TXA) is a medication used to treat or prevent excessive blood loss from major trauma, postpartum bleeding, surgery, tooth removal, nosebleeds, and heavy menstruation. It is also used for hereditary angioedema. It is taken either by mouth or injection into a vein.

Fresh frozen plasma (FFP) is a blood product made from the liquid portion of whole blood. It is used to treat conditions in which there are low blood clotting factors (INR>1.5) or low levels of other blood proteins. It may also be used as the replacement fluid in plasma exchange. Using ABO compatible plasma, while not required, may be recommended. Use as a volume expander is not recommended. It is given by slow injection into a vein.

Thromboelastography (TEG) is a method of testing the efficiency of blood coagulation. It is a test mainly used in surgery and anesthesiology, although increasingly used in resuscitations in Emergency Departments, intensive care units, and labor and delivery suites. More common tests of blood coagulation include prothrombin time (PT,INR) and partial thromboplastin time (aPTT) which measure coagulation factor function, but TEG also can assess platelet function, clot strength, and fibrinolysis which these other tests cannot.

Hypoprothrombinemia is a rare blood disorder in which a deficiency in immunoreactive prothrombin, produced in the liver, results in an impaired blood clotting reaction, leading to an increased physiological risk for spontaneous bleeding. This condition can be observed in the gastrointestinal system, cranial vault, and superficial integumentary system, effecting both the male and female population. Prothrombin is a critical protein that is involved in the process of hemostasis, as well as illustrating procoagulant activities. This condition is characterized as an autosomal recessive inheritance congenital coagulation disorder affecting 1 per 2,000,000 of the population, worldwide, but is also attributed as acquired.

Antifibrinolytics are a class of medication that are inhibitors of fibrinolysis. Examples include aminocaproic acid and tranexamic acid. These lysine-like drugs interfere with the formation of the fibrinolytic enzyme plasmin from its precursor plasminogen by plasminogen activators which takes place mainly in lysine rich areas on the surface of fibrin. These drugs block the binding sites of the enzymes or plasminogen respectively and thus stop plasmin formation.

Congenital hypofibrinogenemia is a rare disorder in which one of the two genes responsible for producing fibrinogen, a critical blood clotting factor, is unable to make a functional fibrinogen glycoprotein because of an inherited mutation. In consequence, liver cells, the normal site of fibrinogen production, make small amounts of this critical coagulation protein, blood levels of fibrinogen are low, and individuals with the disorder may suffer a coagulopathy, i.e. a diathesis or propensity to experience episodes of abnormal bleeding. However, individuals with congenital hypofibringenemia may also suffer episodes of abnormal blood clot formation, i.e. thrombosis. This seemingly paradoxical propensity to develop thrombosis in a disorder causing a decrease in a critical protein for blood clotting may be due to the function of fibrin to promote the lysis or disintegration of blood clots. Lower levels of fibrin may reduce the lysis of early fibrin strand depositions and thereby allow these depositions to develop into clots.