Cutwork or cut work, also known as punto tagliato in Italian, is a needlework technique in which portions of a textile, typically cotton or linen, [1] are cut away and the resulting "hole" is reinforced and filled with embroidery or needle lace.

The cutwork technique originated in Italy at the time of the Renaissance, approximately the 14th, 15th, and 16th centuries. [3] Additionally in the Elizabethan era, cutwork was incorporated into the design and decoration of some ruffs. In a fashion sense, this type of needlework has migrated to countries around the world, [4] including the United Kingdom, India, and the United States. Cutwork is still prevalent in fashion today, and although different, is commonly mistaken for lace. The eyelet pattern is one of the more identifiable types of cutwork in modern fashion.

Hand cutworks is the most traditional form of cutwork. Here, areas of the fabric are cut away and stitch is applied to stop the raw edges from fraying. [5]

Laser cutwork allows for more precise and intricate patterns to be created. The laser also has the ability to melt and seal the edges of fabric with the heat of the laser. This helps against fabric fraying during the creation process. [5] Additionally, using a laser for cutwork enables the embroiderer or creator to achieve unique designs such as an 'etched look' by changing the depth of the laser cut into the fabric. 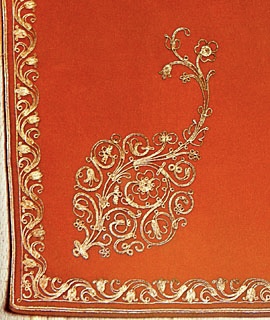 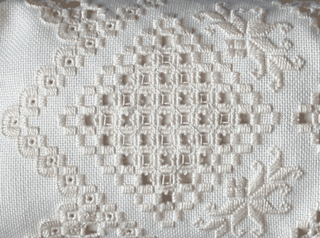 Drawn thread work is a form of counted-thread embroidery based on removing threads from the warp and/or the weft of a piece of even-weave fabric. The remaining threads are grouped or bundled together into a variety of patterns. The more elaborate styles of drawn thread work use a variety of other stitches and techniques, but the drawn thread parts are their most distinctive element. It is also grouped as whitework embroidery because it was traditionally done in white thread on white fabric and is often combined with other whitework techniques.

Lace is a delicate fabric made of yarn or thread in an open weblike pattern, made by machine or by hand. Generally, lace is divided into two main categories, needlelace and bobbin lace. There are other types of lace, such as knitted or crocheted lace. Other laces such as these are considered as a category of their specific craft. Knitted lace, therefore, is an example of knitting. This article considers both needle lace and bobbin lace. 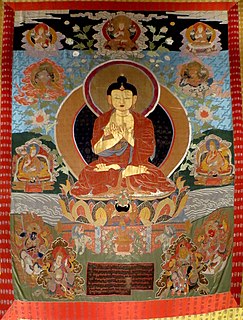 Appliqué is ornamental needlework in which pieces or patch of fabric in different shapes and patterns are sewn or stuck onto a larger piece to form a picture or pattern. It is commonly used as decoration, especially on garments. The technique is accomplished either by hand stitching or machine. Appliqué is commonly practised with textiles, but the term may be applied to similar techniques used on different materials. In the context of ceramics, for example, an appliqué is a separate piece of clay added to the primary work, generally for the purpose of decoration.

Aida cloth is an open, even-weave fabric traditionally used for cross-stitch embroidery. This cotton fabric has a natural mesh that facilitates cross-stitching and enough natural stiffness that the crafter does not need to use an embroidery hoop.

Broderie anglaise is a whitework needlework technique incorporating features of embroidery, cutwork and needle lace that became associated with England, due to its popularity there in the 19th century.

Chikan is a traditional embroidery style from Lucknow, India. Translated, the word means embroidery, and it is one of Lucknow's best known textile decoration styles. The market for local chikan is mainly in Chowk, Lucknow. 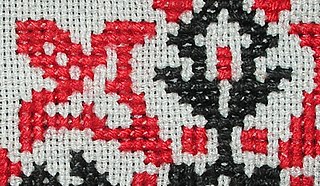 A balanced fabric is one in which the warp and the weft are of the same size. In weaving, these are generally called "balanced plain weaves" or just "balanced weaves", while in embroidery the term "even-weave" is more common.

Knitted fabric is a textile that results from knitting, the process of inter-looping of yarns or inter-meshing of loops. Its properties are distinct from woven fabric in that it is more flexible and can be more readily constructed into smaller pieces, making it ideal for socks and hats.

A selvage or selvedge is a "self-finished" edge of a piece of fabric which keeps it from unraveling and fraying. The term "self-finished" means that the edge does not require additional finishing work, such as hem or bias tape, to prevent fraying.

Brocade is a class of richly decorative shuttle-woven fabrics, often made in colored silks and with or without gold and silver threads. The name, related to the same root as the word "broccoli", comes from Italian broccato meaning "embossed cloth", originally past participle of the verb broccare "to stud, set with nails", from brocco, "small nail", from Latin broccus, "projecting, pointed".

The lace curtain machine is a lace machine invented by John Livesey in Nottingham in 1846. It was an adaptation of John Heathcoat's bobbinet machine. It made the miles of curtaining which screened Victorian and later windows. 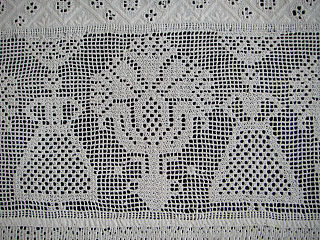 Hedebo embroidery covers several forms of white embroidery which originated in the Hedebo (heathland) region of Zealand, Denmark, in the 1760s. The varied techniques which evolved over the next hundred years in the farming community were subsequently developed by the middle classes until around 1820. They were applied to articles of clothing such as collars and cuffs but were also used to decorate bed linen.