Montenegro is a country in Southeast Europe on the Adriatic Sea. It borders Bosnia and Herzegovina to the northwest; Serbia and Kosovo to the east, Albania to the south and Croatia to the southwest. Montenegro has an area of 13,812 square kilometres and a population of 620,079. Its capital Podgorica is one of the twenty-three municipalities in the country. Cetinje is designated as the Old Royal Capital.

Vestby is a municipality in Akershus county, Norway. It is part of the Follo traditional region. The administrative centre of the municipality is the village of Vestby.

A census-designated place (CDP) is a concentration of population defined by the United States Census Bureau for statistical purposes only. CDPs have been used in each decennial census since 1980 as the counterparts of incorporated places, such as self-governing cities, towns, and villages, for the purposes of gathering and correlating statistical data. CDPs are populated areas that generally include one officially designated but currently unincorporated small community, for which the CDP is named, plus surrounding inhabited countryside of varying dimensions and, occasionally, other, smaller unincorporated communities as well. CDPs include small rural communities, colonias located along the U.S. border with Mexico, and unincorporated resort and retirement communities and their environs.

Požarevac is a city and the administrative center of the Braničevo District in eastern Serbia. It is located between three rivers: Danube, Great Morava and Mlava. As of 2011, the city has a population of 44,183 inhabitants, while the city administrative area has 75,334 inhabitants.

An urban area or urban agglomeration is a human settlement with high population density and infrastructure of built environment. Urban areas are created through urbanization and are categorized by urban morphology as cities, towns, conurbations or suburbs. In urbanism, the term contrasts to rural areas such as villages and hamlets and in urban sociology or urban anthropology it contrasts with natural environment. The creation of early predecessors of urban areas during the urban revolution led to the creation of human civilization with modern urban planning, which along with other human activities such as exploitation of natural resources leads to human impact on the environment.

An urban area or tätort in Sweden has a minimum of 200 inhabitants and may be a city, town or larger village. It is a purely statistical concept, not defined by any municipal or county boundaries. Urban areas referred to as cities or towns for statistical purposes have a minimum of 10,000 inhabitants. In 2010, there were 1,956 urban areas in Sweden, covering 85% of the Swedish population.

Herceg Novi is a coastal town in Montenegro located at the entrance to the Bay of Kotor and at the foot of Mount Orjen. It is the administrative center of the Herceg Novi Municipality with around 33,000 inhabitants. Herceg Novi was known as Castelnuovo between 1482 and 1797, when it was part of Ottoman Empire and the Albania Veneta of the Republic of Venice. It was a Catholic bishopric and remains a Latin titular see as Novi. Herceg Novi has had a turbulent past, despite being one of the youngest settlements on the Adriatic. A history of varied occupations has created a blend of diverse and picturesque architectural style in the city. 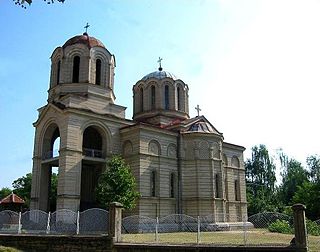 Lebane is a town and municipality located in Jablanica District of southern Serbia. According to the 2011 census, the town has a population of 10,062 inhabitants, while the municipality has 20,000 inhabitants.

The distribution of white South Africans is fairly evenly spread. They currently make up between 8 and 9% of the total population and number around 4.5–5 million. They are found in large numbers in practically every province in South Africa, although always as a minority, and are high in concentration in large cities.

Media related to Cities in Montenegro at Wikimedia Commons