Livingston is the county seat of Park County, Montana, United States. [4] It is in southwestern Montana, on the Yellowstone River, north of Yellowstone National Park. Its population was 7,044 at the 2010 census.

The founding of the small historical railroad and ranching town of Livingston is a direct result of the Northern Pacific Railway (NPR). This site became a centralized point in the Rockies and the NPR's location for railroad shops to service their steam trains before ascending the Bozeman Pass, the line's highest point, located immediately west. Livingston also became the first gateway town to America's first national park, Yellowstone, which the NPR promoted heavily to visitors from the East. The NPR also operated a branch line running 50 miles south through Paradise Valley, first to Cinnabar station and later to Yellowstone's north entrance in Gardiner.

Downstream the Yellowstone River, about 3 miles from present-day Livingston, an old fisherman named Amos Benson built a log cabin in 1872. This is where a ferry, a trading post and a small community called Benson's Landing was. [5] Across the river from Benson's Landing in June 1882 was the camp of about 40 tents of the Northern Pacific survey crew. This is where they thought the supply store site they were looking for should be. On July 14, 1882, a man who worked for the Northern Pacific named Joseph J. McBride arrived with orders to find another site to build the store. On July 16, George H. Carver, who became a major local businessman and political leader, arrived at the site of present-day Livingston. Carver and McBride became the first local residents when they pitched their tents on the 16th. Also on the 16th arrived 30 freight wagons drawn by 140 oxen, carrying 140,000 lbs. of merchandise. The supply store was to be of Bruns and Kruntz, contractors. Eventually the tents gave way to log cabins. All of Benson's Landing encampment moved up the river to Carver and McBride's camp within 10 days of the train's arrival.

This new settlement was called "Clark City" after Heman Clark, the principal contractor for the Northern Pacific from the Missouri westward. By fall the town was well established and a November 1882 poll counted 348 votes for delegates to congress. Clark City was on the southeast side at the East end of Lewis St. just southwest of the KPRK, and is now part of Livingston. B.F. Downen built the first permanent residence (out of wood) and Frank White owned the first saloon. Clark City eventually had 6 general stores, 2 hotels, 2 restaurants, 2 watchmakers, 2 wholesale liquor dealers, 2 meat markets, 3 blacksmiths, 1 hardware store, 30 saloons and a population of 500.

As Clark City was growing nobody realized that the Northern Pacific had marked on its maps a town called Livingston at the same place. The railroad officially reached Clark City on November 22, 1882. In October 1882 a post office was chartered for Clark City. In November, Livingston received its charter. That was when it was decided that Livingston be located a short distance away. Then Clark City residents bought lots in Livingston and moved. The birth of Livingston was the death of Clark City. The walking distance between them was considerable and Clark City became stream-and-bog urban wildland. Very few buildings still remain.

Livingston is along the Yellowstone River where it bends from north to east toward Billings and in proximity to Interstate 90. In July 1806 Captain William Clark of the Lewis and Clark Expedition camped on the city's present outskirts on the return trip east preparing to descend the Yellowstone River. Clark's party rejoined the Lewis party at the confluence with the Missouri River, near Williston, North Dakota.

Although small, Livingston has a number of popular tourist attractions. The Livingston Depot, built in 1902 after two predecessors, is a restored rail station that houses a railroad museum open from May to September. The Yellowstone Gateway Museum documents regional history from one of the oldest North American archaeological sites to Wild Western and Yellowstone history. The International Fly Fishing Federation's museum is an extensive introduction to a popular game sport and hosts annual enthusiast meetings. The city was inhabited for two decades by Calamity Jane and visited by a number of traveling members of European royalty.

Its economy is flat, and like the rest of the state, the unemployment rate is below the national average. Almost 50% of its workforce commutes to Bozeman,[ citation needed ] as well as the destination resort Chico Hot Springs 25 miles south, and various campsites and ranches in Paradise Valley. Recently the city has invested in attractions and accommodation for tourists visiting during the Lewis and Clark bicentennial years.

Livingston and its immediately adjacent area has 17 sites listed on the National Register of Historic Places, enumerated within Park County's NRHP listings.

It has a sister-city relationship with Naganohara, Japan.

Livingston has some of the warmest winters in the state, but the temperature can feel cold because Livingston is also one of the windiest places in the United States, having the 2nd highest average wind speed among airport/AMOS stations from 2000 to 2010. [13]

There were 3,356 households, of which 24.7% had children under the age of 18 living with them, 39.2% were married couples living together, 9.1% had a female householder with no husband present, 3.7% had a male householder with no wife present, and 48.0% were non-families. 40.4% of all households were made up of individuals, and 14.3% had someone living alone who was 65 years of age or older. The average household size was 2.07 and the average family size was 2.81.

Historically a railroad city until the mid-1980s, the city today depends significantly on tourism. The Federation of Fly Fishers is based in Livingston.

According to Livingston's 2011 Comprehensive Annual Financial Report, [17] the top private employers in Park County (the city's website refers to approximately a hundred public employees) are:

Mission Field is a public use airport located five miles east of town.

Livingston has a public library, the Livingston-Park County Public Library. [20]

Livingston Enterprise is a local daily newspaper, and the Livingston Current (preceded by the Park County Press and Park County Weekly) is a weekly newspaper. The monthly Montana Pioneer and bimonthly Atlantis Rising are also Livingston-based.

The city of Livingston has been a staging area or location for a number of films, including: 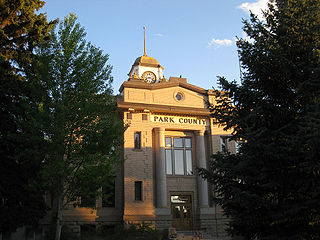 Park County is a county in the U.S. state of Wyoming. As of the 2010 United States Census, the population was 28,205. The county seat is Cody. 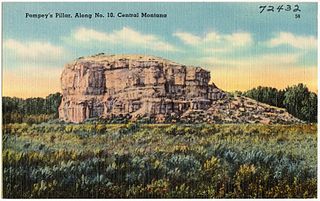 Park County is a county in the U.S. state of Montana. At the 2010 census, the population was 15,636. Its county seat is Livingston. A small part of Yellowstone National Park is in the southern part of the county. 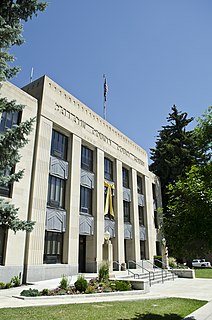 Gallatin County is located in the U.S. state of Montana. With its county seat in Bozeman, it is the third-most populous county in Montana, with a population of 89,513 in 2010. 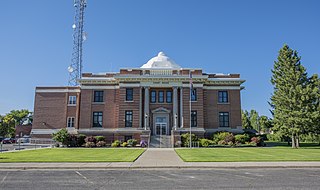 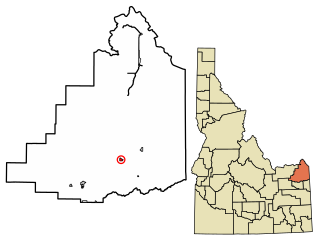 Island Park is a city in Fremont County, Idaho, United States. The city's population was 286 at the 2010 census, up from 215 in 2000. The city was incorporated by owners of the many lodges and resorts along U.S. Route 20 in 1947, primarily to circumvent Idaho's liquor laws that prohibited the sale of liquor outside of city limits. It is only 500 feet (150 m) wide in most locations yet, at 33 miles (53 km), claims to have the longest "Main Street" in the world.

Red Lodge is a city in and the county seat of Carbon County, Montana, United States. It is part of the Billings Metropolitan Statistical Area. The population was 2,125 at the United States Census, 2010.

Glendive is a city in and the county seat of Dawson County, Montana, United States, and home to Dawson Community College. Glendive was established by the Northern Pacific Railway when they built the transcontinental railroad across the northern tier of the western United States from Minnesota to the Pacific Coast. The town was the headquarters for the Yellowstone Division that encompassed 875 route miles (1,408 km); 546 (879) in main line and 328 (528) in branches with the main routes from Mandan, North Dakota, to Billings, Montana, and from Billings to Livingston. The town of Glendive is an agricultural and ranching hub of eastern Montana sited between the Yellowstone River and the Badlands. Makoshika State Park is located just east of Glendive.

Belgrade is a city in Gallatin County, Montana, United States. The population was 7,389 at the 2010 census. It is the largest city in Montana that is not a county seat. 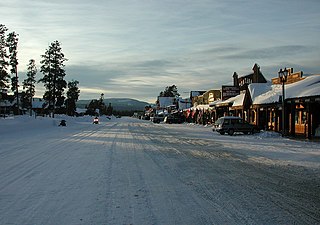 East Helena is a city in Lewis and Clark County, Montana, United States, approximately 5 miles (8 km) east of downtown Helena. The population was 1,984 at the 2010 census. It is part of the Helena Micropolitan Statistical Area.

Ennis is a town in Madison County, Montana, United States, in the southwestern part of the state. The population was 838 at the 2010 census.

Cooke City-Silver Gate is a census-designated place (CDP) in Park County, Montana, United States. The population was 140 at the 2000 census. It sits toward the northeast of Yellowstone National Park on a road remaining open during the winter connecting through Tower Junction to Mammoth and north to Livingston, Montana. During the summer the road opens eastward to connect to Red Lodge, Montana via the Beartooth Highway on a scenic route climbing to 10,947 feet in elevation through the Beartooth Mountains and across the Beartooth Plateau. Its chief industry is tourism, which during the winter includes skiing and snowmobiling.

Gardiner is a census-designated place (CDP) in Park County, Montana, along the 45th parallel. The population was 875 at the time of the 2010 census. 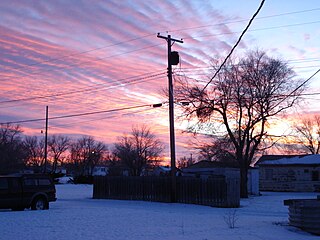 Terry, incorporated in 1910, is a town in and the county seat of Prairie County, Montana, United States. The population was 605 at the 2010 census.

Forsyth is a city in, and the county seat of, Rosebud County, Montana, United States. The population was 1,777 at the 2010 census. Forsyth was established in 1876 as the first settlement on the Yellowstone River, and in 1882 residents named the town after General James William Forsyth who commanded Fort Maginnis, Montana during the Indian Wars and the 7th Cavalry at the Wounded Knee Massacre. The town has long been a transportation nexus, starting with steamboats on the river and progressing to the Northern Pacific Railway and Interstate 94.

Huntley is a census-designated place (CDP) in Yellowstone County, Montana, United States. The population was 411 at the 2000 census. Huntley lent its name to the Huntley Project, a federal irrigation project that began delivering water to the arid district in 1907. Today, Huntley is an eastern suburb of Billings and is located east of Shepherd and west of Worden.

Laurel is a city in Yellowstone County, Montana, United States. It is the third largest community in the Billings Metropolitan Statistical Area, and is located in the Yellowstone Valley, as an east–west terminal division point of the Burlington-Northern Railroad. The population was 6,781 at the 2010 census.