The Manipur Legislative Assembly is the unicameral legislature of the Indian state of Manipur.

Members of the Manipur Legislative Assembly 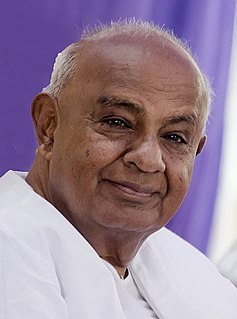 Haradanahalli Doddegowda Deve Gowda is an Indian politician from the state of Karnataka. He served as the 12th prime minister of India from 1 June 1996 to 21 April 1997. He was previously the 14th Chief Minister of Karnataka from 1994 to 1996. He presently is a Member of Parliament in the Rajya Sabha representing Karnataka. He is the National President of the Janata Dal (Secular) party.

National Democratic Alliance (NDA) is an Indian big tent political alliance led by the right-wing Bharatiya Janata Party (BJP). It was founded in 1998 and currently controls the government of India as well as the government of 17 Indian states, and 3 Union Territories. 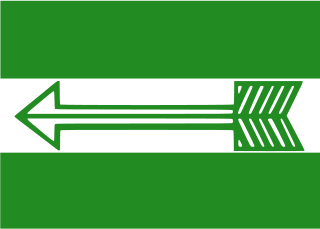 Janata Dal (United) abbreviated as JD(U) is a centre-left Indian political party with political presence mainly in eastern and north-eastern India. JD(U) is recognised as a state party in the states of Bihar and Arunachal Pradesh and is a part of government in Bihar. JD(U) heads the government in Bihar and has remained the second largest party in Arunachal Pradesh. JD(U) won 16 seats in the 2019 Indian general election, making it the seventh largest party in the Lok Sabha. The party operates on the ideologies of socialism, secularism and integral humanism. 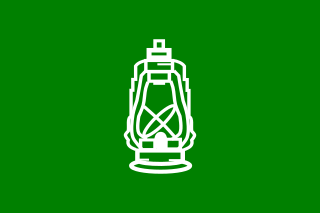 The Rashtriya Janata Dal is an Indian political party, based in the states of Bihar and Jharkhand. The party was founded in 1997 by Lalu Prasad Yadav.

The All India Trinamool Congress, colloquially the Trinamool Congress is an Indian political party which is predominantly active in West Bengal. The party is led by Mamata Banerjee, the current Chief Minister of West Bengal, who has led the state since 2011. It is currently the fifth-largest party in the Lok Sabha with 21 seats.

Raman Singh is an Indian politician and Former Chief Minister of Chhattisgarh. Currently, he is the National Vice-President of the Bharatiya Janata Party. He is also an ayurvedic practitioner. He is also the longest serving CM of Chhattisgarh for 15 years.

United Progressive Alliance (UPA) is a big tent centre-left political alliance of predominantly left-leaning political parties in India formed after the 2004 general election. The largest member party of the UPA is the Indian National Congress (INC), whose president Sonia Gandhi is chairperson of the UPA. It formed a government with support from some other left-aligned parties in 2004 after no single party could get the majority on its own.

The Naga People's Front (NPF) is a regional political party in Nagaland and Manipur, India. It headed the Nagaland government with the Bharatiya Janata Party, as part of the Democratic Alliance of Nagaland from 2003 to 2018. Dr. Shürhozelie Liezietsu is the president of the party. Till 16 January 2018 Neiphiu Rio, the Lok Sabha member from the lone constituency of Nagaland was the main leader of the party. On 22 March 2004 the NPF absorbed the Nagaland Democratic Party. 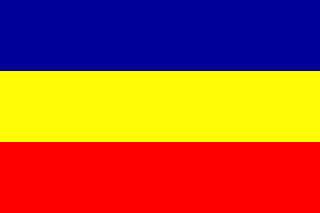 Sikkim Democratic Front (SDF) is a regional political party in the Indian state of Sikkim. It was the ruling party in Sikkim from 12 December 1994 to 23 May 2019.

Adaguru Huchegowda Vishwanath is an Indian politician from Karnataka state. He is a leader of Bharatiya Janata party. He is a Nominated Member of Karnataka Legislative Council. He was the former president of Karnataka unit of the Janata Dal (Secular).

Sarbananda Sonowal is an Indian politician from Assam who is the current Minister of Ports, Shipping and Waterways and Minister of AYUSH in the Government of India. He is a Member of Parliament in the Rajya Sabha from Assam and also a member of the Cabinet Committee on Political Affairs. He is a former Chief Minister of Assam and a former MLA in Assam Legislative Assembly. Sonowal earlier served as the Assam state President of Bharatiya Janata Party (BJP) from 2012 to 2014 and again in 2015 to 2016. He has also served as the Minister for Sports and Youth Affairs, Government of India, from 2014 to 2016. He was chosen to be the Chief Minister of Assam after the 2016 Assam Legislative Assembly election and he became the first Chief Minister of the state from Bharatiya Janata Party. During the cabinet reshuffle on 7th July 2021, he was inducted to the 2nd Modi Cabinet. 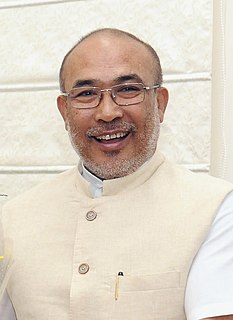 Nongthombam Biren Singh is an Indian politician, former footballer and journalist, who is currently serving as the Chief Minister of Manipur.

The Uttar Pradesh Legislative Assembly is the lower house of the bicameral legislature of Uttar Pradesh. There are 403 seats in the house filled by direct election using a single-member first-past-the-post system. 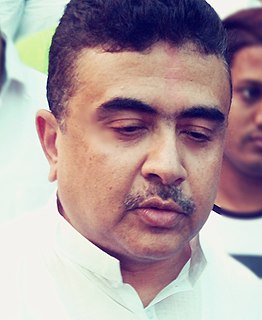 Suvendu Adhikari is an Indian politician from the Bharatiya Janata Party who is the current Leader of the Opposition in the West Bengal Legislative Assembly from 10 May 2021. He is a member of the West Bengal Legislative Assembly from Nandigram since May 2021 having defeated his opponent incumbent Chief Minister Mamata Banerjee. He previously served as the Minister of Transport, Irrigation and Water resource in West Bengal. He was a member of the 15th Lok Sabha and the 16th Lok Sabha (2014-2016), as an All India Trinamool Congress candidate, from Tamluk. 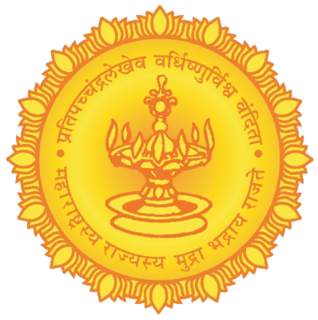 The North-East Democratic Alliance or NEDA is a political coalition that was formed on May 24, 2016 by Bharatiya Janata Party. The motive of the new political front was to protect the interest of the people of the region as well as uniting non-Congress parties in Northeast India. Himanta Biswa Sarma was appointed as the convenor of the front.

In March 2020, a political crisis was created in the state of Madhya Pradesh, India, due to the resignation of 22 sitting MLAs of the Indian National Congress party from the state's Legislative Assembly. It eventually led to the fall of the Kamal Nath government and the subsequent formation of the fourth Shivraj Singh Chouhan government in Madhya Pradesh.