Last updated September 08, 2022
A long, relatively wide body of water, connecting two larger bodies of water
This article is about the general geographic term. For "the Sound" between Denmark and Sweden, see Øresund.
For other uses, see sound (disambiguation).

In geography, a sound is a smaller body of water typically connected to a larger sea or ocean. There is little consistency in the use of "sound" in English-language place names. It can refer to an inlet, deeper than a bight and wider than a fjord, or a narrow sea or ocean channel between two bodies of land (similar to a strait), or it can refer to the lagoon located between a barrier island and the mainland. [1] [2]

A sound is often formed by the seas flooding a river valley. This produces a long inlet where the sloping valley hillsides descend to sea-level and continue beneath the water to form a sloping sea floor. The Marlborough Sounds in New Zealand are good examples of this type of formation.

Sometimes a sound is produced by a glacier carving out a valley on a coast then receding, or the sea invading a glacier valley. The glacier produces a sound that often has steep, near vertical sides that extend deep underwater. The sea floor is often flat and deeper at the landward end than the seaward end, due to glacial moraine deposits. This type of sound is more properly termed a fjord (or fiord). The sounds in Fiordland, New Zealand, have been formed this way.

A sound generally connotes a protected anchorage. It can be part of most large islands.

In the more general northern European usage, a sound is a strait or the narrowest part of a strait. In Scandinavia and around the Baltic Sea, there are more than a hundred straits named Sund, mostly named for the island they separate from the continent or a larger island.

In contrast, the Sound is the common international [3] short name for Øresund, the narrow stretch of water that separates Denmark and Sweden, and is the main waterway between the Baltic Sea and the North Sea. It is also a colloquial short name, among others, for Plymouth Sound, England.

In areas explored by the British in the late 18th Century, particularly the northwest coast of North America, the term "sound" was applied to inlets containing large islands, such as Howe Sound in Vancouver and Puget Sound in Washington State. It was also applied to bodies of open water not fully open to the ocean, such as Caamaño Sound or Queen Charlotte Sound in Canada, or broadenings or mergings at the openings of inlets, like Cross Sound in Alaska and Fitz Hugh Sound in British Columbia.

Along the east coast and Gulf Coast of the United States, a number of bodies of water that separate islands from the mainland are called "sounds". Long Island Sound separates Long Island from the eastern shores of the Bronx, Westchester County, and southern Connecticut. Similarly, in North Carolina, a number of large lagoons lie between the mainland and its barrier beaches, the Outer Banks. These include Pamlico Sound, Albemarle Sound, Bogue Sound, and several others. The Mississippi Sound separates the Gulf of Mexico from the mainland, along much of the gulf coasts of Alabama and Mississippi.

The term sound is derived from the Anglo-Saxon or Old Norse word sund, which also means "swimming". [2]

The word sund is already documented in Old Norse and Old English as meaning "gap" (or "narrow access"). This suggests a relation to verbs meaning "to separate", such as absondern and aussondern (German), söndra (Swedish), sondre (Norwegian), as well as the English noun sin, German Sünde ("apart from God's law"), and Swedish synd. English has also the adjective "asunder" and the noun "sundry', and Swedish has the adjective sönder ("broken").

In Swedish and in both Norwegian languages, "sund" is the general term for any strait. In Swedish and Nynorsk, it is even part of names worldwide, such as in Swedish "Berings sund" and "Gibraltar sund", and in Nynorsk "Beringsundet" and "Gibraltarsundet". In German "Sund" is mainly used for place names at the Baltic Sea like Fehmarnsund, Strelasund, and Stralsund.

Puget Sound, as seen from the Space Needle in Seattle, Washington 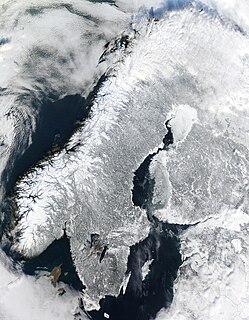 The Scandinavian Peninsula is a peninsula located in Northern Europe, which roughly comprises the mainlands of Sweden, Norway and the northwestern area of Finland.

Firth is a word in the English and Scots languages used to denote various coastal waters in the United Kingdom, predominantly within Scotland. In the Northern Isles, it more usually refers to a smaller inlet. It is linguistically cognate to fjord, which has a more constrained sense in English. Bodies of water named "firths" tend to be more common on the Scottish east coast, or in the southwest of the country, although the Firth of Clyde is an exception to this. The Highland coast contains numerous estuaries, straits, and inlets of a similar kind, but not called "firth" ; instead, these are often called sea lochs. Before about 1850, the spelling "Frith" was more common.

The Strait of Georgia or the Georgia Strait is an arm of the Salish Sea between Vancouver Island and the extreme southwestern mainland coast of British Columbia, Canada and the extreme northwestern mainland coast of Washington, United States. It is approximately 240 kilometres (150 mi) long and varies in width from 20 to 58 kilometres. Along with the Strait of Juan de Fuca and Puget Sound, it is a constituent part of the Salish Sea. 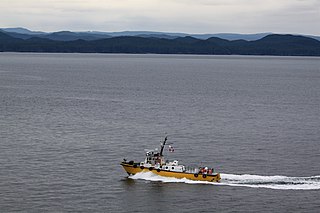 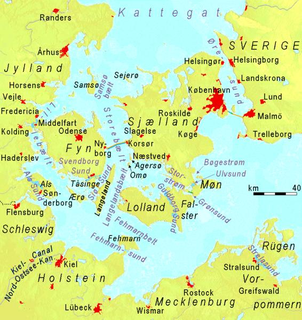 The Danish straits are the straits connecting the Baltic Sea to the North Sea through the Kattegat and Skagerrak. Historically, the Danish straits were internal waterways of Denmark; however, following territorial losses, Øresund and Fehmarn Belt are now shared with Sweden and Germany, while the Great Belt and the Little Belt have remained Danish territorial waters. The Copenhagen Convention of 1857 made all the Danish straits open to commercial shipping. The straits have generally been regarded as an international waterway. 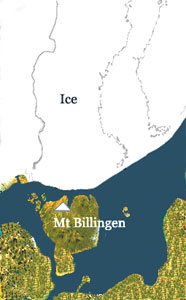 The Baltic Ice Lake is a name given by geologists to a freshwater lake that evolved in the Baltic Sea basin as glaciers retreated from that region at the end of the last ice age. The lake existed between 12,600 and 10,300 years Before Present (BP).

The Zona Austral is one of the five natural regions into which CORFO divided continental Chile in 1950 corresponding to the Chilean portion of Patagonia. It is surrounded by the Zona Sur and the Chacao Channel to the north, the Pacific Ocean and Drake's Passage to the south and west, and the Andean mountains and Argentina to the east. If excluding Chiloé Archipelago Zona Austral covers all of Chilean Patagonia.

The eastern coast of the Jutland Peninsula, consisting of Danish Jutland and German Schleswig-Holstein features a type of narrow bay called Förde in German and fjord in Danish. These bays are of glacial origin, but the glacial mechanics were different from those of Norwegian Fjords and also from those of Swedish and Finnish Fjards. 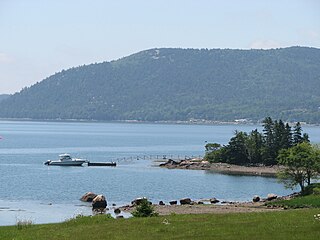 A fjard is a large open space of water between groups of islands or mainland in archipelagos. Fjards can be found along sea coasts, in freshwater lakes or rivers. Fjard and fjord were originally the same word with the general meaning of sailable waterway. In Scandinavia, fjords dominate along the North Sea coast while fjards dominate the Baltic Sea coast.

A gut is a narrow coastal body of water, a channel or strait, usually one that is subject to strong tidal currents flowing back and forth. The term is also used in some places for a small creek. 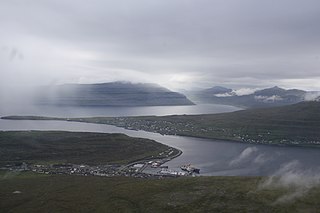 The Faroe Islands consist of 18 islands, most of which are deeply incised by fjords.