Woodseats is a district of Sheffield, South Yorkshire in the Graves Park ward. Historically, Norton Woodseats (grid reference SK347833 ) was a village that straddled Derbyshire Lane running from Four Lane Ends to Bolehill (now part of Graves Park), originally in Derbyshire but since 1901, part of the City of Sheffield. [1]

There are a number of public houses situated on Chesterfield Road:

Woodseats once boasted two cinemas but neither of these are still in existence.

The Chantrey Picture House Situated on Chesterfield Road this building was subsequently used as offices for a number of years by the construction company Gleesons.

Our Lady of Beauchief and St Thomas of Canterbury

A Roman Catholic church situated at the boundary of Woodseats and Meadowhead. Our Lady of St Thomas was founded at the request of local Catholics who had been meeting at the Big Tree public house due to the lack of a suitable church in the area. The first building was erected in 1910 and remained as a temporary structure until the existing building was erected and opened in 1932.

The first stone of the building was laid on 3 August 1911. The nave and aisles were built first and the church was consecrated on 25 July 1912, costing £5,100. The chancel, vestries and organ were added in 1933 and cost £4,460. The original design of the building was modelled on 14th century English designs and is the only Anglican church designed by the Catholic architects Hadfield & Hadfield.

The church was built using local rubble for the walls, Bath stone for the window tracery and nave arcade, and Westmorland slates for the roof.

Today St Chad's Church , situated on Linden Avenue, is a lively church which seeks to serve the community.

It has regular Sunday services at 9am and 11.00am as well as youth activities, small groups and a thriving Third Age Ministry reaching out to older people in the community.

Other places of note include: The Double Six Youth Club and Woodseats Scout Unit.

The building is step free access, with the Library being on the bottom floor, and with two lifts serving the Medical Centre, there are two Disabled Parking bays but the rest of the parking is for Staff only.

A station which used to have an incident desk, Woodseats Police Station lost this amenity in the mid-2000s. The station is a manned station, but has no public access. It is the base for the Sheffield South West Policing Team. [5]

Graves Park is situated around the area. Trees rise up on the hillside and the park is home to two playgrounds, tennis courts, golf course, animal farm, waterfall wood, and a large waterfall.

Darley Dale, also known simply as Darley, is a town and civil parish in the Derbyshire Dales district of Derbyshire, England, with a population of around 6,000. It lies north of Matlock, on the River Derwent and the A6 road. The town forms part of the urban area of Matlock and acts as a commuter town for workers there.

Meersbrook is a suburban district in the south-west of Sheffield, England bordered by Nether Edge to the west, Norton Lees to the south, Heeley to the north and the Meersbrook allotment site to the east. Until 1950 it was part of the Sheffield Ecclesall constituency and now forms part of the Sheffield Heeley constituency. The district falls within the Gleadless Valley ward of the city. The name comes from the stream, the Meers Brook, a tributary of the River Sheaf which means 'boundary brook' and in ancient times this, along with the River Sheaf formed the boundary between the Anglo-Saxon kingdoms of Northumbria and Mercia. It remained as the boundary between Yorkshire and Derbyshire into the 20th century. Meersbrook itself was once several small communities which have given many roads their names; Rush Dale, Carfield & Cliffe Field and in 1857 was known as Mears Brook.

Heeley is a former cluster of villages. Which all now form a suburb in the south of the City of Sheffield, England. The village has existed at least since 1343, its name deriving from Heah Leah, High Lea then Hely, meaning a high, woodland clearing. Originally Heeley was divided into three: Upper Heeley was around the intersection of Myrtle Road and Heeley Green, Middle Heeley was on the Gleadless Road at Well Road, and Lower Heeley was on the London Road around Artisan View. At the 2011 Census the village formed part of the Gleadless Valley ward of the City of Sheffield. 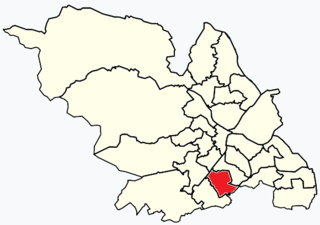 Graves Park ward—which includes the districts of Norton, Norton Lees, Norton Woodseats, and Woodseats—is one of the 28 electoral wards in City of Sheffield, England. It is located in the southern part of the city and covers an area of 5.8 km2. The population of this ward in 2011 was 16,705 people in 7,464 households. It is one of the five wards that form the Sheffield Heeley parliamentary constituency in the House of Commons. The districts of this ward were in the historic county of Derbyshire, but they have now been absorbed into the metropolitan borough of Sheffield, thus placing them in the ceremonial county of South Yorkshire.

Sherwood is a large district and ward of the city of Nottingham, in the English ceremonial county of Nottinghamshire. It is situated approximately 1.5 miles (2.4 km) north of Nottingham city centre. The population of the ward taken at the 2011 census was 15,414. It is bordered by Woodthorpe to the northeast, Mapperley to the east, Carrington to the south, New Basford and Basford to the west, and Daybrook and Bestwood to the north. 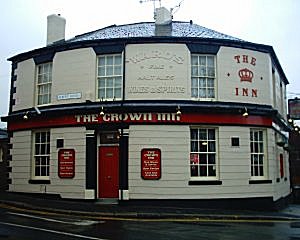 Chesterfield Road is a shopping street in Sheffield, England. It leads south from the suburb of Meersbrook to Woodseats, before becoming Meadowhead at the Abbey Lane junction, next to the Abbey pub. The road starts at Toll Bar bridge on the Meers Brook, the former boundary between Yorkshire and Derbyshire. There the road changes name from London Road to Chesterfield Road.

Norton Lees is a residential suburb in the Graves Park ward of the City of Sheffield, England located to the east of Woodseats.

Church Street is situated in the centre of Sheffield at the grid reference of SK353874. It runs for approximately 490 yards (450 m) in a westerly direction from its junction with Fargate and High Street to its termination at the crossroads formed by the junction with West Street, Leopold Street and Townhead Street. Church Street has its own Sheffield Supertram stop directly in front of the Sheffield Cathedral and it carries that name.

West Stockwith is a village within the Bassetlaw district of Nottinghamshire, England. The population at the 2011 census was 327. it lies on the west bank of the River Trent, 3 miles (4.8 km) north-west of Gainsborough and 1.5 miles (2.4 km) east of Misterton. West Stockwith is an ecclesiastical parish in the Church of England Diocese of Southwell and Nottingham with the parish church of St Mary the Virgin's Church, West Stockwith being built in 1722.

St Paul's Church, Sheffield, was a chapel of ease to Sheffield Parish Church.

Hillsborough is a suburb in north-west Sheffield, South Yorkshire, England. The centre of the district is popularly thought to be 'Hillsborough Corner' where Langsett Road, Middlewood Road, Holme Lane and Bradfield Road all meet. The Hillsborough ward population at the 2011 Census was 18,605.

Parkhead Hall, formerly Parkhead House and The Woodlands, is an English country house situated in the City of Sheffield in South Yorkshire. The hall is a grade II listed building and is located in the suburb of Whirlow close to the junction of Ecclesall Road South and Abbey Lane. The hall is difficult to view for the general public, being surrounded by high walls and housing, although a glimpse of its northern side can be seen from Ecclesall Road South.

Girlington is an area in Bradford, West Yorkshire, England. Girlington is located to the west of Bradford city centre. The majority population of Girlington are of South Asian origin in particular Pakistani, Afghan and Bangladeshi.

Frank Tory and Sons were an English family firm of Sheffield based architectural sculptors whose work enhances some of the city's finest late 19th century and early 20th century buildings. Apart from stone carving the family also worked in wood, marble, bronze and fibrous plaster. The firm operated from the early 1880s until the 1950s and consisted of Frank Tory and his twin sons Alfred Herbert and William Frank.

Aldborough Hatch is an area in Ilford in East London, England, within the London Borough of Redbridge. It is located 11.1 miles (18 km) east-northeast of Charing Cross. It is a semi-rural locality situated to the east of Barkingside and Newbury Park.