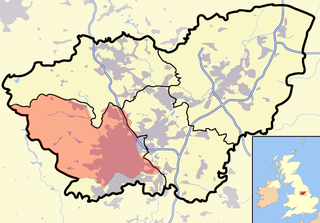 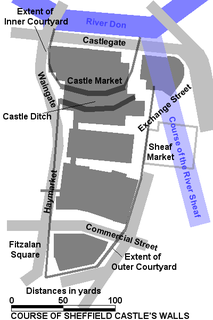 Sheffield Castle was a castle in Sheffield, England, constructed at the confluence of the River Sheaf and the River Don, possibly on the site of a former Anglo-Saxon long house, and dominating the early town. A motte and bailey castle had been constructed on the site at some time in the century following the Norman Conquest of England in 1066. This was destroyed in the Second Barons' War. Construction of a second castle, this time in stone, began four years later in 1270. 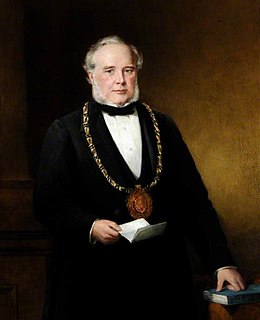 Sir John Brown, British industrialist, was born in Sheffield. He was known as the Father of the South Yorkshire Iron Trade.

Lady's Bridge is the oldest bridge across the River Don in the City of Sheffield, England. It is located in the central section of the city, linking the Wicker to the north with Waingate to the south.

The Royal Hallamshire Hospital is a general and teaching hospital located in Sheffield, South Yorkshire, England. It is in the city's West End, facing Glossop Road and close to the main campus of University of Sheffield and the Collegiate Crescent campus of Sheffield Hallam University. The hospital is run by the Sheffield Teaching Hospitals NHS Foundation Trust.

The Diocese of Hallam is a Latin Church ecclesiastical territory or diocese of the Catholic Church in England. The diocese comprises the whole of the City of Sheffield, and the surrounding towns of Rotherham, Doncaster, Barnsley, Chesterfield, the Peak District and areas of Worksop and Retford. It is a suffragan diocese in the ecclesiastical province of the metropolitan Archdiocese of Liverpool.

Cutlers' Hall is a Grade II* listed building in Sheffield, England, that is the headquarters of the Company of Cutlers in Hallamshire. It is located on Church Street, opposite Sheffield Cathedral, in Sheffield City Centre.

Sheffield Old Town Hall is a building in Waingate in central Sheffield, South Yorkshire, England, opposite Castle Market. It is a Grade II listed building.

High Street is one of the main thoroughfares and shopping areas in the city centre of Sheffield in South Yorkshire, England, located at the approximate grid reference of SK356874. High Street starts at the Commercial Street, Fitzalan Square and Haymarket junction and runs for approximately 400 metres west to conclude near the Sheffield Cathedral where it forms a Y-junction with Fargate and Church Street. High Street has the traditional wide variety of shops, financial institutions and eating places which are associated with any British town centre. 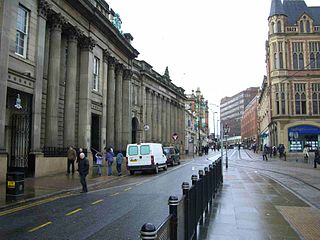 Church Street is situated in the centre of Sheffield, South Yorkshire, England, at the grid reference of SK353874. It runs for approximately 490 yards (450 m) in a westerly direction from its junction with Fargate and High Street to its termination at the crossroads formed by the junction with West Street, Leopold Street and Townhead Street. Church Street has its own Sheffield Supertram stop directly in front of the Sheffield Cathedral and it carries that name.

Mount Pleasant is an 18th-century mansion situated on Sharrow Lane in the Highfield area of the City of Sheffield in South Yorkshire, England. The house stands just under two km south of the city centre and is a grade II* listed building, it has been described as "one of the best 18th century houses in Sheffield". The adjacent former stables and coach house are also Grade II* listed. 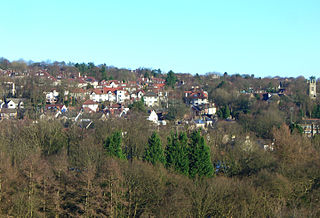