Christmas in Indonesia (locally known as Natal, from the Portuguese word for Christmas), which has approximately 25 million Christians (of which about 30% are Roman Catholics), [1] is celebrated with various traditions throughout the country. In the regions with a majority of Christians (Protestants and Catholics), there are Christmas celebrations with ceremonies and local food. [2] In big cities, the shopping centres are mostly decorated with plastic Christmas trees and Sinterklas (derived from the Dutch word Sinterklaas ). Most local television channels broadcast Christmas musical concerts and the annual, national Christmas celebration which is organised by the government. In addition to traditional foods, generally every Christmas Day is filled with cookies, like nastar (pineapple tart), kastengel (from Dutch word kaasstengel), or 'putri salju'. [3]

In the Papua region, after the Christmas mass, a Barapen (grilling stone) will be held, which is a ritual cooking of pork for the feast. The pork meat will be cooked in-between hot stones which are heated using wood. Instead of using matches, Papuan people will scrape the wood continuously to produce heat to set it on fire. In order to prepare the Barapen, the Papuan men will dig a hole to put the hot stones in. At the same time, Papuan women will prepare the vegetables, such as sweet potato, water spinach, fern, cassava, spinach, and papaya. At first, the hot stones are stacked on the base of the hole. Then, the pork and vegetables will be put into the hole, and covered with another layer of hot stones. The three stacks of this arrangement will cook the pork in the hole for half a day. The tradition of Barapen is an expression of gratitude, togetherness, sharing, and love which is characterised by eating pork together. [4] [5]

Particularly in Negeri Naku, South Leitimur, Ambon, there is a ceremony called cuci negeri (cleaning the nation). This ceremony symbolises the purification and liberation of sins from the local people and their environment. The cuci negeri is started with a gathering in the community function hall for each clan to hold their own traditional ritual. From there, the Ambonese will walk to the traditional function hall. They do not walk in silence, but sing and dance along with the sounds of tifa (traditional music instrument). Along the way, the women bring some offerings like betel, areca nut, and traditional drink called sopi. [6] Another unique characteristic of Christmas celebration in the Maluku is that the ship sirens will sound and church bells will be rung at the same time on Christmas Eve. [5] [7]

In Yogyakarta area, the Christmas celebration is filled with wayang kulit performance about the birth of Jesus Christ. The church mass is led by the priest wearing traditional Javanese costume (wearing beskap and blankon) and using the local language. Similarly with Eid celebration, the Christmas time is used to visit friends and family. Some of the kids in Yogyakarta can also get money in an envelope from the elders. [5] [7]

The pre-Christmas celebrations in Manado start from 1 December when the regional government officers go on the "Christmas Safari" – observe the mass in a different district every day. Some people in Manado have a tradition to join a carnival or visit and clean their families' graves. The series of Christmas celebrations will be ended in the first week of January with a festival called kunci taon. In this festival, there will be a carnival across the region in unique costumes. [5] [7]

Most of Christian villages in Bali are located on the south of this island. In those villages, road decorations called penjor (made from yellow coconut leaves) will be made for Christmas, which symbolises Anantaboga dragon. The Christmas celebration is affected by Hinduism – Balinese culture. [8]

In Bali, the Christmas tree is made from chicken feathers. This unique tree has been imported to some European countries. [9]

Torajan people celebrate Christmas by having a cultural festival called Lovely December. This festival consists of mass dancing, a culinary festival, cultural carnival, bamboo music performance, and handicraft exhibition. The festival is ended by fireworks and Lettoan procession which is held on 26 December. [5] [10] Lettoan is a ritual of having pig parade with cultural symbols that represent three dimensions of human life. Those three symbols are:

For the Batak in North Sumatera, the Christmas Day is always followed by sacrificing an animal as a result of people chipping in and saving the money months before. This tradition is called marbinda and shows togetherness and mutual cooperation. The sacrificed animal can be a pig, a buffalo, or an ox, and the meat will be shared to all the people that participate in the purchasing of the animal. [5] [12]

The Ministry of Tourism and Creative Economy is the ministry in Indonesia concerned with administration of tourism.

The presidential election was held in Indonesia on 9 July 2014, with former general Prabowo Subianto contesting the elections against the governor of Jakarta, Joko Widodo; incumbent president Susilo Bambang Yudhoyono was constitutionally barred from seeking a third term in office. On 22 July the General Elections Commission (KPU) announced Joko Widodo's victory. He and his vice president, Jusuf Kalla, were sworn-in on 20 October 2014, for a 5-year term. 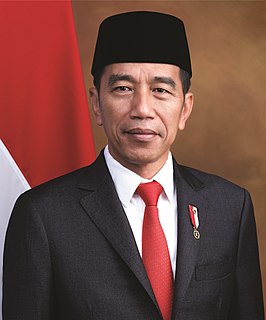 Joko Widodo, also known as Jokowi, is an Indonesian politician who is the 7th and current president of Indonesia. Elected in July 2014 as the first president not to come from an elite political or military background, he was previously the Mayor of Surakarta from 2005 to 2012, and the Governor of Jakarta from 2012 to 2014.

Balikpapan-Samarinda Toll Road or Balsam Toll Road is an expressway which is constructed to connect Balikpapan with Samarinda of East Kalimantan, as well as proposed new capital city of Indonesia. This is the first expressway in Kalimantan. The toll road is 99.3 kilometers long. Samboja-Samarinda section of the toll road is inaugurated by President Joko Widodo on 17 December, 2019.The toll road is expected to be totally completed by April, 2020.

Joko Pinurbo, born in Pelabuhan Ratu, Sukabumi, West Java 11 May 1962, is an Indonesian poet. His poetry is a mixture of narrative, irony, and self-reflection.

Iriana is the First Lady of Indonesia since 20 October 2014 and the wife of the current President of Indonesia, Joko Widodo.

The first inauguration of Joko Widodo as the seventh president of Indonesia took place on Monday, 20 October 2014 at the DPR/MPR Building, Jakarta. This ceremony marked the commencement of the first five-year term of Joko Widodo as president and second non-consecutive and final term of Jusuf Kalla as vice president.

The 2016 Samarinda Church bombing was a terrorist attack that occurred on 13 November 2016 when a man named Juhanda detonated a Molotov bomb in front of Oikumene Church in Samarinda Seberang, Samarinda, East Kalimantan, Indonesia, where children were playing. A toddler was killed in the incident and three other toddlers were injured. In September 2017, Juhanda and four others were convicted of the attack, with Juhanda sentenced to life imprisonment, while the others received sentences ranging from six to seven years.

The Indonesian Unity Party is a right-wing political party in Indonesia. The party was founded on 7 February 2015 by media tycoon Hary Tanoesoedibjo, owner of the MNC Group and business partner of US President Donald Trump. 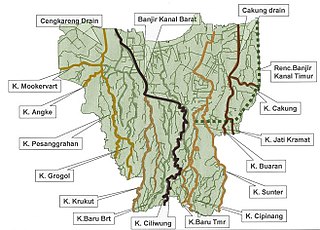 Pesanggrahan River is a river with the upstream in the Bogor Regency, flowing through the cities of Depok, Jakarta and Tangerang, Banten. The river passes the districts of Tanah Sereal, Bojong Gede, Sawangan, Limo, Kebayoran Lama, Pesanggrahan, Kembangan, and Kebun Jeruk before flowing into the Cengkareng Drain. Based on the 2005 data, 55 percent watershed area of Pesanggrahan River is occupied by housing, only 7 percent is still forests, 20 percent rice fields, and 13 percent other agriculture fields.

February 2017 Jakarta protests refer to a series of mass protest led by Islamist movements which took place on 11 February 2017 and 21 February 2017 in Jakarta, Indonesia, and dubbed as the Action 112 and the Action 212 respectively. The protests were aimed against the incumbent Governor of Jakarta Special Capital Region Basuki Tjahaja Purnama for an alleged blasphemy of the Quran, the Islamic holy book.

Mochamad Basuki Hadimuljono is an Indonesian bureaucrat who currently serves as the Minister of Public Works and Public Housing under Joko Widodo. Before his appointment as minister, he had worked for the Indonesian Ministry of Public Works for nine years.

Joko Widodo's presidential campaign in 2014 was announced on 14 March 2014, when his political party PDI-P declared him as the party's candidate for the upcoming election in 2014. He was then the Governor of Jakarta, and previously the Mayor of Surakarta. With former vice president Jusuf Kalla as his running mate, he was elected as President of Indonesia following election on 9 July and official KPU announcement on 22 July.

Joko Widodo's presidential campaign in 2019 is Joko Widodo's second presidential bid, following his first campaign's success in the 2014 presidential election. The campaign aimed for Widodo's re-election, with Islamic cleric Ma'ruf Amin as his running mate in a rematch against Prabowo Subianto.

Nduga massacre was a militia shooting of construction workers that occurred on 1 December 2018, in Nduga Regency, Papua, Indonesia. The shooting is considered to be part of the Papuan conflict. Indonesian authorities blamed Papuan armed separatists and labelled the attack a massacre. West Papua Liberation Army acknowledged responsibility.